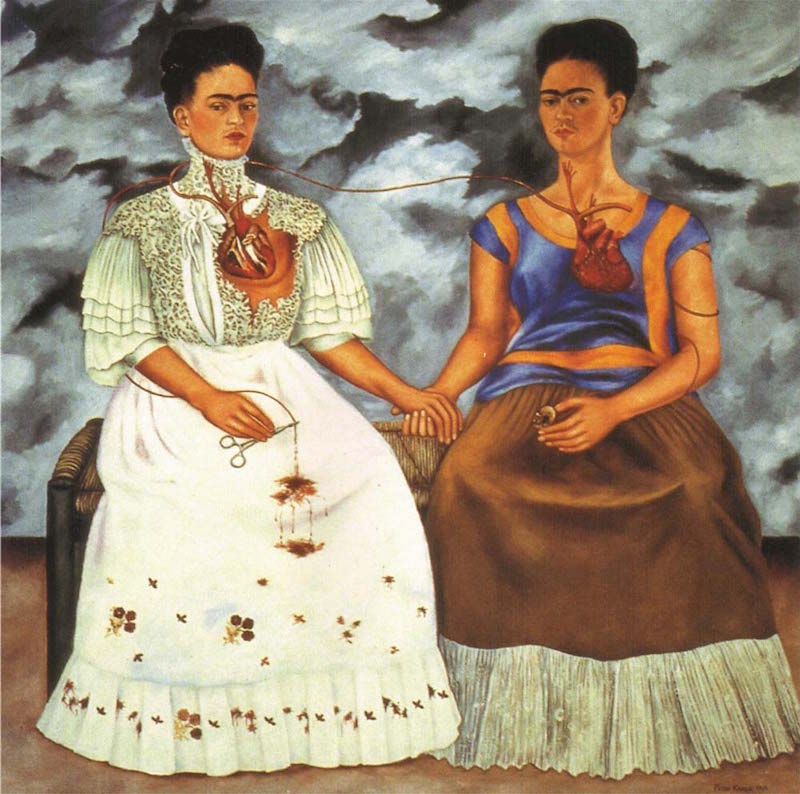 Andre Breton described Frida Kahlo’s work as a “ribbon around a bomb.” Yesterday was the Mexican surrealist painter’s 103rd birthday. I was lucky enough to see an exhibit of Kahlo’s work at the Walker Art Center in Minneapolis a few years ago in conjunction with her 100th birthday, co-curated by Hayden Herrera, the author of Frida. I’m sure it goes without saying, but the movie Herrera’s book was based on has nothing on seeing her work in person. Surrounded by her paintings and her biography (which was written on the wall, as art exhibits tend to do, but also deeply entwined in the work itself), I was overcome with the intensity of her art: the unabashed way she painted internal organs, the re-occurring face of her lover, and of course, the unrelenting stare she gives the viewer, which I find infinitely more elusive and captivating than Mona Lisa’s look. One thing I appreciated about the exhibit was being able to experience works besides her famous self-portraits - and by that I mean the typical torso-up Kahlos that often accompany her name. In fact, Kahlo’s self is present in each painting, but I had no idea about how much range her work encompassed. For example, in Family Tree, she painted her forebears, and depicts herself as a child: 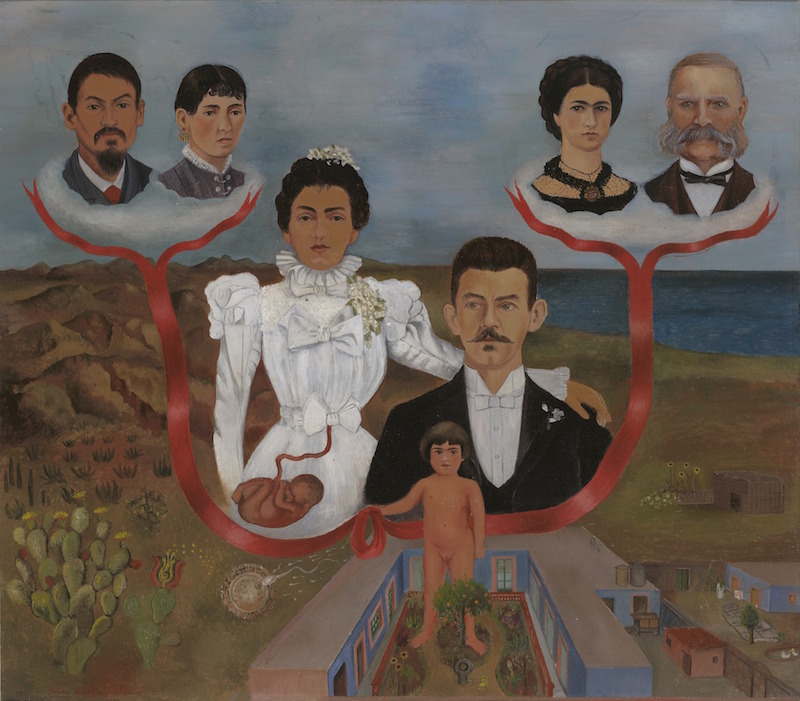 My grandparents, My Parents and I (Family tree)/Mis abuelos, mis padres, y yo (árbol genealógico), 1936

I was also struck by how extremely dark Kahlo’s work was. It’s incredible how she was able to render her emotional and physical pain so simply but powerfully through her paintings. Her rocky marriage to Diego Rivera, her multiple miscarriages, her continuous string of surgeries were detailed through symbolism and simplicity. But just because they were simple doesn’t mean they’re easily digestible. This can be seen in the painting “A Few Small Nips/Unos Cuantos Piquetitos” (click here to view the painting, but know that it is very graphic and triggering for violence against women), which she painted in 1935 after leaving Rivera once she learned of an affair he had with Frida’s younger sister. The painting depicts a story that Kahlo read in the newspaper: a man had murdered his girlfriend and then told the judge “But I only gave her a few small nips.” Kahlo expresses her agonizing emotional experience through the brutal treatment of another woman (ironically with love birds flying over the couple), since at the time she felt “murdered by life.” But her work isn’t all dark: there’s her vibrant use of color, the menagerie of animals that kept her company, and her unending drive to depict herself and put herself in the world through her art. And there’s the inspiration she gives women and artists today: for a wonderful read on Kahlo and disabled queer woman of color identity today, I recommend checking out Mia Minugus’s reflection on her blog (h/t to @cripchick):

I don’t know if Frida would have described herself as “disabled;” if she would have even used that language, that thinking. Would she have thought of herself as what we understand as “queer,” using whatever language and words she chose around her open bisexuality? I don’t know.

If you’d like to learn more about Kahlo’s life through your computer screen and have an hour and a half sometime (I didn’t even know you could make YouTube videos that long!) the opening lecture to the Walker’s exhibit by Hayden Herrera is online, though there is no closed-captioning.

Her works (and Rivera's) are so rich! It's a shame that she's just kind of reduced to a gimmick ("the chick with the unibrow"). like "American Gothic" people with the pitchfork or something.

Thanks for posting the lecture too. I'll watch it when I've got a minute. :]

I feel so lucky to have seen her work in person, I had forgotten how incredible it was.

(I'm also kind of embarrassed because <a href="http://www.feministing.com/archives/021760.html">Feministing<a> also did a belated birthday post about her and we used the same picture...it's a great picture though!)

It's also a nice chance for you (North)Americans to apreciate some Latino culture. Frida's use of color, the way she portrays herself in traditional colonial gowns and braided hair, the way she "naturalizes" blood, death and violence, it's all heavily influenced by Latin American (both native and conquered America) and sometimes more specifically Mexican culture.
I'm an Argentinian, so while as such I don't relate to her humourous portrayals of blood and death, I do relate to her portrayal of Latino women: and while I do not advocate nationalisms, I do feel proud as a Latino woman when I look at Frida's work, and I feel happy to be sharing my cultural heritage with the world.

If you're interested in learning more about Frida Kahlo, Devouring Frida by Margaret A. Lindauer provides a more-feminist approach to Frida Kahlo than Hayden Herrera's.