My introduction to this week’s sm[art]ist came from an exercise in a film class I had taken. The professor was having us list off as many female directors as we could think of and, as you could imagine, the list ended up being fairly short. In addition to Jane Campion, Amy Heckerling, and Julie Taymor, Maya Deren’s name came up. 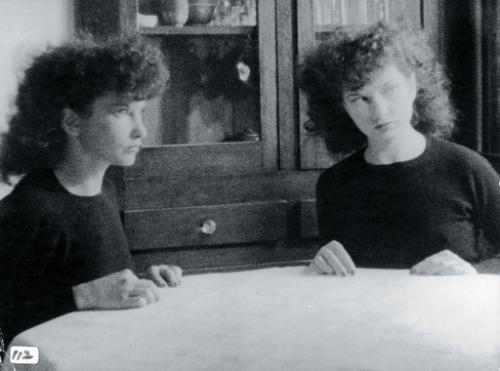 During her lifetime, Deren (1917-1961) was a dancer, choreographer, poet, film theorist, and experimental filmmaker. These various pursuits all informed her films, ranging from a “poetic psychodrama” (1943’s Meshes of the Afternoon) to an exploration of the body (1945’s A Study in Choreography for the Camera and 1948’s Meditation on Violence). Her work is unified by the reoccurring themes of restlessness, alienation, and isolation. Additionally, her film style has a distinct emphasis on rhythm, established through editing and looping footage. While her status as both a filmmaker and theorist puts her in a category with recognized luminaries like Jean-Luc Godard and Sergei Eisenstein, Deren and her work remain fairly unknown or relegated to discussions of experimental or feminist films.

Now, onto the clips!

Deren’s most well-known film was also her first. Meshes of the Afternoon (1943) was a collaboration with her second husband, Alexander Hammid. Like her later work, the film tackles questions of sexuality and taboo or shocking images. Additionally, Meshes of the Afternoon showcases Deren’s interest in the “instability of objects, uncanny visions and confusion surrounding the intentions of the male characters.”

Deren’s second film, At Land, came out in 1944 and is seen as being a critique of social rituals (demonstrated through Deren’s interaction with the myopic “civilized” dinner guests). This criticism is coupled with Deren’s overall distaste for Hollywood, stating that Hollywood “has been a major obstacle to the definition and development of motion pictures as a creative fine-art form” and claiming, “I make my pictures for what Hollywood spends on lipstick.”

Deren’s other films include A Study in Choreography for Camera (1945), Ritual in Transfigured Time (1946), Meditation on Violence (1948), and The Very Eye of Night (1952-1955). She was also the subject of the documentary In the Mirror of Maya Deren. Netflix her movies PRONTO! They are a must-see for, well, everyone!

AND she was friends with Anaïs Nin, erotica pioneer! WOOHOO!

As far as female directors, let's not forget Sofia Coppola, Adrienne Shelly, and Gurinder Chadha, to name three who just popped into my head. :)

...and Shola Lynch, and these ladies:
http://www.sistersincinema.com/filmmakers/index.html

The directors I listed were by no means supposed to represent a complete list of female filmmakers. There are so many others! Kátia Lund, Nora Ephron, Penny Marshall, Kelly Reichardt, Miranda July, Mira Nair, the list goes on.
Thanks for adding some of your favorites and extra thanks to Deesha for that great link!

Yes, Maya Deren was a pioneer. I started a video publishing company in 1994 and Deren's films were the very first that I released. For more information and clips on her experimental films, dance films or her documentary on voodoo and dance possession in Haiti "Divine Horsemen" please see her site http://www.re-voir.com/html/deren.htm.