You know when you come across a super rad zine artist and you’re really into their work, then you casually waltz into a comic shop, and you find one or two of their zines from years and years ago, but you get pretty bummed that the zine and comic shops in your area don’t have a sufficient selection, so you scour the Internet but can only find so many other things, then you realize you’ve wasted hours looking for who has the lowest shipping costs? You then proceed to read every interview with them, you learn all you can about their life, then you step back for a minute, and it hits you—maybe you’re a little obsessed with the artist and you feel weird about it, but you end up e-mailing them professing your undying love for them and their work anyway? Please tell me this isn’t something only I go through.

Regardless, starting right here, right now, I will be taking you on a journey, showing you why I love three incredible queer zine artists, and why you should love them too.

If you’re familiar with the amazingly wonderful anthology of queer artists Gay Genius, (which, if you’re not, you should find a copy and flip through it, or buy it from BitchMart because it’s great) edited by Annie Murphy, then you’ve probably heard the name Edie Fake thrown around. He did the cover art, among other heart-melting illustrations featured in the book. I mean, I know food can be really overtly sexual, but this—this was something else. I realized at that very moment that I needed more. What else had this mysterious Edie Fake made, why had it taken me so long to find him, and why weren’t we best friends? So, thus began my research, and the rest is… well, I already told you what happens when I find a zine artist whose work I love.

Hailing from basically all over the place, but most recently, Chicago, this dreamboat/artist extraordinaire manages to create the queer utopia we’ve always wished for, in tantalizing, death-defying, terrifying, but simultaneously beautiful ways. His mythically inspired characters, such as Gaylord Phoenix (the Gaylord-turned-bird-man), or Rico McTaco (the four-legged dyke), transcend gender and sexuality through their sensual and enlightening explorations of the body and how they experience pleasure, pain, fear, and delight. He said in an interview with the Rumpus about his comic series (recently collected into a book), Gaylord Phoenix, “I wanted the comic to be set in a queer world, where sex, sexuality, and gender were all messy, surreal and fluid. It’s important to me that those things don’t have to look like I’ve been told they should look like—because that’s not how I’ve ever seen them.” His comics and characters go far beyond the reaches of any queer ideal. Fake does all he can to throw away any preconceived notions of desire, allowing us to be released from the confines of what the hell we thought it meant to be queer, and into a phantasm to explore with open arms and open hearts. His comics have very little text, which in theory would make them quicker reads, but instead you get lost in the images, staring at each one until your brain forms its own enigmatic daydream. Each image in itself is a story to be told, a world to wander, a terror to be torn down, a body to touch, a love to want. Fake explains that “Gaylord’s exploits are in large part, about not being afraid: to be a sex freak, to have a freaky body, to want a freaky experience. I wanted very much to keep the story sex-positive and still talk about violence, rage and sadness, while maintaining a vision of overwhelming queer ecstasies.” These characters are freaky queers just like us, but more unabashedly so. They do not hide their meltdowns, their fears, or their confusions, but rather take these as opportunities to realize themselves, whether alone or with the help of others. Fake’s comics are stories of queer discovery. There are so many points when devouring his work where you might find yourself unsure whether to be deeply frightened or just really turned on, but this is the point! Fake finds ways to blur the lines between what might ordinarily disturb us with what scares us with what makes us hot and bothered, and that is absolutely radical. Now, go do your research and find everything that Edie Fake has to offer, or maybe get a tattoo from him, because he does that too. You won’t regret it.

Next up, we’ll sit down for a chat with Cristy C. Road! 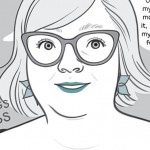 by Sara Searle
If having done all this work to feel okay in my body, I can do anything to help other people feel okay, that's really important to me.