I planned to write only about Sara Rahbar today, but in researching her and her work I found a few more amazing Iranian artists highlighted in the Saatchi Gallery’s 2009 exhibition “Unveiled: New Art From the Middle East”. This post will only feature Rahbar and Shadi Ghadirian, but I urge you to check out the work of Shirin Fakhim, Tala Madani, Laleh Khorramian and the other very talented artists from that exhibit.

Shadi Ghadirian’s first photography exhibition was in Tehran in 1997, and since then, her artwork has been exhibited everywhere from Berlin to Bangladesh. Her most well-known series are “Qajar” and “Like Every Day”, both conveniently available for viewing here. “Qajar” is a clever series that depicts the coexistence of tradition and modernity in Iran today; the women in the black-and-white or sepia photographs are posed in front of old-fashioned formal portrait backgrounds wearing eighteenth-century Qajar-style clothing with modern objects like stereos, televisions, mountain bikes or cans of Pepsi. Ghadirian created “Like Every Day” with many of the gifts she received for her wedding; the photographs show women dressed in everyday chadors with domestic objects - meat cleavers, brooms, frying pans, rubber gloves - in place of their faces. Ghadirian’s work is ironic social commentary that speaks to the disconnection between the ideals and realities of life as an Iranian woman. In her words:

“When I did the Qajar series of photographs, I had just graduated and the duality and contradiction of life at that time provided the motive for me to display this contrast: a woman who one can not say to what time she belongs; a photograph from two eras; a woman who is dazed; a woman who is not connected to the objects in her possession. It was very natural that after marriage, vacuum cleaners and pots and pans find their way into my photographs; a woman with a different look, a woman who no matter in what part of the world she is living, still has these kinds of apprehensions.” Sara Rahbar is a photographer and textile artist who lives and works between New York City and Tehran; her existence in the cultural divide between different nations manifests itself in her work as a fascination with flags and other symbols of cultural identity. Rahbar literally rips these national, religious and cultural boundaries to shreds by deconstructing and then reconstructing American and Iranian flags in combination with textiles heavily laden with cultural connotations - patterns, textures, colors and shapes that invoke the art of the ancient Persian Empire, the contrast between 20th-century Iran before the Islamic Revolution and its existence now as an Islamic Republic. The scraps of fabric and trinkets that Rahbar weaves into the flags are gathered from her travels around Iran. Much of Rahbar’s textile work displays her skill and training in fashion design, which she studied before focusing on film, photography and other art forms. Rahbar also doubles as the subject of her own photographs, again combining Iranian tradition and American perception by using a US flag as a hijab or wearing traditional Iranian dress with a ski mask in her series “Love Arrived and How Red”. Rahbar was recently featured in Time Out Dubai and Flash Art magazine. In a 2008 interview, Rahbar said her commitment to breaking down barriers and distaste for labels extends to her refusal to self-identify in any way, including as a feminist:

“The last thing I want to do is to take on another label. I care about certain issues and choose to take on certain subjects that are important to me and that I am passionate about. But I feel like all of these labels and names are causing so much separation between us, they create unnecessary spaces and gaps, they cause borders and barriers to go up. And I feel that they play a major role in keeping us divided, and separate. They put into place this mindset, that we are so different from one another. I don’t believe in the borders created by the devotion towards a flag, a country, or, a religion. The only thing I want to do with these titles that have created so much separation between us, is shed them.” Beautiful, simply beautiful. I enjoyed this post very much.

this was a great post--thank you for sharing! these images are absolutely incredible. The first Ghadirian photo looks like the photographic version of a kehinde wiley painting, no? all of these works, though, made me think of the recent Ghada Amer exhibition at the Feminist Art Center at the Brooklyn Museum. The embroidery of semi-pornographic scenes onto textiles--reminiscent of the birka, create really provocative and puzzling works... I think that her pieces pair nicely with Ghadirian's photos, especially. 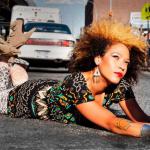