Swoon works in a combination of wheat-paste and paper cutout to create life-sized, figurative and graphic street art with strength and femininity. While a great deal of her work has been done outside the confines of a gallery, she was classically trained as a painter before adopting street art techniques.

The artist formerly known as Caledonia Curry studied painting at the Pratt Institute in Brooklyn and started doing street art around 1999 at age 19. She's also a member of the Justseeds Artists' Cooperative, a grass-roots, decentralized group of artists who believe in art as both personal expression and collective action. This group contributes graphics to struggles for justice, both in the studio and on the streets, collaboratively and individually, all over North America.

Her realistically rendered characters draw from life, often featuring her friends and family as characters going about everyday activities in a unique landscape of her own invention. Architectural elements become lacy patterns of light and shadow, the pieces are often flowy and uniquely delicate. Using paper shapes and inked prints, her use of both positive image and negative space hints at a broad range of inspiration from shadow puppets to german expressionist woodcuts.

(In San Francisco: Left, gallery show at the Luggage Store; right, at 24th and Hampshire)

Like other street artists, her work is intended to break the boundaries of a traditional gallery setting. While some street artists are focused primarily on their own mark, and while she works with her own visual style, she has been involved with expansive collaborations. Both her manner of working and her subject matter illustrate shared but individual experiences and awareness, private moments in public spaces. Her engagement with the ethical aspects of living and making art show a hint of idealism towards off-grid, barter-based cultures and economies based on sharing.

In early 2010, Swoon pasted up works around Philadelphia as part of Philagrafika 2010. For this exhibit, she installed printed paper figures, meant to be discovered by accident and left to be acted upon by their surroundings as they fade back into the background of the city landscape. They are meant to remind us that art and artifice can be found anywhere and everywhere. They are, as Swoon says, “a moment of recognition, a wink from another human presence which is there and not there.”

This past November, Swoon pasted up a few pieces in London. Just last month, Swoon was in Melbourne for a solo gallery show, and put up a few pieces on the street. If you're in New York, you may catch some of her work around Manhattan or in her home borough, Brooklyn.

She now plans to build a house on Piety Street in New Orleans. The Times-Picayune gushes, “If the finished structure turns out anything like the…model, it will be a towering pixie temple with a star-shaped floor plan, a zigzag wrap-around porch and pointy cupola, adorned with assorted dormers and flying filigree.” It is billed as an “art house”, a place for visiting artists to stay, as well as a sort of walk-in musical instrument (with “built-in percussion machines and electronic tone producers of some sort”).

It's quite an undertaking for an artist whose work has celebrated its transient nature. She was invited to New Orleans by Delaney Martin (director of New Orleans Airlift, an organization meant to help artists travel), and has spent six months collaborating with kinetic artist Taylor Shepherd and architect Wayne Troyer.

Her confident and feminine style are really inspiring, and while she's something of a street-art superstar, she is also something of an underdog in both the male-dominated fields of street art, and now, architecture. The Times-Picayune article written in November indicated that the art house project “lacks a name, a construction schedule and sufficient funding…” but given her past endeavors I would not be surprised if she's made progress on that front.

(See her “Swimming Cities of Serenissima, Venice”, here at Juxtapoz)

I can't wait to see what she comes up with next.

(Pick up her book from the 2005 show in NYC, titled Swoon, at Powells in paperback or on Amazon in hardcover.)

Wow, her work is absolutely incredible! Thank you for writing about it! 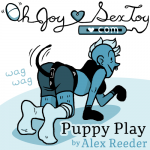 by Erika Moen
Oh Joy Sex Toy is a weekly NSFW comics series that graphically explores sex and sexuality. This week, learn all about puppy play.