Sm{art}: The Women of MoMA

Anthologies are tricky projects to undertake. They are by their nature exclusive, as their purpose is either to further a canon’s creation without challenging it, or to shatter boundaries and call for re-definitions and new critical perspectives. Either way, the vast majority of contributors to the anthologized media will be left out. Modern Women: Women Artists at the Museum of Modern Art is self-consciously trying to create both kinds of compilations at the same time. The book being about modern art specifically further complicates the viewing of these artists and their work—the editors are attempting to define and redefine a genre created to define and redefine. So it goes without saying that Modern Women is a pretty metaphysical literary and artistic experience. The above text is from a Guerrilla Girls poster from 1988, and is now included in the MoMA archives. This, I think, is an explicit example of why Modern Women, and, while we’re at it, the entire idea of art as a product, is both problematic and crucial. Art and protest are inextricably linked, but they are (obviously) uncomfortable bedfellows. Feminist artists (like the Guerrilla Girls, but  of course including thousands of others) are concerned with confronting art as an institution that someone is the boss of, which gets interesting when that someone* folds the modes of protest, of which said someone is the target, into the institution’s catalogue. The question, then, is whether that was the ultimate goal of the protest or not. Would that poster, framed and hung on a pristine white wall twelve feet away from a DuChamp toilet, have the same effect as it would written on neon paper, plastered on telephone poles around New York City? No. But is one platform inherently better or worse than the other? Harder to say.

Helpful in the interpretation of this tenuous undertaking are the essays that open and close Modern Women. Feminist art historian Griselda Pollock wrote, succinctly and powerfully:

“What is needed is not a belated recognition of hitherto-neglected women modernists as a second tier in the great modernist pantheon. We shall need different systems or modes of seeing, assessing, and understanding art in order not to perpetuate fundamentally flawed, physically invested, and selective versions of modernism.”

Or, even more succinctly, a letter written in 1971 to curator Lucy Lippard, from artist and activist Nancy Spero:

“Dear Lucy, the enemies of women’s liberation in the arts will be crushed. Love, Nancy.”

Spero also has work on display at MoMA, and in a semi-recent interview with PBS, she acknowledges that her works have operated as acts of protest throughout her career. One of the points Pollock raises after using that letter in her essay is that resistance to the revolution Spero sees coming is now more likely to come from institutions (ie MoMA) and their protocols, than from the larger American, artistic, and/or consumerist communities (as was more likely the case before and while Spero was writing).

Because the personal is here framed as (seemingly) unconditionally political, the portions of this book which highlight female artists in a straightforward, two-examples-of-work-and-a-writeup manner, feel jarring. The problem of retroactively including and presently explaining the inclusion of women in the hallowed halls of the Museum of Modern Art is painstakingly introduced, discussed, and then set aside, unless the artist being profiled is/was also a feminist activist. Two functions, seemingly disparate, are at work in these pages: first, to problematize the history of modern art as it relates to women and/or feminists and/or protest, and second, to advertise MoMA in a sophisticated, aesthetically pleasing, 500-page hardcover catalogue. I think both objectives are addressed pretty thoroughly, but the unease of seeing them exhibited so clearly in the same book remains after reading. And I mean that, I’m pretty sure, as a compliment.

*The “someone” of which I speak, by the way, is not necessarily one person. But museums DO get started, art DOES get bought and sold, artists ARE (or are NOT) invited to exhibit their work on a large scale, and books DO get edited. A Board of Trustees, sage as it is, does not run itself.

I am curious about what makes art feminist. Clearly, the content is not the only thing deserving examination. Display/distribution and form of the art object could also be feminist, as you have pointed out.

When you spoke about the layout of the anthology as jarring, my obsessive designer ears zeroed in and I quickly googled the book to look at the design for myself.

You're right, it's not quite subversive is it? The sleek sanserif and voluptuous use of white space definitely connote the institution being represented (advertised?), which could also be called a perpetuation of the "fundamentally flawed, physically invested, and selective versions of modernism," I think.

Some say graphic design was born out of modernism; does that mean all of our design assumptions are corrupted by "the great modernist pantheon."

I'm wondering, does feminist graphic design only exist when produced from a photocopier and labeled a zine?

How far do we scrutinize our feminist artist sisters? Where do we leave room for process? Where do show our solidarity?

Relevant: The Raw Essays of "So Sad Today" Make Me Feel Less Alone With My Anxiety 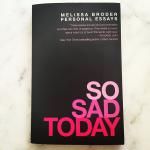 by Vanessa Willoughby
Melissa Broder needed a safe space to vent about her feelings of anxiety and depression. So she turned to Twitter.