When Kathryn Bigelow nabbed the Best Director Oscar in March for The Hurt Locker, critics such as The Guardian’s Richard Adams wrote perceptive analyses of the film’s erasure of Iraqi voices. However, in addition to Adams’ pointed critiques there was a bit of concern trolling as to the choice of subject matter frequently explored in Bigelow’s work, echoing some of the similar arguments presented - though in a far more problematic way - and published in Salon Magazine. In Martha P. Nochimson’s piece entitled “Kathryn Bigelow: Feminist pioneer or tough guy in drag?” Nochimson states:

But no cheers for Miss Kathy for breaking the glass ceiling by fabricating my worst cinematic nightmare. Quentin Tarantino, who should know better, having just directed a piercingly original ironic study of war and blood lust, dubbed Bigelow the “Queen of Directors” when she took the DGA award. I prefer the “Transvestite of Directors.” Looks to me like she’s masquerading as the baddest boy on the block to win the respect of an industry still so hobbled by gender-specific tunnel vision that it has trouble admiring anything but filmmaking soaked in a reduced notion of masculinity.

In addition to the mocking use of “Miss Kathy” and the hateful Transfail, I find the piece’s highly prescriptive tone quite problematic. While it’s accurate to state Bigelow likes making action pictures, it’s not an accurate representation of her entire filmography to suggest she has only garnered praise and awards because her films are so “muscular”. More to the point, if Nochimson wishes to make the case there were far more and better films directed in 2009 - I do believe that’s the better argument to present - it might help if she didn’t toss Nora Ephron’s Julie & Julia into the mix. Julie & Julia fails for a host of reasons, the least of which has to do with the gender of its director or intended audience. It failed for opting to focus on a lightweight, uninteresting, privileged, whiny protagonist instead of exploring the richly textured and glorious Julia Child narrative, which merely served as a plot device. I loved every second of screen time with Streep and Tucci and loathed every second spent with the main protagonist.

Bigelow is a masterful director, who for the most part doesn’t make films I particularly enjoy. I did not care for The Hurt Locker, but I did appreciate its attention to storytelling, character development and cinematography. Nora Ephron is a masterful writer/director, whose work I do really like. I count Silkwood’s script as one of my favorites. Ephron is a foodie who has found great artistic success in exploring her passion. That always gets big ups from me. Nevertheless, I find it really unfair to position these filmmakers who have decidedly different interests as cohorts when the only thing they share is gender identity. There is a place for each of their voices and I would much rather live in a world, which had room for both. I am not sure how denigrating the work of Bigelow somehow elevates the work of Ephron. Oh, right. It doesn’t.

Another issue I have is with Adams and Nochimson cherry picking examples from Bigelow’s filmography. When seeking evidence to support arguments that her films lack nuanced female characters, both seem to pretend that Bigelow’s stunning cyberpunk sci-fi cult flick Strange Days - co-written by James Cameron (ha) - doesn’t exist!

Strange Days stars Ralph Fiennes, Angela Bassett and Juliette Lewis, each of which can command the camera’s attention on their own, but are wonderful as trio. Fiennes stars as Lenny Nero - complete with informed sleaziness, as evident by his greasy hair - a former police officer turned hustler (as is the case in about 80% of films in this genre) who peddles other people’s memories on DAT tapes. Set in a futuristic dystopian 1999 Los Angeles the film centers on the murder of an influential and highly critical of police brutality hip hop star Jeriko One (Glenn Plummer), the discovery of snuff tapes that inadvertently come into Nero’s possession (another trope) and the end of the world. Bassett’s character Lornetta “Mace” Mason is a relief for Bassett’s fans who wondered when they might see her in a film where she possesses a shred of agency. Juliette Lewis - who, while gorgeous, is not one Hollywood typical positions as the “hot” one without some caveat (quirky, off center) - is positioned as the hot rocker chick. It’s a fun role for her and she seems to have a great time playing Faith Justin.

What I found most intriguing as I watched the film recently is how strongly invested I was in both female characters and how much better I understood the film’s racial positioning. When the film originally opened I felt the premise was an exploitation of Los Angeles’ Hip Hop community still reeling from the deaths of 2Pac and Biggie Smalls. But with some distance from the era, Strange Days does something most dystopian films don’t: it presents a future where we aren’t all unhappily oppressed in a similar fashion. Race, class, ability, gender identity, sexuality and issues of agency are still negotiated with difficulties - albeit a few glimmers of progress. Absent is the flattening of lived experiences frequently observed in other dystopian flicks. It’s provocative and works expertly with the complex characters and taut storytelling.

In Bigelow’s Strange Days, as well as her direction of Homicide: Life on the Street’s season six finale “Fallen Heroes Part I & II”, despite the “action” framing she utilizes to explore subjects of interest to her as a filmmaker, there is analysis of the oppression dynamics. There are female characters whose lives are portrayed in compelling manner. There are also many flaws too. Just like with male directors. Bigelow herself challenged critics who sought to frame her as a “female” director with this simple admonishment, “I am a filmmaker period.” And for those of us on the margins who struggle in our own lives to identify in ways which feel comfortable, I cheer Bigelow’s self identity, even if I might disagree with some of the artistic choices she has committed to film.

It's so frustrating that a woman can't make a film without being labeled as <i>something</i>. She's either a feminist, or a chick-flick-maker, which means she makes movies ONLY for women, or, apparently, "the transvestite of directors." Nochimson's assessment of Bigelow reveals that she hasn't actually bothered to think about Bigelow's films in more than a superficial way. One of the things that stands out about Bigelow's work is that she's not just making action flicks. Yes, men are the central characters in <i>most</i> of her films, but not in the same way as they are in mainstream films directed by men. Bigelow's films are <i>about</i> men, about the codes and behaviors particular to men, especially within groups and/or institutions.

What I really appreciate and enjoy about Bigelow's craft is how reverent she is to genre conventions, while still finding new things to say. Both she and Darnell Martin (another underrated female director) helmed episodes of the decidedly "manly" show <em>Homicide: Life on the Street</em>. Both women challenged the idea that female filmmakers "pink" things up and created very compelling episodes, which strictly adhered to the narrative conventions of the show. I would challenge anyone to view their eps and suggest there was anything other than stellar direction happening on their watch.

I agree wholeheartedly with your last statement. That is exactly how I frame Bigelow's body of work. Thanks so much for a really thoughtful and smart comment!

<i>What I really appreciate and enjoy about Bigelow's craft is how reverent she is to genre conventions, while still finding new things to say.</i>

I think this is one of the marks of quality work within a genre: creators that respect and reflect what has come before them without just reiterating.

I'm really excited to watch Strange Days because of this post! My Netflix queue is happier for it.

Relevant: Amber Tamblyn's Directorial Debut "Paint It Black" is a Firecracker of a Film 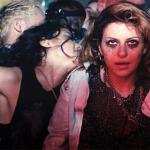 by Emma Rault
In new film "Paint It Black," Alia Shawkat shines as a punk rocker dealing with loss.