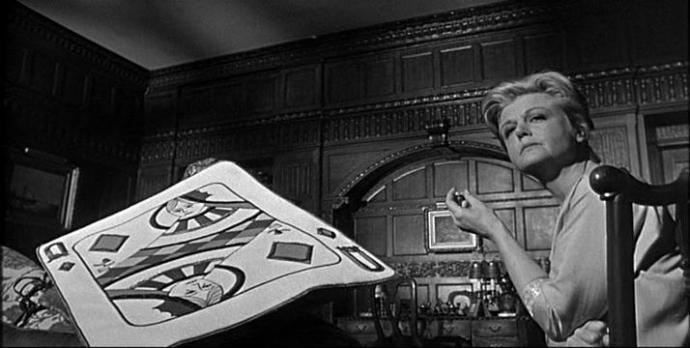 Whenever I am asked to name a film whose female actor’s performance lifted me out of the recliner I immediately think of Angela Lansbury’s chilling turn as Eleanor Iselin in the 1962 John Frankenheimer film The Manchurian Candidate. (Don’t bother with the soggy 2004 remake, which is awful in every way imaginable) The Manchurian Candidate is a palate cleansing suspense thriller worlds away from Lansbury’s sweet, meddling mystery writer J.B. Fletcher from Murder, She Wrote. If you are only familiar with Lansbury’s lighter fare, then be prepared to be scandalized! Lansbury’s command of craft is so utterly stunning, you will not believe this is the same woman who solves murders and rides her bike through the streets of Cabot Cove—the murder capital of the United States. Of her ferocious performance, film critic Roger Ebert states:

Lansbury’s Mrs. Iselin, nominated for an Academy Award, is one of the great villains of movie history. Fierce, focused, contemptuous of the husband she treats like a puppet, she has, we gather, plotted with the Russians and Chinese to use the Red Scare of “Iselinism” to get him into office, where she will run things from behind the scenes.

Manipulation of male characters is a frequently utilized trope in the suspense/thriller genre. Female youth and beauty is the currency used to acquire access, material possessions or elevated social status, with the mutual understanding that once a woman achieves her objective she is suddenly rendered docile, subservient and complicit in her own oppression. The Manchurian Candidate depicts an older woman whose ambitions are both insatiable and self destructive. Her agency is accompanied by sexual deviancy, substance dependency and an incestuous desire for her son Raymond, played by Laurence Harvey. Mrs. Iselin is a cautionary tale; an admonishment to women to eschew the desire for power or agency, or risk being felled by their ambitions—be they sexual or political. The Manchurian Candidate concerns itself with a brainwashing experiment gone awry, but exactly who is being brainwashed here? If examining the film from a feminist perspective the answer shouldn’t be surprising.

Great post, Snarky—I love Lansbury in <i>The Manchurian Candidate</i>! I think it's interesting that she has been playing older women for basically her entire career; she was only 37 when she played Mrs. Iselin. Maybe she wanted to bypass that middle-aged period when female actors find it hard to get work by playing characters decades older than she was? Smart career move!

It was a brilliant of Lansbury, who like Elaine Stritch claims to have been 40 since they were 20 years old! Thank you for your kind words!

I also loved Lansbury in Sweenie Todd: The Demon Barber of Fleet Street, though her part wasn't all that large. But she can play evil really well, in my humble opinion. Course, I also loved her in Bedknobs and Broomsticks.

THE LOVE SHE SOUGHT is worth checking out if it's on TV. In spite of the Lifetime-y title, she plays a tough bitch who's also a conservative Catholic who thinks Vatican II was unforgivable laxity (not the sort of person a lefty Jewish atheist like me tends to identify with). In spite of all that, she has a definite feminist streak in the way she tells the bishop what to do, refuses to relax her standards in order to marry, and bonds with a pregnant single teen.

THE DARK AT THE TOP OF THE STAIRS is pretty dated in trying be daring for 1960, but she's good as a down-to-earth, independent women who attracts Robert Preston in spite of being less conventionally attractive than his wife.

Of course you've seen this Snarky, but it always makes me all verklempt:

Angie, you always remind me how many great movies and performances I've never seen. Awesome analysis.

Thank you! It's a great film, very dark and disturbing. Frank Sinatra - who I didn't mention - is really good!

..who is also excellent in this film. I've seen it over a dozen times and never get tired of it. A classic in the highest order. One of the best political films ever made. And yeah, the remake blows. I can't even believe I went to see it as I generally boycott remakes of films that I adore. Which is why I didn't see the remake of "The Taking of Pelham 123", for example.