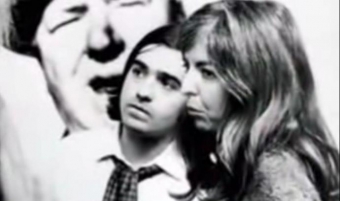 “I took a stress test and they said [State Department] I was way too liberal in my thinking.” - Three-time Oscar winner Thelma Schoonmaker pictured with long time collaborator Martin “Marty” Scorsese

At age six, I declared to my beloved daycare workers Joe and his wife, Ellyann I wanted to pursue a career in either social psychology—a phrase I had seen on one of my mother’s grad school textbooks—or film-making, if the social psychology racket didn’t pan out. “You want to make the costumes?” Ellyann asked, a reasonable assumption given I was probably wearing this outfit. “No,” I said taking another sip of juice, “I want to sit in the bossy chair and hold the camera.” Did I mention I was a tad on the precocious side as a child?

Meanwhile, hundreds miles away, Thelma Schoonmaker sat in her own bossy chair editing the landmark American film Raging Bull, for which she earned an Academy Award. Like cohort Dede Allen’s collaborations with Sidney Lumet, Schoonmaker’s editorial relationship with Martin Scorsese has created some of the most iconic film imagery in history.

Schoonmaker’s relationship with Scorsese began when she answered a classified ad for a job assisting a hack film editor who was butchering classic French films in order to make the films adhere to draconian American broadcast running times. Her experiences with the hack editor encouraged Schoonmaker to take a quickie film editing course at NYU where she met Scorsese. This meeting culminated in their first collaboration—Who’s That Knocking on My Door? (1967). Because of restrictive union rules, which stipulated Schoonmaker must jump through a series of hoops before she could gain entrance into the union—hoops, by the way, she’d already jumped through during the early part of her collaborations with Scorsese—Schoonmaker was unable to cut Scorsese’s 70s hot streak of films: Mean Streets, Taxi Driver and The Last Waltz.


But times changed; rules relaxed. Schoonmaker received a call from Scorsese to cut Raging Bull and they have been collaborators—save Scorsese’s Dylan film—ever since.

Shutter Island—recently released on DVD—demonstrates Schoonmaker is still the leader of the editorial pack, making the sharpest cuts in the business. Her passion for technical precision and fluency in film discourse is evident in all her editing choices. While I didn’t find the story presented in Shutter Island especially engaging, this was a bit of a blessing, as it gave me ample opportunities to study her process and isolate some of the sublime cuts she used in the film. I also enjoyed several retro-cuts, which I like to believe were love letters to her fanbase.

I should be a much bigger Scorsese fan, but I have two major problems with his films: depictions of women and the fact most of the time I need a tour guide to alert me of all the eye gouging, menace and gore awaiting me in each scene. Yes, the latter is definitely a me problem. That said, I’ve seen pretty much every Scorsese-Schoonmaker collaboration from Raging Bull onward.

It should come as no shock that my favorite Scorsese film is Casino—it is where I had the most opportunities to experience Schoonmaker’s work, which is surprisingly easy to do if your hands are not covering your face. Schoonmaker, while not as edgy as Dede Allen, is still quite a dazzling editor. Her choices are also deliberate, but diverge from Allen’s, as the visual language of their respective directors is much different, despite both having an interest in gritty narratives. It’s interesting to note the stylistic decisions Schooner and Allen make when presented with the same story. A double feature suggestion would be Robert Rossen’s The Hustler and Scorsese’s gritty film The Color of Money, which by the way, is the sequel to The Hustler. Oh yeah, and Mr. Salad Dressing himself, Paul Newman, stars in both! Any more excuses to avoid them?

Blogger’s note: It’s not your imagination. Scorsese does use the Rolling Stones’ Gimme Shelter in nearly all his trailers!

Thelma Schoonmaker winning Oscars for The Aviator and The Departed

In the late winter of 1990 Schoonmaker’s husband, the famed British filmmaker Michael Powell—The Red Shoes (1948), Black Narcissus—passed away. Since Powell’s death, Schoonmaker has dedicated the downtime between cutting Scorsese’s films to preserve her husband’s film. I’ve seen the restored Criterion Collection version of Black Narcissus and despite the material being quite dated (Deborah Karr as a nun) the visuals are still breathtaking.

Schoonmaker is a powerful role model for women in film. She is opinionated—bombing her State Department test for having the cheek to suggest South African Apartheid was bad, in a time where that really wasn’t the done thing—she is principled, and apparently is unafraid to give old “Marty” the business while cutting their films. So much of female contribution in film is either marginalized—as in the case of Kathryn Bigalow—or erased— as in the case of Dede Allen or Darnell Martin—but feminist film buffs have a hero and a trailblazer in the only person on the planet, a woman, Scorsese trusts to make all his gritty, “tough guy” films so difficult watch while eating dinner. Technical mastery is not solely the domain of males, regardless of how females are positioned in Hollywood. Sometimes it takes a lady film buff editor to make Pesci and De Niro look so bad-ass!

Film editing is why I went to college, and Schoonmaker was my heroine. Immaculate shot editing, right up there with George Tomasini, who did Psycho, home of my favorite edit sequence ever. Thanks so much for paying such loving attention to such an underappreciated woman.

<em>The Cutting Edge: Movie Editing</em> is a mediocre documentary about film editing, which features <em>both</em> Dede Allen and Thelma Schoonmaker talking about film. What's interesting is how this documentary is explicit in juxaposing film editing with knitting, tapestry and piecemeal work, which is usually the domain of woman. It's really kind of weird how Taratino specifically uses a female editor because the supposedly inherent nurturing capabilities of women!

I honestly can't make up my mind about Tarantino. I'll have to add that documentary to my queue on Netflix, though...

It's good, but not great. Concerns itself with a lot of films one doesn't typical think were noteworthy - Cold Mountain - but Spielberg's in it and he's cute!

I never thought of editing as being similar to needlework, sewing, tapestry, etc., but that makes sense! Interesting that analog piecemeal work is considered women's territory, but when technology is involved it's suddenly dudeland.

What I want to know is how they edited James Caan's hair onto De Niro's head.

Great article! Thanks so much for bringing to light the talents and contributions of such an admirable woman in Hollywood! I'm not the biggest fan of Scorsese either (for the reasons you mentioned) but I'll certainly view them with a closer eye now.