If you are among the record numbers of people who tuned in to yesterday’s Super Bowl, then you had the chance to see the controversial Focus on the Family ad starring Tim Tebow and his mother, Pam. And if the ad shocked you at all, it was probably due to how tame it turned out to be.

As you can see, though this spot garnered quite a bit of attention from feminist, pro-choice organizations (this one included), the word abortion is never mentioned – it is almost the opposite of controversial. Had the hype not happened, this 32-second snoozefest would have most likely elicited little more than a trip to the kitchen to get more nachos. One has to wonder then, was that the point?

By publicizing in advance that this ad was going to air during one of the most watched events of the year, and waiting for pro-choice advocates to go bonkers about it, Focus on the Family has painted themselves as the reasonable ones in this picture. They very well might be hanging out in their offices this morning, laughing about how they got everyone worked up over a cutesy ad that is so vague it could be for anything. “What’s the big deal?” (One could also ask why they chose to spend three million dollars to send a message that was so diluted, but if it made progressive groups look radical then it was probably mission accomplished.)

Of course, this commercial, cute and innocuous as it may be, was paid for by Focus on the Family, and their website is decidedly less neutral. As Latoya points out over at Jezebel this morning, the extended video doesn’t mince words when it comes to abortion the way the CBS version did. Pam Tebow tells women that they have “a choice”: to keep their babies. And Bob Tebow (Tim’s father) is even more straightforward: “God loves you and your baby. There are lots of people that will help you. Don’t kill your baby.”

Making the abortion debate about tiny cute babies is a tired tactic that completely misses the point. If a woman chooses to carry her fetus to term she is making a choice that will affect her and those around her long after that baby grows up – and that choice is hers to make. Not Focus on the Family’s, not Planned Parenthood’s, not even the Tebow family’s, no matter how happy and friendly they act.

The content of the Focus on the Family website is no real surprise, attempting to frighten women and men out of having abortions at just about every opportunity. They have never pretended to be a neutral (or even rational) organization, and as they are privately funded they have every right not to be. Of course, prior to this year, issues-based groups were not allowed to advertise during the Super Bowl, which is one of the reasons their ad was given so much media attention before it even aired.

What is a surprise (although in hindsight it shouldn’t have been) is how tame the Super Bowl spot actually turned out to be. It really could have been for just about anything wholesome – soup, hot cocoa, fuzzy socks – with very little editing. Was this an attempt to make pro-choice groups look hypersensitive and somewhat ridiculous? Was it successful? If it was, then it has only really succeeded in clouding the issue.

I DEFINITELY think the purpose of the ad was to make pro-choicers look like extremists. As a feminist and fellow pro-choicer, I stood on the grounds that it should be allowed to air due to basic freedom of speech and that looking at it solely as a commercial - it's about a woman expressing what she believes in. Obviously, there are pretty obvious purposes for the commercial, but I think it's good to just ignore those rather than bring it more publicity.

The choice was already made to engage in intercourse. People do know that's how babies are made right? It's not like these things just pop up out of nowhere. Sure there are the hard cases that make up a small percentage of abortions, like rape and incest, but that's not the issue here. Be responsible before you are pregnant.

Unfortunately, being responsible and being a hormone driven teenager doesn't always exactly go hand in hand.

I do not think that pam tebow is a great representatvie of people that have or consider having an abortion. At least it got people talking about the subject.

What an incredible waste of money.

I didn't see the commercial during the Super Bowl (I had to step out to get more food), so I watched it afterwards on the internet.... and said "What a fucking lame and pointless ad." And the fact that they wasted three million dollars on this just shows what fucking hypocrites these people are. They're not going to get donations for this ad, if anything, people were sitting there scratching their heads wondering what the hell they watched.

Oh well, if it means that a bigoted organization like Focus on the Family is three million dollars poorer, sucks for them!

Well I knew intellectually, but only from knowing the background of the ad. The ad itself didn't really say anything IMO.

But it seems that if we want to respond to something like this, the best way is to have Planned Parenthood submit an ad. Then watch the fireworks!

All of the hype surrounding this ad resulted in successfully highlighting the unhinged hysteria of the elitist, group-think, pro-choice (pro abortion?) lunatics. Mission accomplished! Who's really laughing now?

So, let me get this straight. It's NOT ok to show an ad like this (inappropriate message?!) but it's okay for young women to sit through ad after ad of women stripping to their skivvies to sell beer, nacho chips and GoDaddy website space? WTH? Values check anyone?

I am pro-choice and am not at all a group-think elitist. I am pro-choice as a life-calling from my gut, heart and soul feelings. That said, I do not like the nearly naked women GoDaddy ads either. But anti-abortion activists and others (including some pro-choice ones!) were completely missing the point on this issue. We raised a fuss over the Focus on the Family Tim Tebow ad because CBS refused to air previously submitted ads by the likes of the United Church of Christ and ... yes ... even PETA (that one I will refrain comment on). CBS should have also chosen to air an ad by, for example, the United Church of Christ or Planned Parenthood to set the tone of an even playing field of public service advocacy which is supposed to happen on the airwaves, but does not anymore. That also said, I am also uncomfortable with how Focus on the Family's financial status of being "in the red," spent the $$$$$$ they did on any advertisement. It is no secret at all that many who are anti-abortion always seem to be money machines at the ready, no matter their financial status, and will spend $$$$$ at free will to ensure that no barrier at all stops these and other misleading ads from getting on the airwaves. I am concerned now that an impressionable pregnant woman, who is in at-risk health, will feel after seeing that ad that she must give birth even if she risks dying because she values the life's worthiness of her unborn child to be of more value than her own. That is a very wrong message to send no matter any opinion.

Indeed. The controversy was always about the decision CBS was making to air a commercial from Focus on the Family, by which the network was breaking its own policy and history of not airing such ads. It's that problem that occurs when a few people with a lot of money decide what's normal. That's the definition of elitism, for the record.

I'm going to speculate that Focus on the Family's purpose wasn't to make pro-choice folks seem hysterical. Instead, there goal is to make "family" and "health" synonymous with pro-life and other right wing social values. It's also to direct people to the website. As I've understood it, that's how Focus on the Family works. They present themselves as an unbiased source of information about family health. A parent might contact them hoping for insight into how to handle a son's ADD, for example, and then over time be drawn into Focus on the Family's right leaning social politics in a fairly aggressive way. This ad seems indicative of the way the organization is misleading and unhelpful to families.

As I mentioned earlier, mission accomplished! 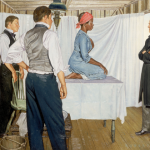