This is a Huge Week for Marriage Equality in the South

A proud Florida couple at a 2008 protest against Amendment 2, which rewrote the state Constitution to prohibit same-sex marriage. Photo by Danny Hammontree (Creative Commons).

This past year was a monumental one for marriage equality in the U.S.: a whopping 19 states granted LGBT citizens the right to marry. In the first week of 2015, the country has continued this forward stride across the South, where many skeptics thought marriage equality would never become a reality. Nationwide, support for same-sex marriage has ticked upward significantly over the past 10 years and, as of January last year, public support for-and-against same-sex marriage across the South was evenly split.

This week, marriage equality is facing crucial moments in four Southern states. On January 6, Florida’s ban on same-sex marriage ended—happy couples packed county courthouses in cities like Miami. Now, in what promises to be one of the biggest days for marriage equality proponents yet, the 5th Circuit Court of Appeals will convene on Friday, January 9, to hear cases from Texas, Louisiana, and Mississippi about whether their same-sex marriage bans are unconstitutional.

Here’s what you need to know about the important decision. 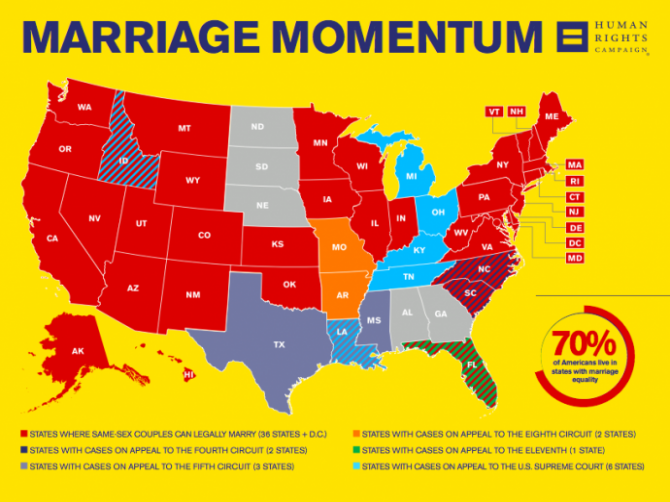 A map from the HRC shows that Southern states are hold-outs in the push to legalize same-sex marriage.

Texas: In 2005, Texan voters approved Proposition 2, which amended the state constitution to define marriage as a union between a man and a woman. The ruling has been challenged numerous times and came to a head in 2013 when two same-sex couples filed a federal lawsuit, one couple seeking the right to marry and the other seeking to have their out-of-state marriage recognized. In February 2014, the case went before Judge Orlando Garcia, who ruled that the state’s ban on same-sex marriage unconstitutional. Before same-sex couples across Texas could celebrate, however, Garcia enacted a stay on the ruling, pending appeal. Since then, the Texas LGBT community has worked to keep the issue in the spotlight through PSAs, like one starring a Fort Worth police officer who wants to marry his partner. Daniel McNeel Lane Jr., one of the attorneys facing down the 5th Circuit Court tomorrow, even went so far as to predict that marriage equality in Texas will become a reality before Easter.

Mississippi: A same-sex marriage ban has been in place since the passage of Amendment 1 in 2004. The most recent challenge to the ban occurred in October 2014, and it happened to mirror the events in Texas: Two same-sex couples—one seeking the freedom to marry, the other seeking recognition of their out-of-state marriage—filed suit along with the Campaign for Southern Equality. In November 2014, Judge Carlton Reeves ruled the ban unconstitutional but placed a hold on the ruling so the state could appeal. LGBT Mississippians have a strong advocate on their side, however: the lead attorney for the case is Roberta Kaplan, who brought down the Defense of Marriage Act in United States v. Windsor, a ruling which has since resulted in more than 20 cases which ruled in favor of same-sex couples.

Louisiana: A voter-approved amendment in 2004 prohibited same-sex couples in Louisiana from marriage or legal recognition of out-of-state marriages. One same-sex couple married in Iowa filed a suit in July 2013, which was eventually consolidated with other cases involving same-sex couples and helmed by Forum for Equality Louisiana. The suit was presented before Judge Martin Feldman who, in a surprising turn of events, upheld the state’s marriage ban—the first such ruling since United States v. Windsor. The plaintiffs have since filed an appeal with the 5th Circuit Court, with Lambda Legal now joining the case on their behalf. Things continue to look up for Louisiana’s LGBT community since three weeks after Feldman’s ruling, another Louisiana judge deemed the ban unconstitutional in relation to a same-sex adoption case.

As a Floridian by birth, I am the first to complain about my state but also the first to come to its defense when the state as a whole is attacked for the actions of a regressive few. Still, I thought it would be at least another decade before marriage equality became a reality in Florida. When the first legal same-sex marriages were performed in Florida this week, it was a monumental and uplifting day. I’m hopeful that tomorrow, the people of Texas, Louisiana, and Mississippi will be able to share in our joy.

Related Reading: Meet the Lesbian Couple Married Across the Street from the Westboro Baptist Church.

Ariana Vives is the new media intern at Bitch.

It's almost hard to believe that the states have reached 70%. While being really happy about the achivements of marriage equality, I guess there is still much to be done. Wish things would change here in Korea too.