The following was apparently an ad that NBC refused to show during the Super Bowl. It is a commercial featuring an ultra sound of an unborn baby–which all wraps up into an image of Obama. The basic message being: if Obama’s mother had aborted him because it was going to be “hard” to raise him, the U.S. never would have achieved the historic election of a black man.”

Although I seriously doubt that the people who created this video meant the racial politics of it to exist much beyond “First African American president! Hooray!” it is still interesting to me to think about what racial message this clip is really sending.

A single white mother controlling whether or not the entire black community will be able to celebrate a historic moment?

Hmmm. What does that say about single black motherhood that it took a white woman to get us our first black president?

And what does it say about ‘fertility issues’ in general that even when we’re talking about African American children, it’s *white women* whose choices are put under the microscope and interrogated–more specifically, it’s white women whose choices are *valued* (obviously not respected, but very clearly valued)?

Honestly, what-if arguments are the worst pro-life arguments out there. Two can play that game: What if Hilter's mother aborted him? What a glorious world we'd live in!

I really, really don't like the racial undertones to this message. I think it would be very possible for our country to have a black president without Obama. The point the author makes with the idea the ad presents that only a white woman could produce America's first black president is absurd.

Also, the ad is inaccurate. Abortion was illegal when Obama was born. It didn't become legal in Hawaii until 1970. I doubt Ann Dunham would have gotten an illegal abortion on a fetus she wanted.

I also think that this ad is derogatory towards single mothers. It says that all single mothers don't want their fetuses and abort because it will be "hard." Obama's mother was <i>married</i> at the time of his birth, and she <i>wanted</i> him. Why on God's green earth would a mother abort her fetus that she wanted? When she got pregnant and he was born, she didn't know that she would eventually become a single mother. She didn't know it would be "difficult" to raise him. She also remarried for Pete's sake! She had her parents' support! He lived with his maternal grandparents during high school! The mind, it boggles.

These pro-life idiots will do anything to push their anti-abortion and anti-Obama agenda. Thank God they rejected this ad for the Superbowl, now all they'll be do is whining that they're being treated unfairly. Well don't be a fucking idiot and maybe then you'll be treated fairly!

This is an age-old argument pro-lifers have used for decades...what if Beethoven had been aborted? MLK? FDR? etc. We've heard this all before - they just inserted a new name into an old argument. I'm glad the ad wasn't run, but the racial argument above is quite a reach and there doesn't seem to be any evidence of a racial intention. Lets fight anti-abortionists on the arguments, not try to paint them as bigots just because; then our argument starts to lose credibility. I think black women and white women need to stand united - don't argue nonexistent intentions that could serve to divide.

I agree. I wouldn't qualify someone as a racist and a bigot just because they take a pro-life stance, and insert Obama's name into an age old argument of anti-abortion activists. The Church is, of course, anti-abortion, and has serious issues with women's rights, but I've never known American Catholics to be racist. I grew up with a Catholic family, and have many close Catholic friends. I like to keep an open dialogue with them, rather than calling them "idiots" or accusing them of racism. That's what keeps us divided and makes pro-choice Americans look bad.

This ad, as well as many other "pro-life" arguments, revolves around a direct connection between fetus and adulthood. In other words, this fetus was set to be president from conception, when it is equally possible and more probable that innumerable other stimuli and choices created the possibility of Obama as President. Was it also determined in-utero that I would have taken a shower just now, or that I'm feeling hungry for a corndog?

I think the whole argument stands on a fallacy of determinism, which shouldn't surprise me coming from a point of view such as Catholicism.

I see the racial twists on this as well, and am struck by them, but this glaring hole is what reached out and knocked me in the face.

....that if Hitler's mother had an abortion, like was suggested, history would be less one psychopath dictator who tried to rule the world! (puts things in perspective doesn't it?)

I wonder what their response to that will be?

If you're looking for existential head-scratchers, I'll go one better. If the Supreme Court justices who decided Roe v. Wade were aborted...

Obviously their point is intended to be emotional, not logical. They aren't trying to win over any logical thinkers, or frankly, any intelligent people. The fact that they have no problem trampling all over minority and women's rights issues to make their emotional point is what's so scary.

I know that SOME anti-choicers (because I've seen them do it before) are using the fact that it wasn't aired during the Super Bowl to complain about the supposedly "liberal" media. Never mind the fact that the Super Bowl NEVER takes advocacy ads, including those from "left-wing" organizations like PETA...

It doesn't shock me that the anti-choice movement would use this cruel dishonesty to rile up support... they always do... but it still disturbs me.

Relevant: To Call Trump an “Outsider” Is to Dodge the Real Point 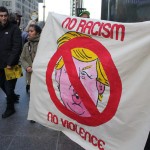 by s.e. smith
He is a raging white supremacist. That's not outside American politics, it's right at the heart of the status quo.