In "Spy," Melissa McCarthy Screws With Your Expectations—And Gets the Last Laugh | Bitch Media

In “Spy,” Melissa McCarthy Screws With Your Expectations—And Gets the Last Laugh 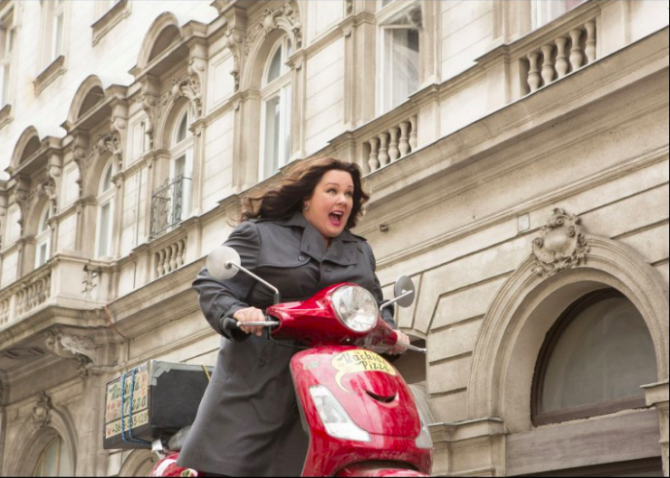 Spy movies playing on the James Bond trope have been boring for years. Even comedies like Archer, which satirizes the genre, are pretty played out at this point. That’s part of the reason why I had low expectations going into Spy, director Paul Feig’s summer spy spoof starring Melissa McCarthy.

The trailer for Spy gives the impression that the film is 90 minutes of Paul Blart: Mall Cop-style fat jokes, with McCarthy cast as a bumbling spy. To my great relief, this was not the way the film actually turned out. With a great cast and just the right amount of over-the-top one-liners, Spy is a smart and uplifting film—one that’s finally worthy of Melissa McCarthy’s comedic genius, after a string of recent films have not done her justice.

The premise of Spy shows what the movie gets right. Melissa McCarthy plays Susan Cooper, a desk-bound CIA agent who has spent her whole career being the unappreciated brains behind glamorous spy Bradley Fine (Jude Law). But when the macho team of top spies is compromised by an international arms dealer, the agency needs to find an agent who no one will notice, a spy who can be “invisible.” Agent Cooper doesn’t hesitate—she jumps in to ask for the assignment, knowing that as a large-bodied, middle-aged woman, she’ll likely be overlooked by waiters and international arms dealers alike. Her reasoning clearly speaks to how our culture often ignores and disregards larger and older women. But the film doesn’t task Cooper with “proving us wrong”—right out of the gate, she’s competent and capable.

As CIA chief Elaine Crocker (an excellent Allison Janney, who you can’t help but think of as CJ Cregg) quickly points out, Susan graduated at the top of her class during CIA training. But during her 10 years at the agency, her mentor Agent Fine has insisted that her “tame demeanor” makes her a better fit for office work—supporting him in the field rather than getting to flex her own muscles. Despite her deftness at disabling power grids and ordering drone strikes, Susan gets little credit for her work and seems to go largely unnoticed.  “He sniped you,” says Crocker, bluntly. “All the men used to do that before I got here.” She hands Susan a secret identity (a divorced mom who, in Susan’s words, “looks like someone’s homophobic aunt”) and tells her to get out in the field. 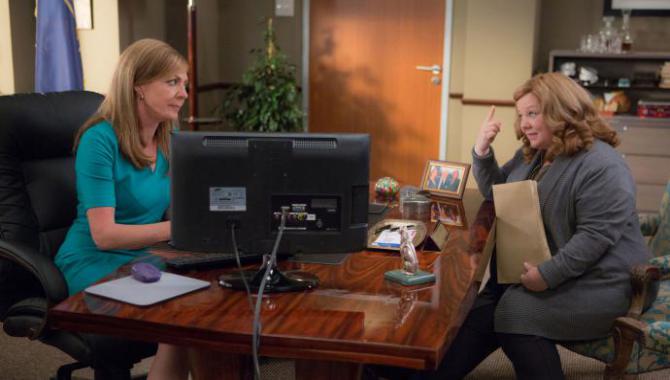 As CIA top brass, Allison Janney’s character gets to call the shots—and call out chauvinist spies.

Many of Susan’s greatest moments come not from high kicks, car chases, or fancy gadgets (though there are plenty of those in the film), but from tapping into her intelligence and resourcefulness. She MacGyvers a piece of wood to drive an unmanned car into a tree, she speaks enough French to ask a local resident for help, she talks her way out of a couple near-death situations. Susan’s not the type of spy who has to be leaping and shooting in order to be successful—but in the rare occasion when that’s actually called for, she can cling to a helicopter like a champ. In all these situations, Susan has a leg up because her opponents underestimate her. While the male spies in the film (including Jason Statham as a parody of himself) talk a big game, the way people condescendingly judge Susan’s abilities wind up only helping her in the end.

Not only does this movie foreground a woman busting out of her assigned role and kicking ass, it also highlights an awesome female friendship which, in my opinion, steals the show. Nancy Artingstall (Miranda Hart or “Longshanks” for the Call the Midwife fans) is Susan’s best buddy from the CIA basement. She’s a self-identified “non-physically resourceful” person who has read all of the Hunger Games books. Naturally, she is great. In most films, Nancy would be a character who drops in, delivers a couple lines to help move the plot along, and is never seen from again. But as Spy careens along, the friendship between Susan and Nancy actually central to the story. 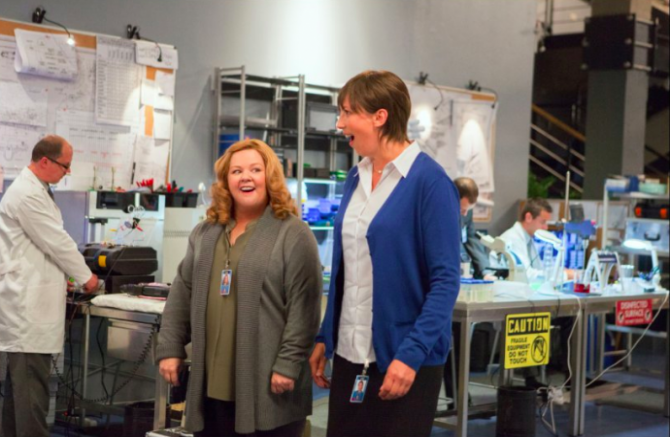 Melissa McCarthy and Miranda Hart check out all the cool spy gear. “Alrrright!”

They’re nerdy best friends who are suddenly in the midst of a world of Baccarat and high-speed chases. And their banter is impeccable. In a genre that typically lets dudes get the best lines, both McCarthy and Hart get many excellent one-liners and rampant opportunities to make the best of their comedic chops. Rose Byrne also brings her comedic A-game as an arms dealer who dresses “like a slutty dolphin trainer.” She’s rich, vain, and terrible at remembering people’s names. Byrne brings a lot to the role and gives a warmth and pop to a character that would likely otherwise fall flat.

There are a lot of talented funny women in Spy, but this is still definitely a wild action romp.  Spy veers in many scenes toward the fart joke crowd and amid the celebration of female friendship, there’s lots of gross-out humor that revolves around vomiting and butt-grabbing. There’s not one but two poop-in-your-face-while-69ing jokes. There are also a couple creepy jokes that don’t land well at all: One of the male agents, Aldo (Peter Serafinowicz) plays up the stereotype of the amorous Italian in a way perhaps designed to be endearing (Susan at one point compares him to Pepé Le Pew) but comes off as douchey and disrespectful. At one point, he mutters to himself, “Susan Cooper, one day, I will fuck you.” Barf.

Flaws and eye-rolling fart jokes aside, it’s great to see a film whose script rises to meet Melissa McCarty, Miranda Hart, Allison Janney, and Rose Byrne at their comedic level. Spy is a welcome change-up to a tired genre.

Rebecca Olson is a writer and poet living in Portland, Oregon. She has an MFA in creative writing from Oregon State University and lives with her cat, Bonanza Jellybean.