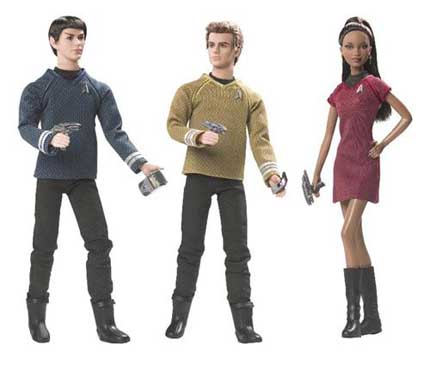 There are a gadzillion reasons why I'm not a fan of Barbie dolls, and they all apply to the new Lt. Uhura doll, part of Mattel's upcoming Barbie Doll line being released in conjunction with J.J. Abrams' new Star Trek film.  But there's also a hilariously awesome reason to love these dolls: fanboys are freaking out that they make Star Trek too girlie.

According to a CBS Products news release, the Mattel Star Trek Barbie Dolls will feature Captain Kirk, Mr. Spock, and Lt. Uhura. These dolls are a follow-up to a set of Star Trek Barbie and Ken dolls released in the 1990s to celebrate the 30th anniversary of the show, and their $43 price point is set more for collectors than kids.  Yet Mattel claims that the dolls are appropriate for children ages 6 and up, so these are still toys.  And that is what so many fanboys are irked about this week: they can't deal with the fact that girls and boys might play sci-fi dress-up with Trek characters (especially those who are psyched about J.J. Abram's new action-packed, dudely approach to the Trek franchise).

The response? Disbelief. Astonishment. Worry.  Concern over the effeminacy of Kirk and Spock dolls.  Only Ain't It Cool News can find a geek boy upside to this: these dolls might turn more little girls into hot geek babes.

So I'm no fan of Barbie, but I'm quite delighted with the looming specter of girls playing with Star Trek dolls, and perhaps imagining themselves in outer space.

Yeah - I only wish the characters in the original <i>Star Trek</i> (and presumably the upcoming film) were a bit less like sexist stereotypes. Especially coming after the previous <i>Trek</i> film, <i>Nemesis</i>, where once again Deanna Troi had to get psychically raped in order to further what little plot there was.

I can't help wondering if they'll sell - will fanboys really be willing to shell out on Barbie dolls? And will parents who are used to buying the usual girly girl Barbies even consider picking these up?

Your average fanboy? Maybe not. But the collectors will have a day of it, and there'll probably be a lot of original Trek fans who'd buy these, either as playthings for their kids/grandkids, or as collectibles. There's a <i>lot</i> of nostalgic love for TOS among the American baby boomer generation...and then there's the retro-kitsch crowd...

Thanks for bringing this up, Tammy--now I just have to finish blogging about how the Trek fanboys have again shown themselves to be major dweebs.

But let's give it the proper due as well. It touched on subjects that reflected important social issues in both the original series and the next generation. First interracial kiss on TV, racism in general, and that amazing episode in Next Gen where a gender neutral alien decides to identify as a particular gender and the punishment the society enforces as a result. First show to even begin to breach that topic in the mainstream. Hell even those silly singlets that women wore in Next Gen were worn by the men as well. The original series pilot had the female first officer taking charge after the captain was captured, the network forced Roddenberry to make the first officer a man afterwards, but that was unheard of for the 60s television programming. Any drawbacks those shows had were more a reflection of the industry than the higher ideas driving the creativity. Let's not let a crappy milking of a franchise diminish the positive impact that series had. The movies have sucked since First Contact anyway...

I've always loved Science fiction. I watched TOS reruns with my dad as a small child and went nuts over Star Wars as a 4 year old when it came out, read scifi books, dreamed of being like Princess Leia (haha). It always pissed me off that there was such a lack of girly toys for these show/movies growing up. Oh... and the one doll I did get and I took meticulous care of (most dolls ended up naked in 10 minutes) - the Princess Leia doll with the buns... it got stolen 6 months after I got it.

Fast forward 30 years. My, now 9 year old daughter feels this same frustration with the shows she loves. I had to go online to find her Padme dolls and action figures... most of them look almost manly (lol Have they never seen Natalie Portman?).

She loves Avatar: The Last Airbender. Katara is her favorite character. Katara is a MAIN character. Guess what? There are NO Katara toys. WTF? There aren't any female Avatar toys. What's with that? Seriously... I know of lots of girl avatar fans.

Those geek fan boys can stuff it. The only problem I have with these Star Trek barbies is the price. 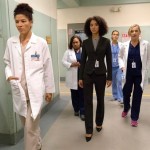