State of Women in Media: We May Never Run the Press | Bitch Media

State of Women in Media: We May Never Run the Press

In the past several years, women have used various platforms and organizations to draw attention to the gender divide that persists in media. We’ve only made a little progress.

In the new annual report from the Women’s Media Center released last week on the status of women in American media, there is evidence of slow progress for women in film, print, television and radio. Aside from the lack of opinion writers, the overall tally of women staffers continued to hover at 36 percent—a figure largely unchanged since 1999.

Women’s literary organization VIDA has been conducting byline counts for women since 2009 and noted that a couple of literary magazines and book reviewing publications like The Paris Review have made significant progress publishing more women:

Turnarounds like the Paris Review’s make it clear that with the right editorial effort, putting more sustainable gender practices into action isn’t too difficult for these magazines at the top of the major market heap. Pamela Paul, editor of the New York Times Book Review, also demonstrates what good can come when top tier literary outlets recognize the importance of presenting a balanced mix of voices by significantly increasing the number of female reviewers in the NYTBR in 2013. So the mountains begin to move.

But VIDA and other organizations also report that those mountains have not moved very much. Things are perpetually dire for women who cover sports—just two women were on a “Heavy Hundred” list from Talkers magazine among 183 sports talk radio hosts. This is in spite of the fact that women are 45 percent of NFL fans and 33 percent of the NFL’s TV audience. Jennifer Weiner was the most notable writer to recently draw attention to the way women’s writing is ignored in places like the New York Times Book Review, though that disparity has changed since a woman took the helm as editor. Ethnic minorities have the same trouble as women. The study notes that there is a woeful underrepresentation of people of color in all media genres and in movie portrayals; Latinas and black women are still largely depicted along stereotypical lines. Most top-grossing and well-paid directors are still largely male. In a country where ethnic minorites are slated to be the majority in the U.S. between 2043 and 2050 and where women are more than half of the population, you have to wonder how it is possible that mass media continues to undervalue the contributions of women and people of color in telling America’s narrative. I wonder if the research, statistics, and anecdotal evidence that point to a news ecosystem that is utterly resistant to women is steeped in sexism or if it truly all about money? When I see things like this trumpeting a prosperous future for the news business while relying on the limited perspectives of old white guys, it seems myopic, repetitive and frankly, bad for business.

Melissa Harris-Perry, who has far more diversity on her show than other top shows, enjoys high ratings and a fan base that seems closer to representing a broader swath of people, for instance. Media Matters has recently written to networks to call for more women’s representation on TV on Sunday morning talk shows, too. In the new Women’s Media Center report, TV news producer Lisa Cox puts it bluntly: “Any news operation that does not see or comprehend the value and importance of diversity behind the scenes is fooling itself…if it thinks it can still responsibly and objectively cover the news and be an effective resource for the communities it’s charged with serving.” It’s hard to ignore the irony of a press that excludes a growing majority of its audience. When I became a newspaper reporter 14 years ago, I imagined that newsrooms were immune—or building up their immunity—to the sexist, racist, and gendered politics that they covered. The core principles of journalism that I love, after all, are about furthering democracy through the freedom of the press to circulate critical information. It is about comforting the afflicted and afflicting the comfortable. That there has been little progress for both women and people of color as the news business has scrambled for advertising dollars and while making sense of news in a digitally disrupted environment is disheartening.

But there are ways that women journalists and those that love them can make a dent in some of these dismal numbers. Let’s start with the readers, TV-watchers, film buffs, and others who note an absence of women covering stories or even represented in stories. You can voice your disappointment in comments or in emails to editors, producers and companies. All media runs on the currency of your attention and threats to divert it elsewhere can help women start to make swifter progress.

Persistence is one solution and it’s an important one.  Sara Morrison, writing for the Columbia Journalism Review, prompts women to pitch “like Geena Davis’ sister in A League of Their Own. And if a publication turns you down, pitch something else.” Another idea that works is to keep supporting the work that you love, whether it’s Melissa Harris-Perry or Bitch or other outlets that offer the kind of representation of women you’d like to see in the world. Eventually, we will get those mountains to move a little more—or at least we can keep leaning on them until they do.

Joshunda Sanders is a writer, blogger, and journalist on culture and media. She is writing a book about race and media that is scheduled for publication in 2015. 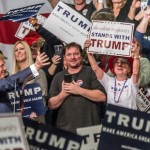 by Sarah Mirk
It's votes from white people that carried him into office. We can't ignore that fact.