A New Report Reveals the Realities of Street Harassment 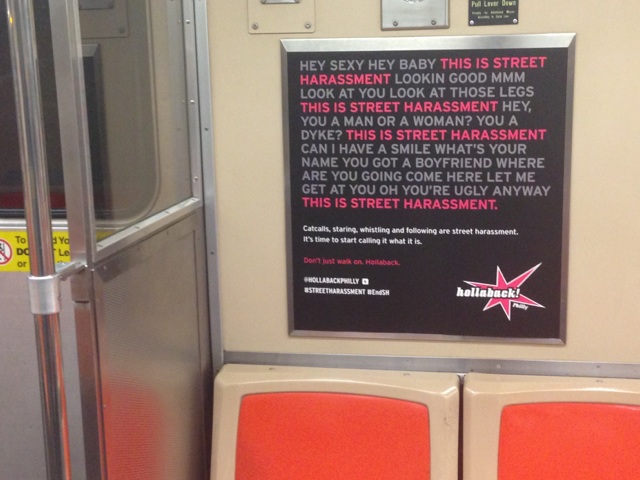 Today, organization Stop Street Harassment took a big step in raising awareness about the realities of street harassment by releasing a major study of the nature and impact of street harassment in the United States. Its results clearly show that while the vast spread of street harassment can make it seem like just part of the landscape of living, street harassment’s disturbing daily acts affect the majority of Americans and have powerful negative repercussions on who feels safe in public space. Street harassment is not ubiquitous, instead it disproportionately impacts women, low-income people, LGBT people, and people of color.

The report provides a big picture of harassment that many people experience on their own. Many people know “street harassment” as catcalling, but the report, “Unsafe and Harassed in Public Spaces,” offers a more accurate description: any unwanted interactions in public spaces between strangers that are motivated by a person’s actual or perceived gender, sexual orientation, or gender expression and make the harassee feel annoyed, angry, humiliated, or scared. That means catcalling, but also groping, following someone, whispering homophobic slurs, and sexual assault. The report surveyed 2,000 Americans, roughly split between women and men, ages 18 and up. They also gleaned information from 10 focus groups held across the country.

Here’s the big news from the report: 65 percent of American women report experiencing some type of street harassment in their lifetimes, including 41 percent who are subjected to some kind of physical harassment, like being touched or followed. A significant number of men—25 percent—have also experienced street harassment. In many ways, people of color, lower-income people, and LGBT people are disproportionately impacted by street harassment. Street harassment begins at a young age and has a big impact on peoples’ lives: the majority of people who have been harassed have worried that the incidents would escalate into something worse. One reason why more women find street harassment upsetting than men is that many women fear small comments and catcalls could escalating to sexual assault or rape. 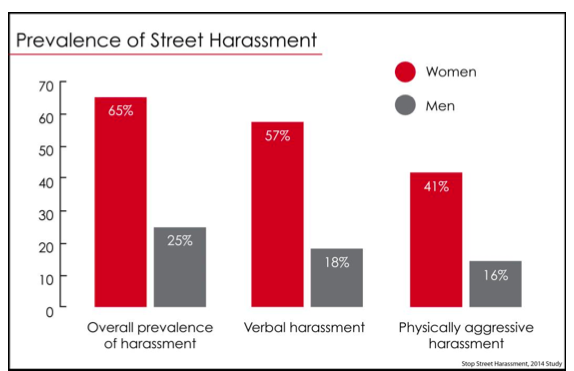 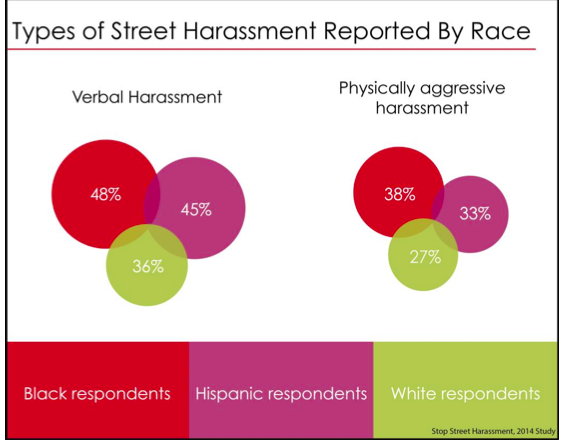 All graphics are from the “Unsafe and Harassed in Public Spaces” report.

When people dismiss complaints about catcalling, they miss the point. As Suzy X noted after attending the first-ever intentional conference on street harassment last summer, “It’s not as simple as men harassing women; it’s one’s special way to remind you who the bosses are in this world—and those bosses exist across gender, race and class lines.”

Harassment takes a big emotional toll. Nasty comments and being made to feel unsafe clearly impacts who feels welcome using public space. According to the new study, almost half of women and a third of men who experience harassment have changed their lives to try and avoid any hassling, including making the decision to not walk alone or to even move neighborhoods. “Street harassment keeps many harassed people from feeling safe in public spaces. It can dictate where they go, when, with whom, and how they dress,” says the report.

Some cities have recognized how their residents do not all feel comfortable using public facilities and have worked with street harassment activists to cut down on abuse. The report notes the efforts of Boston and Washington DC’s public transit agencies have made to curb harassment: the DC transit agency worked with anti-street harassment groups for the past two years to train all 4,000 of its employees to recognize and deal with street harassment and have developed a system for riders to report harassment online. In a statement about the Boston program this spring, Cara Presley-Kimball, president of the Violence Recovery program at Fenway Health, noted that the city’s transit campaign is specifically addresses harassment and violence that is targeted at LGBT people. 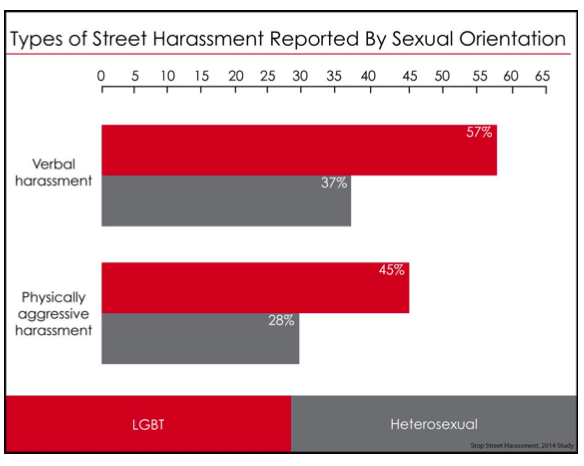 The new report quotes California State University, Long Beach professor Shira Tarrant on why it’s overwhelmingly men harass who people in public. Part of the answer, says Tarrant, is that boys are taught that masculinity means exerting power over other people. Telling a stranger that she looks sexy is a way to control her attention and her physical space. Tarrant writes, “Our culture sends chronic messages to boys and men that they are entitled to access other people’s bodies, invade personal space, and even to violate our most intimate realms with impunity or lack of awareness if that other person is perceived to be less powerful.”

It's sad how true this is. I have experienced this for as long as i can remember; on one hand I try to brush it off but on the other the discomfort and fear that comes from street harassment is all too real. Recently my sister and i were in Kauai and wanted to take a walk on the beach at night. It was so beautiful that we decided to take the chance of putting ourself at risk. (How unfortunate that we felt we were making a bad decision?) before we even reached the beach a car full of men yelled at us, opened the car door and pulled a u turn toward us. We ran into the shadows and were shaking; i instantly felt a sense of impending doom and wanted to cry. We found refuge in approaching two homeless men and asking if we could sit with them for a few minutes. When the men got out of the car and walked by, they were laughing and looking at us; Exuding a pride in the fear they had instilled in us. To them this was passing amusement. They got to feel masculinity and power over women pumping through their veins. I felt like an idiot for putting my sister and I in danger. All we had wanted was to see the beautiful ocean reflecting moonlight, all we wanted was to soak in the awe of the earth at night. These are spaces all humans should feel comfortable to enjoy, but instead we were made to feel shameful for trying.

can we expand the street harassment definition to include racially motivated comments that do not have a gender or sexuality component? a white person yelling racial epithets at a man of color is harassing that man. and it can be, I'd think, as scary to that man as gender and sexuality based harassment is.

I completely agree with you.

Hi! I'm the author of the study. Absolutely racially-motivated harassment as well as harassment motivated by identities like class, disability, and nation of origin are big problems and impact many people --- both women and men. There is no doubt they are harassment.

Stop Street Harassment's work has always specifically focused on harassment motivated by gender, sexual orientation and gender expression --- but looks at how all of those other identities intersect with gender/so/ge. This is in large part because when we started in 2008, very few people were addressing this type of harassment and even today, many people do not see this even as harassment but as a compliment or just a normal part of life (especially if you're female). I haven't encountered anyone would classify harassment based on race as a compliment or normal so I do see them as different for that reason (among others, like men who are harassed based on race are rarely going to fear rape while women harassed by men period may) and worthy of having a study that is separate from say, racially-motivated harassment.

It would be interesting to have a study that looks at all types of harassment however. Unless we get a huge grant, it won't be us though! (It took us nearly 2 years to fundraise to even do this 2000 person survey -- national data is expensive to gather). But maybe this study can inspire a larger study.

Thanks for your question and observation. If you have other questions, feel free to contact me directly, hkearl @ stopstreetharassment.org. -holly

thanks for responding! to be clear, I have no issue with your report or the parameters you chose. and I think your point about "compliments" is very important. I just don't see non-sexual harrassment addressed anywhere really, in the context of people feeling safe on the streets. many straight cismen have to walk through hostile environments. obviously they aren't being targeted for their gender identity or sexuality, but I do think overt racist harrassment, which isn't necessarily seen as threatening by the perpetrators, (making "Asian eyes", for example is often seen by white folks as "just joking") is under addressed as a social phenomenon when it isn't combined with physical violence.

I am truly shocked that ONLY 65% of women surveyed report being harassed.
This means, there are women in this country - in this world, who have NEVER experienced street harassment. I cannot imagine that. Sadly, I just don't believe that.
I must get all the extra nasty comments? Starting from age 9.

Me too! I'm really dumbfounded that 35% of women say they've never been street harassed. Who are these un-harassed women and how do you get to be one? I hardly know anyone who hasn't been harassed. It's a near daily occurrence where I live (and in many places I've lived); I can't even remember the first time it happened to me. As a child I saw it happen to adult women regularly, including in lots of movies! - as I recall. By the time I was 18, I felt like a seasoned pro fending off the aggressive sexual verbal and physical advances and comments from strangers, not just to my psyche and my body but to my friends' as well. (Not just from strangers either. From boys I knew at school. )

Came across this "study" by accident and I nearly fell of my chair.

The author may be unaware of the fact that every other study ever conducted anywhere in the world, concludes that men make up the overwhelming majority of victims of verbal and physical abuse on the streets. They are also 4 out of five victims of violent assault.

Good luck with your next "study."

Svetlana, I think you are missing the definition of street harassment. It is defined at the beginning of the study:

"What is street harassment?

“Street harassment” describes unwanted interactions in public spaces between strangers that are
motivated by a person’s actual or perceived gender, sexual orientation, or gender expression and make
the harassee feel annoyed, angry, humiliated, or scared. Street harassment can take place on the streets,
in stores, on public transportation, in parks, and at beaches. It ranges from verbal harassment to flashing,
following, groping, and rape. It differs from issues like sexual harassment in school and the workplace or
dating or domestic violence because it happens between strangers in a public place, which at present
means there is less legal recourse. "

I think you are probably confusing it with non-gender based harassment.