Running on breakfast taco fumes and contraband waterbottles (seriously, it’s water, let me bring it into your bar), Bitch caught several more excellent female-fronted bands as SXSW Music in Austin wound down. Our second-to-last day of coverage found us unintentionally chasing bands with lead singers rocking bouffants, and we also have a big ol’ Grammy prediction about one of the day’s acts. Don’t let her face in this picture fool you–the lead singer of Madison, Wisc. indie-pop band PHOX was gracious for her entire set (and stylish as all get-out). The band’s music sparkles in a homemade sort of way; vocals sit largely in higher registers and glass-jar percussion are typical, as are quieter songs featuring little more than vocals and one guitar or piano. It’s lovely music: sad, effervescent, and instantly relatable. I might be getting loopy in my end-of-SXSW sleep deprivation, but it is a true fact that I watched the sunlight stream in from 6th street onto the stage while they played and thought, “That could just as easily be beaming FROM this band as ONTO this band.” They’ll be key on my summer mix CDs, and are one to watch in the coming year. Folk-rocker Erin McKeown is only getting introduced as a folk-rocker because folk music is notoriously inclusive. I could just have easily written “alt-rock-electro-jazz-folk-poet Erin McKeown,” and still not have quite covered all the bases. McKeown’s persona preceded her show; I know her as an activist, an ethnomusicologist, and a friend of Rachel Maddow’s. Now I know her as a stellar performer, a prodigiously talented creator (writer, producer, teacher, musician…), and a seriously kind human being. One of my favorite “first time seeing” artists this year! Lucky for us, she’s got a big back catalogue of music and writing to tide us over until whatever the next of her myriad projects is released. SXSW is a notoriously arduous place to be a musician. Bands shuttle from venue to venue, sometimes playing three or four shows a day, and often not getting to soundcheck, much less rehearse, before performing. Austin is in the middle of Texas, which is in the middle of the country, which takes forever to drive to no matter where you’re coming from, no one is getting any sleep, crowds are usually drunk and often there to see the NEXT band on the schedule, not you, and the city-wide explosion of spring bugs tends to coincide perfectly with SXSW every year. All of this is to say that bands have a lot of reason to be cranky, or not chatty, or simply exhausted at any given show. So you’ll understand when I say that London singer-songwriter Lianne La Havas was so cheerful and charismatic onstage, I forgot I was in the middle of a packed garage warehouse at an urban music festival entirely. Her songs aren’t necessarily cheerful; in fact, they’re often gut-wrenchingly sad. But you could see her smile from space when she bantered with the crowd. She’s only 23, and has the same uncanny ability as Adele to write world-weary songs about love’s lessons learned, sung in a voice 50 years wiser than the face singing them. If she’s this good a soul singer NOW, La Havas at 50 is going to be her generation’s Etta James. Heads up, 2014 Grammys: Here’s your Best New Artist for SURE.

Read all of our awesome SXSW coverage!

Where are some kind words for Amanda Palmer???

While not female performers, Pentti Kurikka's Name Day deserve a shout out for diversity and pure joy of writing and performing music. The documentary made about the band, The Punk Syndrome, won the Global Audience Award, and the boys have been playing at the festival: 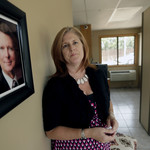 by Courtney Sheehan
The women behind the film discuss tackling a taboo topic onscreen with a feminist lens.