Tuesday kicked off SXSW Music, the world’s biggest urban music festival. Bitch is in town for the festival all week, covering bands we love and think you’ll love too. Read below the jump for highlights from our first of many 12+ hours days on the streets of Austin. Our first stop was into the historic Central Presbyterian Church, where Massachusettes quartet the Parkington Sisters quieted the imposing sanctuary space with their sweet, harmony-laden folk songs. Each of the sisters is a multi-instrumentalist, which makes for a dynamic show full of moving between strings, piano, percussion, and vocals, and means too that the group’s sound changes song to song. Look out first for the close, stirring harmonies the band layers into all of their music–with four singing members, there are more harmonies to be found!–which lend depth to songs that are otherwise light enough to float away. I didn’t even hear lyrics during this show, mesmerized as I was by the voices singing them, and the string arrangements pulling each song along. Look out for the Parkington Sisters’ first album, 2011’s Till Voices Wake Us, and keep en ear out for a new album this summer!

For Fans Of: Warpaint, Jesca Hoop, the Brunettes

From Massachusettes to England, we ran down the street to the UK showcase to catch a set by singer-songwriter Lucy Rose. Rose had less luck quieting a large crowd, but to be fair, hers was being supplied with alcohol, and the Parkington Sisters’ wasn’t. Still in the process of being discovered in the States (a process that last years’ signing with Columbia Records should expedite handily), Rose is a star in the latest sense of the word: She built her fan base from the ground up, with YouTube hits and self-released music that slowly made its way to British radio. The slow, earnest start to her career shows in her music, which feels unshakeable and quietly resilient, whether singing about heady road trips (“Bikes”) or being alone (“Middle of the Bed”). She’s exactly the singer you wish would show up at open mic nights and blow everyone else out of the water. Her voice isn’t showy, but it’s beautiful, and her lyrics are honest enough that on first listen you already get the sense she knows exactly who she is. A noisy bar is not the place to see her, but she would make perfect headphones music for warm, breezy days. Back at Central Pres, Gaby Moreno played the best set of the day. More than 2,500 bands play SXSW and yesterday I had 12 shows on my schedule over the course of 5 hours. I missed four of them because of Moreno. She sings soulful, bluesy songs in Spanish, occasionally adding horn sections, piano, and bossa nova rhythms to add mirth and even humor to the mix (“Nostalgia,” which she wrote about Woody Allen movies, has old-timey horns that sound like walking through a 1930s carnival). Thanks to her great music and effervescent personality, the performance was irresistible start to finish. She gave a small speech before she started, apologizing that the music she’d be playing was almost exclusively in Spanish (Moreno is from Guatemala, and her stunning recent album Postales is entirely in Spanish). The crowd loudly assured her we wouldn’t mind and with cheers, and agreed fervently when she said, “It’s about the music, anyway. I listen to French music all the time! Who knows what they’re saying, but I love it!” For Spanish speakers, Moreno’s lyrics are equally captivating, particularly her gorgeous ballad to Guatemala “Ave Que Emigra.” But You won’t even have to know what Moreno is saying to love her songs. She’ll take your breath away, and she’ll make you cancel your plans to listen. Our last and biggest show of the night was Canadian duo Tegan and Sara, decade-plus veterans of the music industry who are this year finding massive mainstream success with their dance-pop album Heartthrob. Their move away from the quiet singer-songwriter music that made them famous seems to have gone over well with fans, as they switched between acoustic guitars and electronic soundboards almost every song of their set and drew ecstatic response for all of it. The sisters, who are both gay and vocal about their sexualities, are also beloved for their stage banter, which made me laugh out loud, even standing by myself in a large group of bro-y dudes spilling beer on my feet. Any band fronted by two lesbians that can make me AND a bunch of bros dance like it’s the last chance we’ve got is a band I’m going to follow anywhere.

You forgot the Savages! I saw them yesterday at the Brooklyn Vegan show and they sounded amazing. Post-punk revitalized by four very talented ladies. Catch them March 15 11pm @ Club DeVille, March 16 at the Spin Party 3pm!

Thanks for the tip! I'm hoping to get to the Spin party this afternoon! 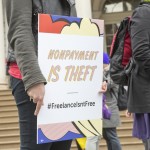 by Victoria Law
More people are working as freelancers in the growing gig economy. But they face a big challenge: Getting employers to actually pay in full and on time.