No Sleep, Only Rap: We Survived SXSW! | Bitch Media

No Sleep, Only Rap: We Survived SXSW!

After five days, 40 bands, and a combined 20 hours of sleep over the course of the week, we made it to the end of SXSW Music in Austin. Sprained toes and sleep deprivation be damned, we saw more bands that we want you to know about on our last day of coverage than any day prior. Read our Final Eight (it helps to think in capitals) highlights from SXSW 2013! Last year at SX, Minneapolis-based rapper and singer Dessa performed with Doomtree Collective, the hip-hop group that launched her career (and in which she is the only female rapper). This year all of her sets were solo, and audiences were treated to her excellent R&B singing alongside the thoughtful, often devastating raps she’s known for in Doomtree. Comparisons to fellow rapper/singer Lauryn Hill are sure to run rampant as Dessa’s solo work ascends (a record slated for release this year, her third solo, is sure to help), but they’re very different performers. Dessa’s songs are more direct, less polished, and consistently darker than most of Hill’s work. They won’t be made into singles terribly easily as a result, but they will surely make fans wherever they land. Here’s the video for “Alibi,” from 2010’s A Badly Broken Code. Brooklyn band Lucius is new enough that SXSW was probably the first time many audiences were hearing their bouncy, percussive pop songs performed live. The band is fronted by Jess Wolf and Holly Laesig, two Berklee School graduates who perform in identical clothes, hair and makeup, to match their perfectly synchronized singing style. To get an idea of how irresistible their sound (and style) is, check out the concert they recently performed from NPR Music’s office in Washington, DC.

Singer-songwriter Lisa Germano’s quiet, intimate set was the first time I’d ever seen her live. Her songs sound like conversations, so clear are her lyrics and so unadorned her delivery. Her decades-long career ensured that almost every person in the club watching her adored her palpably, which made her show even more of a reprieve from the hectic pace of the festival around us. Here’s the video for 2009’s “Puppet.” SXSW is full of music moments that feel magical. Singers come off the stage and sing in the crowds, beloved bands perform secret concerts in hotel rooms, or the woods, or under the Congress Street Bridge, surprise guests appear onstage (See Aoife O’Donovan, below) without warning and make performances even more special. Most of these moments, as I’ve experienced them, have been sweet. This year the performance I saw that was most imbued with SX magic was not sweet. It was powerful. And it came from 21-year-old rapper Angel Haze. She took the stage with no hype, no dimmed lights, no announcement. But she took it at 1,000 miles an hour, and she left it five or six songs later at the same speed. She was rapping the second she stepped into view, she was rapping when she walked off the stage and into the crowd, and she only stopped between songs to mention what a “fucking dream come true” it was to be performing for Austin. Her delivery is aggressive, but her raps are hopeful. I was struck at the beginning of her set by how the intensity of Haze’s voice seemed to contrast with her lyrics about reaching for goals and relying on yourself to achieve them, but setting the two at odds was not actually appropriate. Haze has survived sexual abuse, which she confronts head-on in her heart-stopping response to Eminem’s “Cleaning Out My Closet.” (TRIGGER WARNING: Contains violent, graphic descriptions of rape). Haze is a game-changer, and we’ll be hearing much, much more from her. I know bluegrass singer Aoife O’ Donovan as the lead singer of Crooked Still and the best guest appearance on the excellent Goat Rodeo Sessions album Yo-Yo Ma put out with friends in 2011. I’m not used to seeing her by herself, which is why it took her being introduced as a special guest by Jesca Hoop for me to recognize her. O’ Donovan is an extraordinary harmonizer, as is often the case for singers trained in Celtic, folk, and/or bluegrass singing, and her voice has been the secret ingredient to every song she’s been featured in. (Listen to “Here and Heaven” from Goat Rodeo Sessions here.) She ran from Jesca’s set to her own solo set across the street, and made a fan out of me all over again.

There were several acts we caught a few songs of each, but missed getting photos of. First up were the British band The Staves, comprised of sisters Emily, Jessica and Camilla Stavely-Taylor,  who sing gorgeous three-part harmonies. They were an auditory vacaction in the middle of my last day, and I look forward to listening to their debut album, last year’s Dead & Born & Grown. Here’s the video for “Facing West.”

Paloma Faith
Next up was another British import, singer Paloma Faith. Her voice is a brassier version of Amy Winehouse’s, which made it hard to mic correctly and resulted in less-than-stellar sound while she sang. But she was cocky, funny, and charming in her banter, and her delivery was earnest. Here is the video for her latest single, “Just Be.” (Imagine the “shhhh” in the chorus being directed at loud patrons of the bar where she was playing, complete with a snarl on her face, and you’ll get an idea of her energy.)

We finished with beloved New Orleans bounce artist Big Freedia, who will make you dance so hard you’ll need to stretch before and afterward. (Seriously. I’ve pulled thigh muscles attempting to bounce. It’s not for the novice.) This is the last show I saw this year, and stumbling home carrying my shoes and unable to feel my legs because I shook them too hard felt like exactly the right way to end the week. Here’s her video for “Y’all Get Back Now.” See you next year, SX!

Read all of our coverage of great female artists at SXSW!

Relevant: BitchTapes: Fall For You 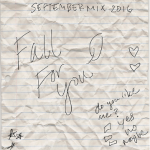 by Maggie Owsley
Autumn feels like a new, warm start to something better to come.