In my last post I wrote about a few of the problems I’ve observed regarding the way anti-street harassment blogs and the media construct “perpetrators” of harassment. In this post I want to build on those thoughts by bringing in their construction of “victims” as well. Collective Action for Safe Spaces asked in the comments of my first post of this series for an analysis of the roles race and ethnicity, socioeconomic status, and sexual identity play in street harassment, and I think this is a good place to dig into that more deeply. However, this will be a multi-part post because these issues require too much unpacking for just one entry.

In the mid-90s, American teenybopper television saw the emergence of a pop culture heroine whose cultural significance has since been analyzed to death: Buffy Summers. The oft-repeated genius of Joss Whedon’s character creation is that he took an omnipresent archetype of female victimhood and turned it on its head. The girl who was seen as the “perfect victim” was actually the one who was best equipped (albeit by some mystical intervention) to do away with the “bad guys.” For all the celebration of Buffy’s feminist-y ways, the ubiquitous victim archetype for girls and women remained steadfast, in the show and in real life. While the archetype of who could be a ‘hero’ took on a new(ish) feminine form—to be fair, actresses like Sigourney Weaver and Linda Hamilton tread in those waters well in advance of Sarah Michelle Geller—the one for “victim” remained (and remains) intact.

Inclusion in the narrative of safety is a luxury reserved for certain kinds of women, and the way violence plays out for the rest remains largely outside of the media’s purview. The women who are viewed as worthy of protection are the same ones we see in stock photo archives, films, advertisements, and news stories. This construction of who is deserving of society’s time and resources is what fuels what Sheri Parks calls “missing white woman syndrome,” and why we know the names Natalee Holloway, Laci Peterson, Elizabeth Smart, Chandra Levy, JonBenet Ramsey, and Jessica Lynch, but not Sakia Gunn, Carmella Etienne, Jia Ashton, Joyce Chiang, or Shoshana Johnson.

Although much is said and done about ending violence against women, there are presumptions made about who that “neutral” woman is (e.g., white, middle or upper class, able-bodied, cisgendered, straight, modest, appropriately feminine and attractive), and this is a major problem when said “neutral” woman doesn’t actually reflect the women who are most affected by violence. The construction of her as “neutral” thereby makes the primary victims of gender-based violence invisible, and leaves out a substantial part of the story about how and why gender-based violence persists.

As Holly Kearl points out in Stop Street Harassment: Making Public Places Safe and Welcoming for Women, there are particular factors that contribute to the frequency with which a female-identified person is harassed in public spaces. These include “relying on public transportation or walking, being in public alone, living in populated areas, [and] being young.” Kearl found that 87% of women had been harassed in public by the time they were 19, and conversely, older women have expressed that as they aged they experienced harassment less frequently. Men often target those they believe to be the least powerful in the social hierarchy and, therefore, least likely to report them to (or be believed by) the police. (Let me submit as evidence two of the most public reactions to Dominique Strauss-Kahn being charged for raping a low-income woman of color.) All of this is to point out that young, low-income, city-dwelling women of color are at the top of the list of most likely candidates for street harassment. Being visibly trans, queer, and/or Muslim are strong indicators as well. However, this is not the face of street harassment that is most frequently shown.

Conversations around safety and violence prevention tend to assume that violence against women functions in similar ways for all women, but the reality is that it does not. Different groups have very distinct experiences of public and private violence, and we would do well to stop ignoring these intricacies, because in doing so we also lose sight of the way violence is impacted by systemic forms of racism, classism, heteronormativity, ability, transphobia, etc. While there are similarities, they do not outweigh and should not overshadow the effects of overlapping oppressions. The violence that different groups of women experience is wholly unique to their particular circumstances, and cannot simply be absorbed into the “neutral” woman paradigm. Instead, significant shifts must being made in the conversation around the nature of violence, the construction of “victimhood,” and the multiple strategies that need to be enacted to keep (all) women safe. We must raise the question of who is included and who is not in conversations about street harassment and other types of violence against women. Otherwise the drudges of feminist history will continue to repeat itself.

The persistence of the “perfect victim” archetype in emergent anti-street harassment work is stunning given the amount of effort that has been expended—particularly by people of color, queers, and folks from the working class—to deconstruct it, and it is indicative of the degree to which mainstream feminism has failed to internalize critiques that are necessary to make anti-violence organizing truly intersectional and justice-based. This failure to center the struggles of those most affected by street harassment and break down divisive cultural narratives undermines the examination of street harassment’s root causes and the development and implementation of effective systemic solutions.

More about this in Part II.

Disclaimer: I work for an app company.

We make a free personal safety app for iPhone and Android... One of the comments we get all the time is "this would be great for women who have left violent relationships" and "this would be great for.... (insert other marginalized group here)." The app takes photos, collects evidence, instantly emails them along with a GPS location, has a siren, etc... We aren't making cultural shifts here in redefining power relationships, but a tool for those who feel vulnerable and want help is a tool nonetheless.

I struggle with the fact that we offer a cool product that can work to mitigate some of the effects of street harassment, bullying, violence, etc.. and yet smartphones are expensive and these economic barriers are creating more power imbalances. One of the things I often think about is how the benefits of technology (in general) have failed to reach greater numbers of people, as significant portion of the population simply do not have the means pay for it.

Now we're talking about different groups that have different tools, or the lack thereof, to mitigate some of the abuse. I'm waiting patiently for a magic solution.

While I fully understand your struggle with the socioeconomic implications, I think you should let us in on the name of this app. One of the reasons I got a smartphone is because due to a disability (seizures mean no car for me), I walk EVERYWHERE (and almost always alone). Work, home, grocery store, to pay bills, jog for exercise because the nearest gym is too far, and due to this, even though I live in a relatively safe suburb, I am constantly being harassed- sometimes by 14 year olds! I'd love to have something like this at my fingertips- I just never know what to download.

Hey! There was a pretty informative article posted on Bitch a few weeks ago about apps that folks might need/love for security and convenience's sake; two in particular pertain to safety and street harassment. Here's the link below:
http://bitchmagazine.org/post/revenge-of-the-feminerd-feminism-theres-an...

There are many anti-domestic violence groups that collect and distribute old cell phones to at-risk individuals.

While there may not be a ton of smart phones being turned in yet, tech turnover so huge that there will be more smart phones freed up for donation soon. Your group created a good tool; don't waste time feeling guilt over not being able to come up with a "perfect" one. Every step brings us all closer to a better world. Not all DV survivors are low-income, and anyone looking to escape this treatment could use a hand.

PWCL.org will collect and distribute phones locally in Portland, OR. Please check your local listings to see if a Women's Shelter, Anti Domestic Violence organization, or other local charity will take and distribute your old phone. It costs nothing, and may help prevent another person from becoming a victim.

Recently I have been playing the newly released video game L.A. Noire, the premise of which is that you are a forties era police detective working his way through various departments (traffic, homicide, vice, arson). The game is smart and engaging, there are car chases and gun fights but most of your time is spent searching for clues and reading the facial expressions of suspects to determine whether they are telling the truth or hiding something.

But it was hard not to notice in the homicide cases that the majority of victims are slim white women (often discovered naked, beaten and bloody). This offers a clear indication of the idea our society has of the perfect victim. There are lots of problems with this idea, such as not paying attention to violence against other women and men (the fact that prison rape is often treated as a joke is pretty shudder worthy for instance) - but it also bothered me that violence against white women was so familiar and comfortable we can use it to have fun. Dead beaten white women make the game appealingly gritty and dark - but not too gritty or dark. Not something that would really disturb us. The idea of a video game where one constantly stumbled over the naked bloody bodies of black men, for instance, is deeply disturbing and that is probably the reason no one would think of making such a game, or would enjoy playing it. There is something de-humanized about white women as victims of violence in the media.

Just something more to think about. 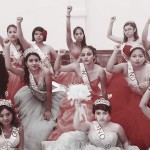 by Emilly Prado
This is the point where ball gowns and protest intersect.