Tales From The Crip: "How's Your News?" Is Back! | Bitch Media

Tales From The Crip: “How's Your News?” Is Back! How’s Your News?, America’s favorite (and only) newscast featuring a team of developmentally disabled reporters, has returned—and just in time for the 2012 presidential election! You may remember the team’s previous 2004 documentary, which chronicled their time at the Democratic and Republican conventions, or seen their wonderful MTV series (executive produced by South Park’s Trey Parker and Matt Stone). The gang is back from visiting the most recent political conventions, and their new film looks to be just as hilarious and awesome as their prior work. Right now, you can download “Election 2012” on their revamped website for just $5.

This time around, the HYN reporters interview celebrities and politicians ranging from Mitt Romney to Karl Rove to Diane Sawyer to…Jared Leto. (They also had some face time with the always classy Ann Coulter, who just last night tweeted about Obama being a “retard”). As always, the group is hilarious, empowering, and anything but the overly precious stereotype of people with cognitive disabilities found in most media.

Obviously, I’m a huge fan of this project. It’s refreshing, if not revolutionary, to witness what happens when a community so often robbed of their own voices under the guise of being “protected” has access to microphones. But more simply, this group just knows how to cut through the bullshit—and that’s always entertaining. (Watch the trailer, in which where one reporter is talking with Jon Voight and tells him, “I’m really glad I get to meet you. I’m a big fan of your daughter.”) You can find out more about How’s Your News and purchase their new video here. There’s also an old but great piece from This American Life that talks about the rich history of the project and features an interview with two of the reporters, Susan Harrington and Joe Simon.

Check out the trailer for Election 2012 below! 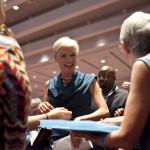