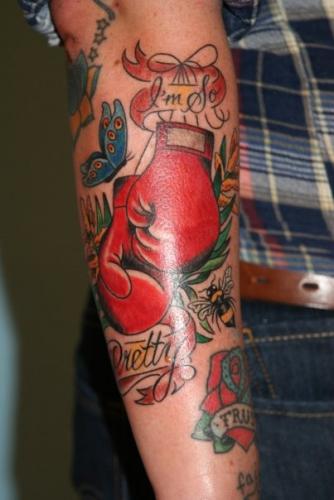 In my last post, I wrote about the wack representations of women and the invisibility of queer/trans-bodied folks in tattoo magazines like "Inked." I also mentioned that I have been collecting tattoos and stories from fierce, funny, and thoughtful folks I know for my book. Many of these people have graciously agreed to allow me to share their stories with you, which is something I will do from time to time in the coming weeks.

So, to cleanse the "Inked" palette, here is the story behind one of my top ten favorite tattoos of all times. I feel  grateful that my dear friend, a writer and photographer who prefers to remain anonymous, has put this bit of beauty into the world. I hope this bring as much joy to you as it does to me.

"I have been fascinated, moved, inspired, renewed, and amazed by the Champ my whole life. Never has a sports figure transcended his title in such gargantuan fashion as Muhammed Ali. His career and his life have been so extravagant and generous, his impact so difficult to measure in its breadth. His poetry--both in the ring and dropping from his wise ass mouth--has stayed with me always.

Ali's daring to speak of race from the position of 'just a boxer'--to insist, in fact, on being a proud black man when the papers refused to call him 'Muhammad Ali' for years--moved racial politics and bullshit in this country forward so much further than people can comprehend. He has been a boxing champion unequalled in sheer impact, and he has been a human being on this planet that had been an inspiration to me in ways I cannot begin to describe.

My dear friend Sam McWilliams did this tattoo in a lovely shop out by the ocean in San Francisco. This one took about three hours and I think it's my 35th. I've been getting tattooed for twenty-one years--that's more than half my life.

Boxing gloves, a floating butterfly, a stinging bee, and his quote "I'm so pretty"--a double entendre, a kind of spell one puts on oneself. American women, much like American black men,  are never encouraged to feel good about themselves. This is a quote that speaks to so many devalued folks about just showing up."

Page, thank your friend for sharing this lovely tattoo. I never thought of Muhammad Ali as an inspiration in this way, but this piece definitely shows him in that light. I love it!