As part of my ongoing effort to bring you incredible tattoos and the stories behind them--and after my experience seeing the fantastic film "9" (have you seen it yet, by the way?)--I thought it only fitting to introduce you to Clare McBee, and the story behind her gorgeous leg piece, located in a sprawling swirl on her calf.  Clare is a Community Health Worker at the PACT Project in Dorchester, MA, where she works with Boston's most marginalized HIV patients. Besides being a generous, brilliant genius, Clare is also my sister. And, as you will see, her story is a fantastic tale of spiritual adventure, myth, and healing. This, in her own words, is the story of the Nine Waves.

At first glance, most people think my tattoo says "nine lives." I suppose this isn't too far from the meaning. Nine is a number that has fascinated the human race for a long time. Composed of three trinities (3 times 3), the number nine is revered in Hinduism as a perfect, divine number because it represents the end of a cycle in the decimal system, which originated from the Indian subcontinent three thousand years before Christ. In the Islamic calendar, Ramadan, a period of fasting and prayer, falls on the ninth month. In Chinese culture, 9 (九 pinyin jiǔ) is considered an auspicious number because it sounds the same as the word "longlasting" (久 pinyin jiǔ). The Greeks honored nine muses, and the Egyptians revered nine neteru, or gods. In Christian symbolism, there are nine orders of angelic choirs in nine circles of heaven, and nine orders of devils in nine rings of hell. In numerology, the positive aspects of 9 are completion, interrelatedness, compassion, forgiveness and justice.

When I was sixteen, I developed a terrifying seizure-type disorder that left me crippled by frequent fainting episodes. I would flail about gasping for air, my heart pounding, my consciousness slipping away, convinced that I was dying. I went through a gamut of medical examinations, and I was tested for everything from a brain tumor to a heart condition.  By the time I turned seventeen, it had spiraled out of control. I couldn't do normal things at night for fear that another incident would happen and I would be trapped in a movie theater or car. One day I came home from school desperate for relief. I hadn't slept normally for a month. I was going through my days in a haze, floating two feet above myself. The year of inconclusive medical exams had gradually persuaded me this wasn't entirely physical in nature.

I told my mom that I had to get help right away, before I lost my mind. Confused and exasperated, she told me to look online for a mental health clinic nearby. It was May 2, 2001, and it just so happened to be National Anxiety Disorders Screening Day; I could walk into any hospital and get a free evaluation and counseling. My mom and I went to a nearby hospital, where I was told I had an anxiety disorder with severe panic attacks. The psychologist looked me straight in the eye and said, "There is something going on in your life that is unacceptable to your mind and body. To find relief, you have to find the source of this pain and address it." Everything changed after that day. May 2 became my Great Awakening, my new birthday.

As a teenager, I read a lot about Wicca. (I was an angsty girl who burned incense and loved that terrible film, "The Craft." Embarrassing, but true). A few months after I found out I had an anxiety disorder, I was flipping through my Spring 2000 to Spring 2001 "Witches Almanac," reading the ridiculous suggestions that accompany each day, like "plant your harvest in the full moon of the Goddess," or "burn sage and call the four corners." Curious, I flipped back to May 2, 2001. Much to my chagrin, all it said was "Collect the ninth wave." What the hell does that mean? I started to hunt for clues. According to ancient Irish lore, the name of the Otherworld is Tir Na n-Og, or "Land of the Youth." It is described as a mysterious archipelago to the west of Ireland, where the mortal curses of suffering, old age, and death are lifted. It can only be reached if one sails past the "ninth wave," which is the horizon, the last known boundary of the human world. For Irishmen to sail past the ninth wave meant exile from everything they knew. Like other Celtic traditions, the legend of the ninth wave was integrated into Wiccan rituals. This final wave, a powerful culmination of sea and wind, became a potent Wiccan symbol for spiritual growth. In the "Rite of the Nine Sisters," if the performer wishes to catch the ninth wave, she chants: I am an indestructible stronghold/I am an unshaken rock/I am a precious stone/I am the luck of the week.

My life came to a standstill on May 2, 2001. I knew I couldn't move forward without massive change. And it just so happened that I reached out and the universe placed this great gift in my hands. The powerful symbolic qualities of that day became apparent to me only months after. This is the lure of 9 that has captivated so many humans throughout history. I had collected my ninth wave, had moved beyond everything familiar and destructive and into a new and better awareness.

In 2006, I was finally able to honor this day with my tattoo. It was done by the incomparable Chad Chesko at Fat Ram's Pumpkin Tattoo in Jamaica Plain. I told Chad the brief history behind it. Unable to draw well, I described a dream I'd had about a dark ocean full of striking red haired mermaids. I recalled feeling protected and calm swimming among them, and how I'd woken up and known this was my ninth wave. The anchor appears for its obvious symbolism of stability. The mermaids as liminal, transformative guides. Chad came up with a beautiful tattoo.

For me, tattooing is a way of paying tribute to chapters in my life. There is something ultimately comforting and affirmative about undergoing the ritual of tattooing--you carry on yourself a beautiful, symbolic, meaningful piece of art that is, ultimately, going to fade away when you do.

Beautiful story. Thanks for sharing it. Being contemporary pagan myself and having learned to live with an anxiety disorder, I can really relate to this article, and I think a lot of other young women can as well.

Thanks for posting! Really enjoying this series of posts. I rarely get to see articles about the feminist implications of having a tatoo(s), or women's tatoo experiences in general. I think that dialogue is valuable and this subject should be explored more often. 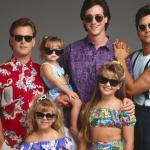 by Susannah Dainow
Full House's D.J. Tanner was my first love, long before there were any queer women on TV.