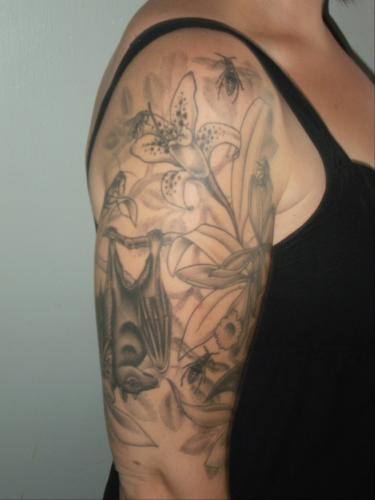 In yet another entry in my one-person attempt to override the portrayal of women/queers/everyone else in dumb tattoo magazines like "Inked," I present Ana Maria Ventura, a totally awesome San Francisco high school teacher who has many incredible tattoos. The description that follows, in her own words, is in regards to a fantastic piece on her arm and involves Spain, big questions about home, and bats.

Spain, the country where my dad is from, has long been a place I have felt fascinated by. On a recent trip there, I realized that I wasn't necessarily in love with Spain as a whole, but with Valencia, the city where my dad grew up. Because Valencia is the place where I feel most at home in the world, I wanted something to symbolize my love for this city. The city symbol (its coat of arms, I guess you would call it) for Valencia has a bat perched on the top of the flag. Bats are very common in Valencia, and are included in much of the architecture, are stamped onto manhole covers, and also represent the Valencian soccer team, which is a huge source of pride for the city. I wanted a bat as a personal, discreet representation of the city of Valencia. I have also just always kind of liked bats.

I never intended this tattoo to be a half sleeve. When I first decided to get a bat tattoo, I wanted it to be located in my arm pit. The artist blatantly told me "no," so I decided to have a small one placed on my bicep, along with a vanilla flower. Eventually, I decided I wanted more flowers and another bat, this time hanging, on the back of my arm. The artist suggested adding some bugs, and I decided to get a number of bees because they represent the Utah part of my heritage. Finally, I wanted some sort of background. The artist didn't really understand what I wanted, but somehow came up with the idea of very lightly shaded leaves with no outline.

Essentially, what I intended to have take three or four hours and a few hundreds bucks turned into a year long project that turned out amazingly well considering my initial plans for it. The actual experience of getting tattooed was great--I had been tattooed numerous time before, so I knew how much pain to expect.

A friend of mine told me a few years ago that people were working on developing a type of tattoo ink that would last only as long as you wanted it to (for life, if you wanted), then you could get some sort of laser procedure and the ink would dissolve back into your body, as though you'd never been tattooed. The experience of getting a tattoo would be the same in terms of discomfort, etc., but to me it seems to defeat the purpose of getting a tattoo. There is something about that life committment that seems... vital to the process.

This is not to say that I don't ever feel some regret for having numerous, and a few very large, tattoos. Recently I have felt lot of grief and regret in regards to my tattoos, but if I had to choose between keeping them and watching them disappear, I would have to keep them. They are a part of who I am in the present, as well as relics of my former selves.