Teen Sexting isn’t the Problem—Non-Consensual Forwarding of Photos Is. 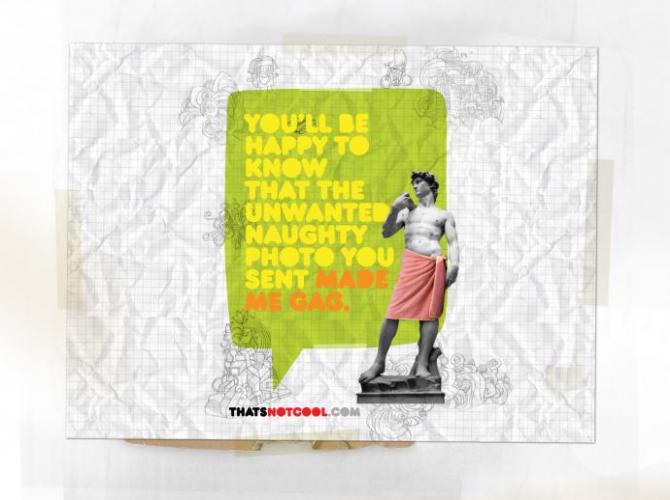 For years now, parents have been routinely perplexed by how their kids decide to share salacious photographs of themselves, and, especially if those children are girls, how they pose provocatively for each other. Likewise, police departments and tech companies, wrestling with what constitutes “child porn,” are struggling with the fact that teenagers are not just the subjects of what is legally categorized as “pornography,” but are, actually producing it and consensually sharing it with one another. Possession of naked and sexually explicit pictures of people younger than 18, regardless of the age of the person or whether they took the photograph or consented to it being taken, is a felony in many states. Everywhere, authorities are grappling with whether to treat teen sexting as a deviant crime or as a normal part of teen sexual development. 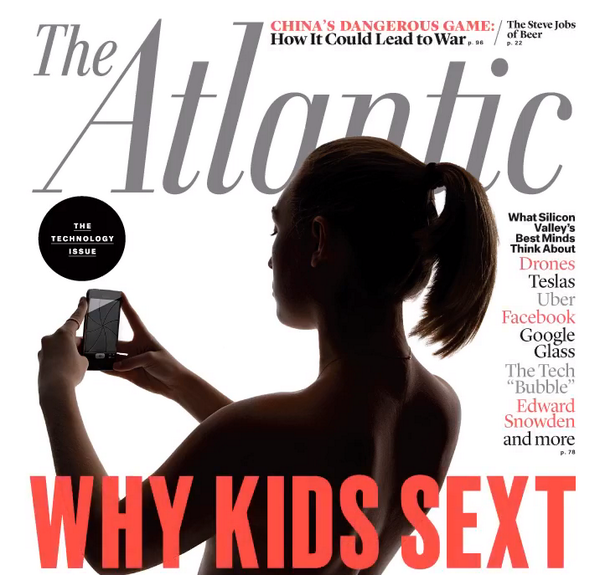 This was illustrated multiple times in Hanna Rosin’s cover piece this month for The Atlantic, “Why Kids Sext,” which described a “sexting scandal” that shook a Virginia community.   But the important question isn’t actually why kids sext. It’s who forwards sexts.  Kids sext, for the most part, because they are exploring relationships. We need to recognize that all sexts are not created equal. There is a difference between a teen taking a nude selfie to share it with a specific person and that person’s non-consensual sharing of that image with others. Forwarding sexy images meant for your eyes only is a violation of trust that has the potential to substantively hurt the person in the photograph, particularly if that person is female. Authorities—school administrators, parents, counselors, police, media—frequently combine the two acts. Failing to distinguish between these acts perpetuates a culture that ignores consent and reinforces sexist double standards regarding gender, sexuality, and privacy. A review of ten public service campaigns aimed at reducing teen sexting found that “several campaigns specifically frame sexting as a problematic behavior of girls, and some engage in female victim blaming.” That research points out that legal experts as well as teenage girls in focus groups “have recently drawn attention to the problematic tendency for public discourse and educational campaigns to blame female victims, rather than bullies” who forward sexts.

Rosin describes a case in Pennsylvania where a local district attorney threatened to bring child-pornography charges against girls who showed up in widely pictures. In a similar incident last year, a girl at a private school in Alexandria, Virginia was expelled after she texted a topless photo to two boys whom she trusted and who then shared it widely. The boys were not censured.  Earlier in the year, the city of Cincinnati, dealing with widespread sexting among high school students, decided to punish the ten girls whole photographs were shared the most. In another case cited by Rosin, in which the more typical gender relation is reversed, two girls convinced a boy with autism to send them a picture of his penis. They shared it widely and the police chose to go after the boy.

Consensual sharing of intimate images is not uncommon. And it’s often not considered deviant by those doing it. Many, many people receive sexts, men and women both.   But then, something happens. Instead of just keeping the photos on their phones, boys and men share these images in disproportionately high numbers. 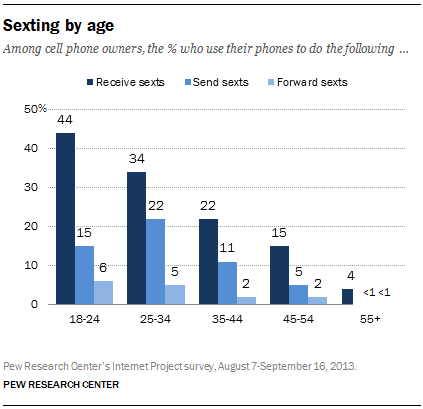 People of all ages sext—but teens are most likely to forward photos.

Some studies revealed that boys are up to three times as likely to share photos without consent.  A 2012 survey of 1000 black and Latino tenth graders revealed that boys are twice as likely to report sharing photographs as girls are. Boys were also significantly more likely to receive these images, from other boys.  Given the numbers, this means that girls are trusting their male friends and that trust is alarmingly likely to traded away. The problem that parents need to consider is that there is such a huge gender divide in respect for privacy and consent.  Boys are clearly not being taught to respect girls’ consent and privacy in equal measure.

Girls are negatively affected by sexting in ways boys aren’t—and they  understand that a double standard is at play. Girls who share are seen as sluts. Those who don’t are seen as prudes. When asked in a 2013 study, teens equally said that sexting disproportionately hurts girls. What they haven’t been asked, as far as I can see in the more than 60 studies I examined, is the flip side.  How does sexting, and the ways in which people respond to it, help boys?  The phrase “male sexual entitlement” doesn’t roll off the tongues of most people. This lack of empathy and respect has other implications however.

Without a doubt, boys are also subject to sexual coercion and are victims of the sharing of non-consensual photography.  However, sexting patterns consistently indicate this gendered dynamic in who repeatedly asks for photos and who shares them without consent. Girls appear to be sexting often because they are being pressured to share pictures and are socialized that it’s important to please men. The data shows that 13-year old girls are more likely to send images upon request, whereas 13-year old boys send them unsolicited. This indicates that both girls and boys are prioritizing male sexual desires over female sexual desires.  By the time a girl is ten, having fully incorporated the male gaze into her sense of self, she can “produce sexy” on demand. There is tremendous pressure to act sexually as an exhibition of gender status.

However, the boys, too are performing. What they are engaged in is an unempathetic, coercive masculinity where they leverage—consciously or not—an unfair double standard to enhance their status. As one child in Rosin’s article put it, some boys trade images like baseball cards, barely even looking at them. In teen sexting, too often the point isn’t the pictures but the power.  Anti-violence advocates have worked extensively to understand the connections between the two. “There is a clear connection between the sexual violence continuum and the coercive behaviors used to get a sexted image,” says the National Online Resource Center on Violence Against Women. As with other more adult and extreme forms of violence, the threat of forwarding along sexts comes not from strangers but from people girls know and trust. These behaviors are precursors to adult revenge porn, where more than 90 percent of targets are women and men make up the vast majority of perpetrators.

A study conducted by the London School of Economics explained that, while girls “are increasingly savvy at protecting themselves from so called ‘stranger danger’ they are having to face a new problem of ‘peer to peer’ approaches with boys constantly demanding sexual images.” However, they added “while some girls are developing sophisticated techniques to deal with this pressure, others are left struggling to cope and feeling unsure of what to do.” 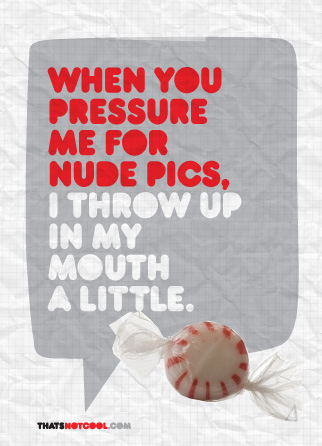 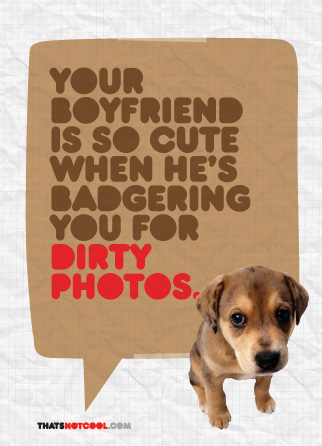 Now, some people read that and think “crying victim” and “demonizing boys,” to which I say, no, both girls and boys lose in this equation.   Girls and boys are not social or cultural equals and, when it comes to sexting, both learn that the sexual objectification of girls is social (and sometimes economic) currency.  What does it say that a 13-year old boy sells, for $5.00 a pop, pictures of his eight-grade girlfriend?

Schools, parents, and police use the term “sexting scandal” but they are in fact describing demonstrations of gendered, coercive sexuality. This fact speaks to a difficult reality (rarely implicated in outraged commentary on sexting) that people this young already see coercive sexuality—in which gender bullying, harassment and violence persist—as normal. The same London School of Economics study described how families and schools often hold girls solely responsible when sexts are shared without their consent. The approach seems to be, “What did you expect?”

Maybe privacy. Maybe respect. Maybe empathy. Maybe equality. Maybe the pursuit of mutual pleasure.  Many people wave away the casual passing along of photographs as pranks.  But dismissing non-consensual sharing of naked photos as a joke minimizes gendered harm such sharing can have to girls’ rights, reputations, and feelings.

What is most disturbing, however, is that concerned adults seem genuinely confounded. It’s as though kids turn 13 and independently and spontaneously, because of “raging hormones,” start to objectify, rate, and shame girls, especially “bad” ones who express themselves sexually. In point of fact, it makes sense that boys share images of girls as objects.  It’s traditional. Young people are taking in lessons they’ve learned from parents, from religious ideas about sexuality and gender, from mainstream media depictions and, often, seriously flawed “sex education” classes and filtering them, quite literally, through their phones.  Non-consensual sharing of sexual images by teens is part of a broader culture in which sexual surveillance of women without their consent is endemic, in which women’s appearance and sexuality are constantly monitored and regulated on sidewalks, at work, and in school, and in which the shaming of women is a used as a tool to negotiate male status.

It’s not just girls who are hurt by this culture. What does stripping boys of the ability to empathize to do them and the people around them?  Catherine Steiner-Adair, a clinical psychologist, school consultant and author of The Big Disconnect: Protecting Childhood and Family Relationships in the Digital Age, explained last year in response to questions about the broader culture that sexting is part of, “We are neglecting the emotional lives of boys.” Girls and women continue to pay a high price for that neglect.

“Child pornography” has nothing, ultimately, to do with teenagers sending sexts to other teenagers.  Sexting becomes a problem of safety when teens, regardless of gender, start sharing and selling personal images with no respect or regard for the feelings or rights of the people in them.  If parents are genuinely concerned about their children sexting, then the place to start is having conversations about consent, privacy, and power at the dinner table—long before they even have phones.

Related Reading: This slightly NSFW comic lays out a primer for safer sexting.

Soraya Chemaly is a media critic and activist. She writes about the role gender plays in politics, religion, technology and pop culture. You can find her on Twitter @schemaly or on her Tumblr. 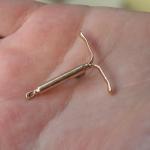