Texas has been in the national spotlight for its restrictive new laws that have closed two-thirds of the state’s abortion clinics. But another insidious way the state is trying to control women’s reproductive rights has gotten less attention: local prosecutors locking up pregnant women who test positive for drugs.

The crackdown on pregnant women is part of Texas lawmakers’ hostile culture toward reproductive rights. Today, the Center for Reproductive Rights, the ACLU, and Planned Parenthood filed a petition challenging a major part of Texas’s new abortion restrictions, which have cut the number of abortion clinics in the state from 24 to six. It can be hard for women to travel the long distances to the state’s few clinics—even before the new laws passed, the number of self-induced abortions was higher in Texas than elsewhere in the country, particularly among those living along the Mexican border.

While the state is creating barriers to getting a safe, legal abortion, law enforcement agencies are simultaneously policing women’s bodies by incarcerating pregnant women who use drugs. Although Texas law prohibits law enforcement agents from arresting women for using drugs while they’re pregnant, that hasn’t stopped police and prosecutors. In 2009, Texan Amber Lovill was six months pregnant and on probation when she relapsed on meth after staying sober for two years. Although probation officers have the discretion to allow people who test positive for drugs to remain free, Lovill was arrested and sent to the Nueces County Jail. She spent the remainder of her pregnancy in the jail while awaiting a space in a drug treatment facility for felons. Probation officers testified that they would have been willing to work with Lovill rather than incarcerate her if she hadn’t been pregnant. Lovill challenged her incarceration in court, arguing that she was incarcerated because of her pregnancy.

Over 50 medical, public health, and child advocates took Lovill’s side, filing a brief in support of her claim of wrongful imprisonment. “Imposing or threatening increased punishment of women who become pregnant creates pressure for pregnant women, especially those struggling to overcome an addiction in the short duration of pregnancy, to have abortions, an outcome clearly not rationally related to any asserted state interest,” the brief states. It’s also wrong-headed to think, as law enforcement agencies apparently do, that incarcerating a pregnant woman will lead to a safer pregnancy. “Incarcerating pregnant women actually increases health risks, not only to the unborn, but also pregnant women and the children they give birth to,” says the brief.

Amber Lovill is not the only woman who has been incarcerated for “crimes” against her fetus. Check out this infographic detailing prosecutions of pregnant women for crimes against fetuses from the Huffington Post: 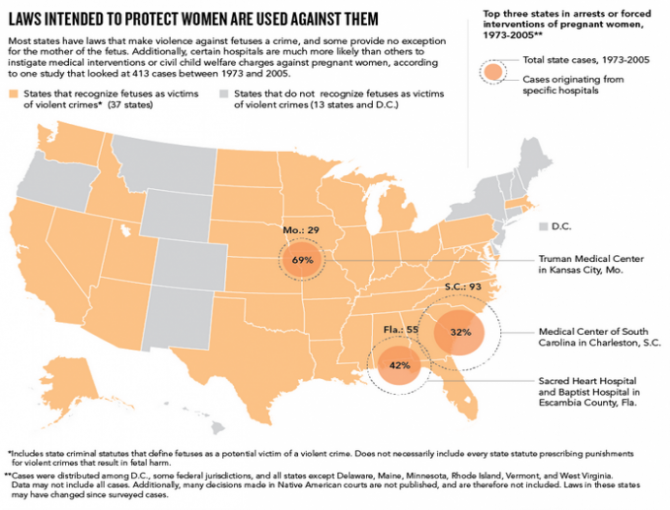 Farah Diaz-Tello is a staff attorney for reproductive justice organization National Advocates for Pregnant Women. She’s also a native Texan. “It comes as no surprise that the attacks on reproductive health are coming hand-in-hand with attacks on reproductive capacity in the form of child endangerment prosecutions of women who give birth to babies who test positive for controlled substances,” she says. “Both are based on ignoring the opinions of medical experts who are unequivocal in their opinions that restricting abortion access and criminalizing pregnancy outcomes are harmful to the public health.” She points out that while illegal drugs may carry a risk to pregnancy, so do cigarettes and other legal substances. A 25-year study following babies born to cocaine-addicted mothers found that, while children were slow to develop, the determining factor was the poverty in which they were raised, not their mothers’ drug use.

By incarcerating—or threatening to incarcerate—pregnant women for drug use, the state sends a message discouraging these same women from seeking prenatal care or substance abuse treatment. Take the story of South Carolinian Stephanie Green, who was recently convicted of in the death of her six-week-old child. Prosecutors claim that Green killed her baby with an overdose of morphine delivered through her breast milk. Green had spent more than 10 years struggling with constant pain after a car wreck and was taking prescription painkillers. When she learned she was pregnant, she hid her pregnancy from her primary doctor and sought prenatal care from a gynecologist. She did not tell her gynecologist about the painkillers she was taking. With the threat of prison hanging over their heads, how many other women have avoided seeking prenatal care or substance abuse treatment? 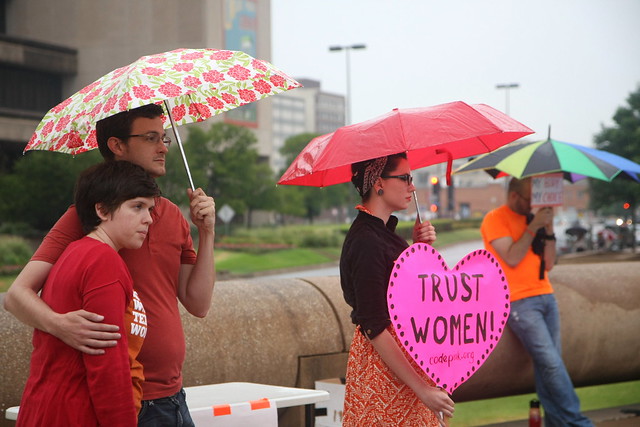 Folks in Dallas at the 2013 National Day of Action to Defend Women’s Rights. Photo by Steve Rainwater (Creative Commons).

Furthermore, like everywhere else in the world, state control over women’s bodies falls mainly on women who are marginalized by poverty, race, immigration status, geographic area, and other issues. At the same time that Texas attempts to dictate what women can and can’t do with their bodies, it also has opted not to provide the resources and supports women might need to address reproductive or other health issues.

Remember that Texas is the largest state to opt out of Medicaid expansion under the Affordable Care Act. The state’s decision to opt out means that approximately 2 million people who would otherwise have been insured will remain uninsured. While the inability to access medical care affects everyone, for women, it also means that reproductive health issues may remain unaddressed. For instance, Irma Aguilar, a Texas mother of four, earns $19,200 a year as an assistant manager at a pizza restaurant. Her four children are covered by Medicaid. However, Aguilar herself remains uninsured, meaning that her health needs—reproductive or otherwise—go unaddressed unless they become dire. And when they do, Aguilar, who has high blood pressure, is saddled with the cost of emergency care. In the past two years, she has racked up $80,000 in emergency room care.

If the state really cared about the safety of women and children, they should start with making sure everyone has access to safe, essential medical care.

Read more Douchebag Decrees, including a take down of how Hobby Lobby wants to the boss of our birth control.

Relevant: “Roe v. Wade” Must Include Abortion Access for Women In Prison 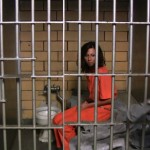 by Kay Winston
Accessing an abortion is an uphill and often impossible battle for people who are incarcerated.