The 99%: Undercover Boss and the Undervalued Worker | Bitch Media

The 99%: Undercover Boss and the Undervalued Worker

These days are tough for the American worker: the continuing recession and enduring unemployment, along with the decline of unions, make securing and keeping quality employment a challenge for many. And Undercover Boss isn’t making it much easier.

The premise of Undercover Boss is just what it sounds like: executives assume thin disguises, false identities, and contrived reasons for cameras to follow them around, and then shadow their employees to see what’s “really happening” in their business.  Of course, the shadowed employees are by no means selected randomly: each is either notably incompetent at their job or, more frequently, an example of a truly “deserving,” self-sacrificing employee with a story of family hardship, obstacles overcome, or mountains of medical and school debt.  At the end of each episode, the executive meets with the employees, reveals his or her identity, and typically rewards them with promotions or by paying off their debt or gifting extravagant vacations.

On Sunday’s season three premiere, Diamond Resorts CEO Stephen Cloobeck visited several of his hotels.  Cloobeck is instantly unlikable.  He talks about wanting to be a doctor or a surgeon, but that career path was “going to limit the amount of money [he] could make,” so he went into hospitality. He tells his wife to pack his suitcase for him (“like you always do”) before he leaves (and tells her to include a love note). He mentions how nice it is to avoid lines at the airport…. because he flies in a private jet. He can’t possibly stay in a regular hotel because his former “British commando” security guard says the structural integrity of the windows is lacking.

In short, Stephen embodies everything most people object to in the 1%. He’s out of touch, spoiled, and living entirely in a world that revolves around Stephen and maximizing the amount of money he can earn.  It seems redemptive when he later pays off an employee’s mortgage, and another’s school debt, and another’s mother’s medical bills.  (It also seems weird when he gives one employee a subscription to a meat-of-the-month club and a industrial refrigerator. But, whatever.)

Yes, this superficial redemption feels good.  In fact, it feels better than it probably is.  What about all the employees Stephen didn’t shadow? Is he improving working conditions company wide? Is he ensuring all employees have living wages?  Is he making the workplace more flexible for working parents, or increasing access to benefits, or developing a scholarship program for continuing education for his employees?  Not really (though he did tell one worker he’d get him better safety equipment, and some past CEOs have taken a more systemic approach—but they’re few and far between).  For working-class people, these policies can be the difference between sustainable employment that actually allows them to support their families, and something that falls far short of that.

That’s what unions are supposed to do. They’re supposed to help workers have jobs that are safe, fairly compensated, and provide opportunities for upward mobility.  But unions are having trouble doing that these days, in large part because so many legislators and executives (like the ones on Undercover Boss) are going so far to limit their power. As other writers have said, the show is “no substitute for worker organizing“—not by a longshot. Many of the executives featured on the show are specifically anti-union; they’ve fired pro-union leaders and campaigned against workers’ rights legislation.  Unsurprisingly, union leaders aren’t huge fans of Undercover Boss either, which the AFL-CIO referred to as  “a sweet, happy-ending tale for a handful of workers, but make-believe for millions of others.”  But it’s no fairy tale, and Stephen Cloobeck is no fairy godfather (despite his ability to decide who deserves what and grant wishes accordingly).  He’s a real employer with real responsibilities to his employees, and they deserve more than a few elaborate gifts doled out in what amounts to an extended public relations effort for the company.

Unions have bigger problems than a flawed television show, though. They have union-busting governors, increasing disapproval ratings in public opinion polls, and declining membership (and, consequently, political power).  This is a real loss for the American worker, and it’s a loss that they’ll feel long after the warm fuzzy feelings from watching Undercover Boss have faded.

Previously: “There’s Always Money in the Banana Stand”: Class Passing on Arrested Development, Why the Real Housewives of Atlanta Aren’t “Our Kind of People”

was repulsive. He was a spoiled child the entire time. He learned nothing from this experience. Some choice moments were his dramatic reveal to one employee as he grew increasingly frustrated and his sighing, "I'm boooooored" during one of the jobs. Are you kidding me, you tool?

Kind of off topic, but ugh. Zero redeeming qualities on this one. You think us poor people want meats of the month? Really?

Thanks so much for commenting on the atrocious TV show that is "Undercover Boss." The show's premise of "savior CEO" is disgusting. Sure it's nice to be an employee who gets some camera time and gifts such as the meat-of-the-month club (? hello gout!). But what about those hundreds (thousands?) of employees that work hard and get the same compensation and diminished rights as always? I deeply appreciate your pro-union position that I'm sure is totally absent in this program. Unions are essential in providing workers' rights to the underprivileged and marginalized.
This CEO sounds like a real blowhard, but I'm sure he "earned" everything he's gotten up to this point.

I want a meat of the month club. That shit's expensive.

Great article that looks beyond the superficiality of such "feel-good" shows. So while the working class is shows as uncouth and uncultured in reality tv, the 1% no matter what their personalities can redeem themselves by these individual and isolated acts of charity while off-camera perpetuating the very conditions that push people in debt and alienation.

I think you really highlight one of the major obstacles in American culture toward unionization and a sense of worker solidarity: we are such an individualistic culture, and that can stand in the way of progress. This show totally characterizes this notion that individuals who work hard and are "deserving" by some rubric should be rewarded, rather than advocating an idea that ALL workers are deserving of safety, financial security, and a sense of accomplishment and value in their day-to-day work.

In the latest episode of Undercover Boss (1-800-Flowers) at the end of the show the rewards are reduced dramatically. Three of the four employees got no monetary reward. One of their best employees receive a floral series named after her. How exciting. The lavish lifestyle was also not shown at the first of the show. Seem like the show had to change things to get CEO's to sign on to do the show.

Relevant: There Goes the Neighborhood 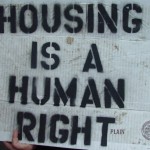 by s.e. smith
In cities with crunched markets, many people still can’t afford to buy or rent.