On March 7, 1942, fire engulfed the simple home of 89-year-old Lucy Gonzales Parsons on Chicago’s North Troy Street, ending a life dedicated to liberating working women and men of the world from capitalism and racial oppression. On the anniversary of Parsons’ death, take a minute to reflect on the life she led. 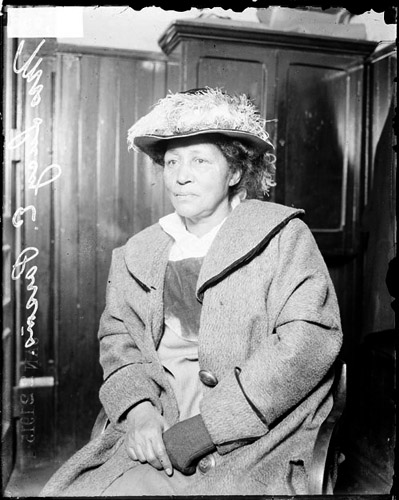 Lucy E. Parsons, arrested for rioting during an unemployment protest in 1915. Courtesy of the Chicago Historical Society.

Lucy Parsons was a dynamic, militant, self-educated public speaker and writer—she became one of the first prominent women of color to crusade nationwide for socialist and anarchist causes.  She started life in Texas, born into slavery in 1853. She was of Mexican American, African American, and Native American descent and after emancipation, the life she chose led to conflict with the Ku Klux Klan and many nights in jail.

She found a committed soul mate in Albert Parsons, a white man whose Waco Spectator fought the Klan and demanded social and political equality for African Americans. The white supremacy forces in Texas considered the couple dangerous and their marriage illegal, and soon drove them from the state.

Lucy and Albert reached Chicago, where they began a family and threw themselves into two new militant movements, one to build strong industrial unions and the other to agitate for socialism. Lucy concentrated on organizing working women and Albert became a famous radical organizer and speaker. 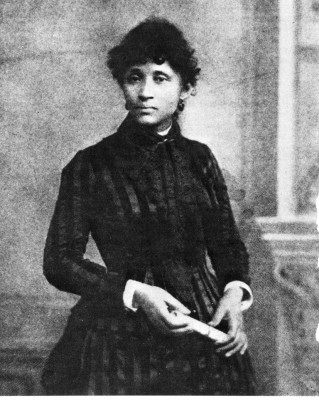 In 1886, the couple and their two children stepped onto Michigan Avenue to lead 80,000 working people in the world’s first May Day parade and a demand for the eight-hour day. A new international holiday was born as more than 100,000 people marched in other U.S. cities. By then, Chicago’s wealthy industrial and banking elite had targeted Albert and other radical figures for elimination, hoping to decapitate the growing union movement. Albert called a protest rally a few days after the May Day march—the rally became known as the Haymarket Riot when seven Chicago policemen died in a bomb blast at the event. No evidence has ever been found pointing to those who made or detonated the bomb, but Parsons and seven immigrant union leaders were arrested. As the corporate media whipped up patriotic and law-and-order fervor, a rigged legal system rushed the eight to convictions and death sentences.

When Lucy led the campaign to win a new trial, one Chicago official called her “more dangerous than a thousand rioters.” Albert and three other comrades were executed, and four others were sentenced to prison. Lucy, far from discouraged, accelerated her actions. Though she had lost Albert—and two years later lost her young daughter to illness—Lucy continued her crusade against capitalism and war, and to exonerate “the Haymarket Martyrs.” She led poor women into rich neighborhoods “to confront the rich on their doorsteps,” challenged politicians at public meetings, marched on picket lines, and continued to address and write political tracts for workers’ groups far beyond Chicago. 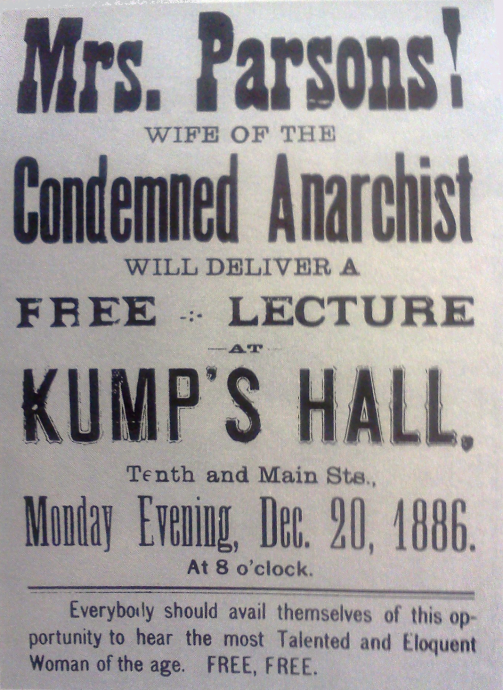 Though Lucy had justified direct action against those who used violence against workers, in 1905 she suggested a very different strategy. She was one of only four women delegates (one of the others was Mother Jones) among the 200 men at the founding convention of the militant Industrial Workers of the World (IWW) and was the only woman to speak. She advocated a measure close to her heart when she called women “the slaves of slaves” and urged IWW delegates to fight for equality and assess underpaid women lower union fees.

In a longer speech, she called for the use of nonviolence that would have broad meaning for the world’s protest movements. She told delegates that workers shouldn’t “strike and go out and starve, but to strike and remain in and take possession of the necessary property of production.” Eventually, the nonviolent principles that Lucy Parsons helped promote traveled to the U.S. sit-down strikers of the 1930s, Dr. King and the Civil Rights Movement of the 1950s and 1960s, the antiwar movements that followed, and finally to today’s Arab Spring and the Occupy movements.

Lucy was an unrelenting agitator, leading picket lines and speaking to workers’ audiences in the United States, and then before trade union meetings in England. In February 1941, poor and living on a pension for the blind, Lucy Parsons was the guest of honor on a union’s May Day parade float.

After her house burned down, federal and local lawmen arrived at the gutted home to make sure Parsons’ legacy died with her. They poked through the wreckage, confiscated her vast library and personal writings, and never returned them to the family.

Lucy Parsons’ determined effort to elevate and inspire the oppressed to take command remained alive among those who knew, heard, and loved her. But few today are aware of her insights, courage, and tenacity. Despite her fertile mind, writing and oratorical skills, Lucy Parsons has not found a place in school texts, social studies curricula, or Hollywood movies. Yet she has earned a prominent place in the long fight for a better life for working people, for women, for people of color, for her country, and for her world.

William Loren Katz adapted this essay from his updated and expanded edition of Black Indians: A Hidden Heritage (Atheneum, 2012). It is part of the women in labor history resource created by the Zinn Education Project, which supports the use of A People’s History of the United States and other materials for teaching a people’s history in middle and high school classrooms across the country. Coordinated by two non-profit organizations, Rethinking Schools and Teaching for Change, the project emphasizes the role of working people, women, people of color, and organized social movements in shaping history and offers more than 100 free, downloadable lessons and articles organized by theme, time period, and reading level.