“The Americans,” Sex, and Power 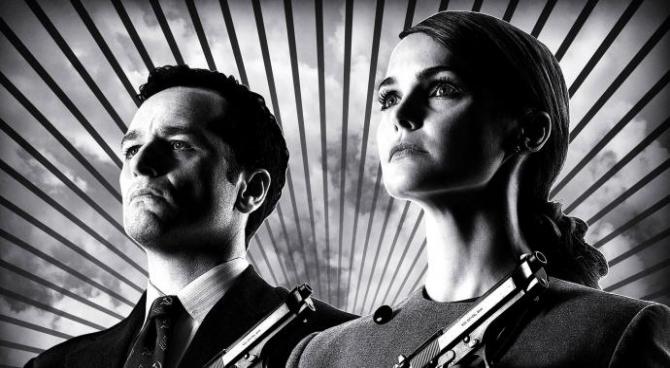 Sex and sexuality can be deadly. This message is one of the main undercurrents of The Americans, the fast-paced, highly intellectual drama featuring Soviet spies posing as a boring married couple in the Washington, D.C. area during the Reagan Administration. The first few episodes of this third season features lots of sex. But the sex is used strategically, a tool that the show’s chracters use to manipulate one another.

I’m not really into spy thrillers or action movies, but The Americans has held my attention for a few reasons. Spies Elizabeth (Keri Russell) and Philip (Matthew Rhys) are perfectly paired and have incredible chemistry. These two are rightfully the center of the action and, around them, a half dozen character actors make the show impeccable. But what I love most about The Americans most is its sharp take on gender and power.

In the world of The Americans, women have as much power as men, if not more. Very little of the power women wield is sexual. Some of it is domestic—Elizabeth’s power as a domineering matriarch overshadows Philip role in the family. You get the sense that if she needed to hunt down her food, kill it and fry it up, Philip would only be necessary for making sure the beast was really dead, and Elizabeth would do all the rest.

The Americans does feature a couple characters who feel stereotypically prudish and manipulative, but ultimately, these aspects of womanhood usually turned around at some point. This is true most for Claudia (Margo Martindale), Philip and Elizabeth’s new KGB handler who looks a bit dowdy and sweet, until Elizabeth kicks her butt and she snarls back like she can take a butt-whipping with the best of them.

One fascinating aspect of the show is how Philip and Elizabeth are slowly recovering from marital issues. The two are pretending to be a married couple, but clearly develop an emotional connection. While the series focuses on their marriage and partnership in their work, they are both unsure as to wehther what they have is normal marital love.  Their lack of clarity isn’t particularly surprising, since their alternate identities—especially Philip’s—include side affairs and sometimes marriages.

There are many spoilers ahead, so if you need to leave, you should come back after you’ve seen the premiere of season three. (You can also read this good recap at USA Today.) 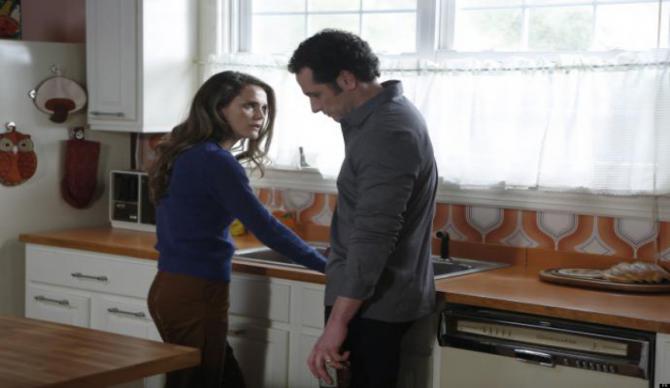 In the season’s first episode, Elizabeth puts a few FBI agents who try to corner her through some serious hell and comes out of it with a bruised jaw and a bruised shoulder. As in so many previous episodes, Elizabeth is the living embodiment of a woman who seems to pay a steep price for equality—she generally comes across as being tougher and more distant than every American man on the show (and some of the Russians). She could be a classic femme fatale, but the show’s writers respect her more than that. She’s not a one-dimensional designation like her friend Sandra, who is more of a sketch of the long-suffering wife of an overworked, unfaithful man. Elizabeth is a complex, commanding character and the show is better for it.

In the seaon’s first episode episode, we see Elizabeth in her role as an aloof mother in a scene where she and her 14-year-old daughter, Paige (Holly Taylor), are at the pool. She notices her little girl timidly assessing the deep end of the pool, checks to see if there are any likely disapproving mothers who can see her, then shoves a shrieking Paige right into the deep end.

We know that Elizabeth is not about that “girly” life, especially when she is least successful as a spy playing the supportive mom role by spending time with Paige at church, suspiciously eyeing Paige’s crushes and her pastor. So, when Elizabeth’s handler tells her to go be a good American wife, he also offers her up information she can use, framing it as a gift. It turns out to be a voice recording from her mother, who is dying. This seems to lend more urgency to extending the Jennings’ spying legacy to Paige—there is no talk of the future for her little brother, another interesting twist.

The women on the show who do play typical femme fatales—spies who rely heavily on their sexuality to get their job done—often don’t fare as well as Elizabeth. Two characters in this vein have disappeared or wound up dead.

What we see in the first episode of the season is that women are well aware of what the consequences of sex and sexuality are; the men think they understand. But these are still women in a man’s world.

Joshunda Sanders is a writer based in Washington, D.C. She tweets @jvic.