The Biotic Woman: A Conversation About Carnism with Melanie Joy (Pt. 2) | Bitch Media

The Biotic Woman: A Conversation About Carnism with Melanie Joy (Pt. 2)

A professor and psychologist who works to promote empowering relationships between humans, animals, and the earth, Dr. Melanie Joy recently spoke with me at length about her new book, Why We Love Dogs, Eat Pigs, and Wear Cows: An Introduction to Carnism. Our talk is split into two parts here this week. Please check out the first half of this interview from earlier this week!

What are some of the similarities between violent ideologies that affect people, animals, and the planet?

In order for violent ideologies to persist in any democratic society, they must have popular support. Yet most people wouldn’t willingly support the intensive, extensive, and unnecessary suffering of others. Most people care about other sentient beings. So ideologies such as carnism use a set of social and psychological defense mechanisms that enable humane people to participate in inhumane practices without realizing what they’re doing. Violent ideologies are all structured in a similar way; they teach us to shut down our awareness and our empathy.

The primary defense of a violent ideology is invisibility and the primary way the system remains invisible is by remaining unnamed: if we don’t name it, we can’t talk about it and if we can’t talk about it we can’t question it. The beliefs and practices of the ideology are simply considered a given, just the way things are. Naming the ideology is essential to dismantling it; imagine trying to challenge male dominance, for instance, without having identified patriarchy. The victims, too, are kept conveniently out of sight and therefore out of public consciousness. When it comes to carnism, the nonhuman victims are hidden in remote locations in windowless factories. In some cases, though, the victims are at once invisible and in plain sight, as with objectified women whose images are splashed across magazine pages and television and movie screens.

But invisibility inevitably falters, and so violent ideologies must employ a number of “backup” defenses. A common defense is what I call the Three Ns of Justification: eating meat/male dominance/heterosexual supremacy/slavery/ecological colonization, etc. is normal, natural, and necessary. These justifications are of course myths, but they’re embraced and supported by all social institutions and presented as simply common sense.

How can people use empathy to counter violent ideologies?

The good news is all violent ideologies are also transformed by the same approach. Transforming violent ideologies requires that we reconnect with our empathy for others. In other words, we must choose to bear witness—to see with our eyes as well as our hearts, to reflect on our own privilege while we challenge the privilege of others. Virtually every atrocity in the history of humankind was made possible because the populace turned away from a reality they felt was too painful to face. And virtually every social revolution was made possible because a group of people chose to bear witness and demanded that others bear witness as well. So, while social change is a complex process, the cornerstone of this process is witnessing, and as witnesses we can become a part of the solution for all social transformations.

So. True. I guess that's what spoke to me as a vegan reading "Vegan Freak"...that it's not a bad thing to be seen as a total weirdo or sometimes outcast b/c the norm is so fucked up and arbitrary. 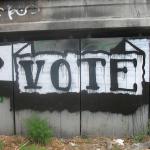