This weekend, the New York Times Magazine—a publication I admittedly adore—asked what I consider to be a very simple question: "Is There An Ecological Unconscious?" The story opened with details about coal mining—fwiw, the profession of my great grandparents—but quickly moved on to the psychological aspects of ecological concern.

While I'm pleased by the piece and thrilled that concepts like ecopsychology, solastalgia, and rewilding (a topic that will soon be featured in this space via the work of Caroline Fraser) could be introduced to such a wide audience, I also wonder why the idea of ecological and psychological unity is novel. Shouldn't it be apparent that the destruction of one's home—the fact that many people around the world are forced to witness and survive the demolition of their communities and lives—would become a larger, collective problem as people en masse prepare for and deal with climate-related catastrophes?

This isn't a new phenomenon; the article glosses over the ways that indigenous communities have long been the ones to bear the brunt of this problem. Even today, some of the most overlooked areas of the world—low-lying island nations like the Maldives and coastal regions in Bangladesh, to name a few—continue to face the biggest challenges associated with climate change and environmental degradation, and some groups are at unusually high risk of becoming climate refugees. Mass displacement sure seems like a cause for widespread grief, if not outright psychosis.

I get that major publications aren't going to jump on what they consider to be a fringe movement or issue until it gains some popular support. But what always bothers me about these write-ups is that someone with publishing clout has the authority to finally decide that the topic is worth exploring. It reminds me of guys like Jonathan Safran Foer or Matthew Scully, who suddenly have an epiphany about eating meat or animal welfare and want to tell everyone (at least, when it's politically convenient). Problem is, women have been working on these issues for decades without the recognition that comes from high-profile book deals or NYT Mag write-ups. Should we be thankful when these issues are covered by mainstream media or annoyed that our work has once again been relegated to the margins of the larger movement?

Aftershock: Confronting Trauma in a Violent World: A Guide for Activists and Their Allies by pattrice jones (whose work will also be explored in this space in the coming weeks)

Well to me half the problem is that men are default "authorities" on subjects (hence mansplaining as societal trend) whereas women are lucky to be noted as experts (as opposed to only "sexperts" a la carrie bradshaw) let alone authorities even when it's their due.

Funny you mention Aftershock, when I read it I got interesting bits here and there about psychological reactions to societal & enviormental ills - moreso regarding this authority-proclaimed "age of terror" and how that forces people to (re-)act - but overall found it incredibly dry, overly academic in terms, and a hard read. And I love nonfiction so it's really not that. It just struck me as the sort of text likely to appear in a grad school course and nowhere else.

<i>Should we be thankful when these issues are covered by mainstream media or annoyed that our work has once again been relegated to the margins of the larger movement?</i>

It chaps the vegan feminist hide to see the media fall all over itself whenever well-connected, mainstream white dudes point out the myriad problems with widespread animal agriculture (you know, what many women journalists/theorists/academics have been saying for many, many years). BUT. I'd happily forgive all that if only those dudes did us proud. But more often than not, Foer, Scully, et al. water down what starts out as (or has the potential to become) a strong animal <i>rights</i> message, wasting their 15 minutes to instead push a weak, vaguely defined animal <i>welfare</i> ideas. "Animals can feel pain and suffer, so eat cage-free eggs and free-range meat!" "Eating meat when there are viable alternatives is wrong, but if you must eat meat, at least don't eat in on Mondays!" "72 inches of space for every layer hen!" 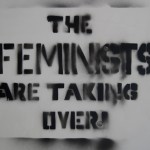