The Box's Crush of the Week: Daniel Dae Kim

My Daniel Dae Kim crush began when I first saw him on Angel as Gavin Park, a rising star at an evil law firm. (Those cheekbones! That comic timing!) But of course, he's best known as Jin-Soo Kwon on Lost. After only one season on network primetime, Kim already had enough people crushing to earn a spot on People Magazine's "Sexiest Man Alive" list 2005. Since Asian men normally get an asexual treatment on TV, it's refreshing to see that Daniel Dae Kim has maintained official heartthrob status, and proved his acting chops too.

Jin's character arc over the first four seasons of Lost also subverts expectations. He started out as an overbearing husband in the stereotypical Asian tradition (with an exceedingly timid Asian wife to match). But over the course of the series, Jim and Sun's relationship has been revealed to be a lot more complicated, and has grown to be more loving and equitable.Plus...

We thought Jin died but he is ALIVE!!!! 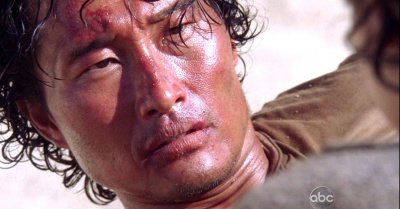 OMFG. Jin, are you okay? I was so worried about you! I totally cried when the freighter exploded with you on it. And also when Sun took your baby to visit your grave. SO SAD. But now you're okay, if maybe lost in another time and pretending to be dead to protect Sun. Still, this is awesome. You are the best!!!

Some of us haven't seen the most recent episodes of LOST (my excuse is that I live in India and have to wait until I can download the episode from the Interweb, which can take up to 3 weeks after an episode has aired) so how about you put a spoiler alert at the top of a post like this?

Or... perhaps you should avoid reading current posts about Lost if you are behind?

When the freighter blew I was hoping he got catapulted into the sea! Yeah, the Jin and Sun relationship has really developed. He is much more reasonable and decent. Notice how he stayed till the last minute with Michael on the freighter. When he and Michael first got to know each other they were adversaries. And Sun is developing into an independent woman not to be trifled with! I loved her ever since she shot Colleen on Desmond's boat. All bets are off! Love it :-)

I've been a fan of LOST from day one, and i love that LOST is full of eye man candy. I've always thought Daniel Dae Kim was hot (along with Naveen Andrews and Matthew Fox). I like the portrayals of men of color on this show. They're not sterotypical and they're all strong leads. They're all interesting and intriguing and I appreciate how they point out ignorant things. Like on this past episode, Jin was trying to explain something in Korean so Sawyer asks Miles to translate and he says the best line every "Dude, I don't speak Korean; I'm from Encino."

Anyways, LOST rules and rules even more because of the sexy men.