The Box's Crush of the Week: Jaime Pressly | Bitch Media

The Box's Crush of the Week: Jaime Pressly 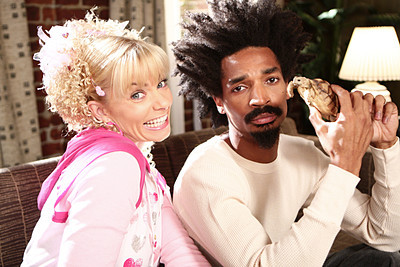 Extensions off to Jaime Pressly, one of the funniest women on TV. Her Emmy award-winning portrayal of Joy Turner on My Name Is Earl is so solid that it’s easy to forget she’s a bonafide sexpot (with credits like Playboy spreads, countless “sexiest women” list mentions, and the lead in Poison Ivy: The New Seduction on her resume). Of course, Pressly’s hotness isn’t anything out of the ordinary: she has blonde hair, blue eyes, big boobs and a button nose.
Yawn, right? But it’s Pressly’s self-awareness that allows her to take her conventional looks to cartoonish heights as Joy. And therein lies the comic genius.

Like most of the characters on My Name Is Earl, Joy is a charicature of (pardon the expression) poor White trash. She lives in a trailor park. She’s blindly patriotic. She doesn’t understand or believe in evolution. She loves Jane Seymour.

You get the picture. But the whole thing about My Name Is Earl is that it presents stereotypical characters and then plays them against type. Pressly does this better than anyone, making Joy – who is unapologetically ignorant and mean-spirited – laughable, and even likeable. This season she’s developed even further, proving her smarts by pulling of MacGyver stunts (“Nature’s Game Show”) and learning Yiddish (“Darnell’s Outed”). Now that’s the kind of subverting of class and gender expectations I like to see. So hurray for Jaime Pressly, my favorite foxy funny lady!

She's the funniest thing on <i>My Name is Earl</i>, hand's down!

She is great as Joy, but I remember her best as Audrey in Jack & Jill, which I'm now embarrassed to have admitted watching.