The Box's Crush of the Week: Mindy Kaling | Bitch Media

The Box's Crush of the Week: Mindy Kaling

Of all the weird and wonderful characters on The Office, Mindy Kaling’s portrayal of Kelly Kapoor is perhaps the most loved. Kelly’s just guaranteed to be funny, whether she’s obsessing over her co-worker boyfriend, failing at girl talk with her female co-workers, or doing cheer routine about how her day is bananas. Sure, her co-workers may be drunks, religious fanatics, and/or survivalists, but Kelly’s indomitable naivete is especially strange in the dreary setting of an office. And, of course, she’s blissfully unaware that she’s out of place.

Witness one of many You Tube tributes:

Kelly’s funniness lies in her hyper-feminity. None of the other women can relate to her obsession with fashion, celebrity gossip, and boy drama. In fact, Kelly’s girly-girl persona emphasizes how alien this kind of feminity is to most women. It’s like she lives in a fantasy world that is somewhere between a Spice Girls video and an elementary school production of Sex and the City. And if Ryan the temp is a disappointing Mr. Big, Kelly’s blissfully unaware of that too. Watching her in throes of what she considers to be an epic romance with someone who’s barely interested is laughable and cringeworthy. But it’s also nice to be able to laugh at a situation that is so often treated seriously in lady-targeted entertainment.

I suspect that even girly-girl viewers who are in love with a no-good co-worker, and also love “pink the color, Pink the person, hot dogs, and basically anything that is awesome” can still have a good laugh at her exaggerated bubbliness and brilliant comic timing.

In addition to acting on The Office, Kaling’s one of the the show’s producers and an award-winning writer. She also has a blog called Things I’ve Bought That I Love [newer address: http://thingsiboughtthatilove.com/ ] which features really delightful reviews of things like Uristat, sour candy, and fancy sneakers. (Don’t be confused by the fact that the name on the blog is “Mindy Ephron.” I have no idea what “Ephron” refers to. Maybe she loves romantic comedies?)

I’m not sure if Mindy Kaling would call herself a feminist, or if she would consider her performance of Kelly to be groundbreaking. My guess is that she’s just doing what’s funny because that’s how she do. But seeing a truly talented comedienne doing somthing new with a done-before role is plenty for this girl to crush on.

That bananas clip is my favorite thing that has happened on The Office EVER!

Oops, the link I posted leads to the old address. Here's where to read Mindy's latest observations on fashion and stuff. http://thingsiboughtthatilove.com/ (It's really fun!)

"It's like she lives in a fantasy world that is somewhere between a Spice Girls video and an elementary school production of Sex and the City. "

This might be the best sentence i have read all year...

yeah it makes me kinda want to see an elementary school production of Sex and the City. 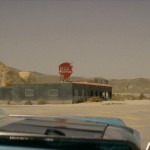