"The Butler," My Grandmother, and the Politics of Subversion | Bitch Media

“The Butler,” My Grandmother, and the Politics of Subversion My grandmother, Geneva Wright, in the 1950s in Syracuse, New York.

I grew up hearing a story. My grandmother was a cleaning lady for a white family that kept the fingers and toes of black people in a jar on their mantle. No, this was not slavery. This was 1940’s South Carolina. When I saw Lee Daniels’ The Butler, I thought of my grandmother’s experience, and how one can endure and somehow withstand dehumanization on a daily basis, only to survive, and love after it all.

Written by Danny Strong, The Butler is loosely based on the life of Eugene Allen, an African-American man who served as a White House Butler for four US presidents, from Eisenhower to Reagan. Forest Whitaker’s character Cecil Gaines, who is modeled after him, becomes an eyewitness to major events in US history.  I’m not a big fan of Lee Daniel’s past work, and this post is neither an endorsement of him nor a glowing review of the film. For what the film does most effectively is juxtapose varying degrees of subversion within the black community. The progression of individual subversion was made palpable during sequences that were edited together and crosscut to reveal the dual lives that African Americans lived, and continue to live, in order to survive. One of the most powerful sequences shows Cecil’s son Louis (played by David Oyewolo) and his love interest Carol (Yaya Dacosta) being trained for a lunch counter sit-in by civil rights leader James Lawson (Jessie Williams) at Fisk University, while Cecil polishes silverware in the White House kitchen. Later, Louis and Carol are harassed, maimed, and threatened by white patrons at the lunch counter, while the film cuts to peaceful scenes of Cecil and other black butlers tending to a lively dinner party in the White House. These scenes jump back-and-forth, colliding with one another until a white man throws a pot of hot coffee into Louis’ face, scalding him. He screams in pain, while his father Cecil suffers his own quiet pain working in the White House to provide money for his son to go to school. When a white person spits on Carol and she fights to maintain her composure, I was reminded of how my grandmother had to fight to maintain her composure when faced with that jar of black body parts.

If my grandmother were alive today, I think she would appreciate some elements of the The Butler. Like Cecil’s character, her entire life was mitigated by the institutionalized racism surrounding her. She was unable to finish school because her family had to tend the land as sharecroppers, in another form of enslavement.  Though she would bear the pain of these experiences throughout her life, she went on to move to the North, have a family, provide for them, and cultivate a beautiful, warm home in which they could grow up. No one ever went hungry. This is revolutionary.

It is revolutionary to maintain humanity and self-respect in the face of ever-present violence and brutality. This is also a tenet of Martin Luther King Jr’s nonviolence doctrine and, in fact, there is an important scene in The Butler where Martin Luther King Jr (played by Nelsan Ellis) expounds on the role of black domestic workers in the struggle for civil rights and their role as subversive figures. Again, the film is expertly edited—that powerful scene is followed by one featuring Cecil in the presence of the current president. Later, when a debilitated Richard Nixon reaches out for comfort from Cecil, the butler doesn’t give it, instead dealing with his own internal dilemmas. There’s a certain power there; people who performed this type of domestic work weren’t obedient caricatures, they weren’t “mammies,” they were human beings with their own problems, pain, and inner lives.

I appreciate The Butler for the editing (by Joe Clotz), the juxtaposition, and its black-centric lens. It is not The Help. White characters are secondary to the black familial life in the film. Through the family relationships, we are able to see the diverse ways that black people resisted white supremacy—be it through daily subversion of racism, through humor, or through direct protest to those institutions. Oprah also gives a powerful performance as Cecil’s wife Gloria, who yearns for inclusion into his world, while also struggling to keep her family together.

We are often taught not to see these people as heroic, as militant, or complex, but they are. With the recent Harriet Tubman sex tape and the growing erasure of history related to black resistance in education and media, I sometimes wonder if we understand just how powerful this legacy is. It is because of my grandmother, and my ancestors, that I am here today. And I will never be ashamed of that.

Sounds like your grandmother worked for a family of sociopaths.

"I was reminded of how my grandmother had to fight to maintain her composure when faced with that jar of black body parts."

Sounds like she was a saint. Goodness. I probably would have barfed and called them psychopaths and told them to f- off.

I'm looking forward to seeing the film, and I appreciate your honest and excellent review and commentary.

I loved this essay - it captured how I feel about the film, both the positive and the negative. Thank you Bitch for publishing this!

However, as a filmmaker myself, I have one critique. The editing is excellent, as Nijla Mu'min points out. But the editor's last name is Klotz, not Clotz. And the co-editor, Brian A. Kates, also deserves credit for this great work.

Its amazing how i see your and Mahasin's face in your gradndmother. Beautiful

I really enjoyed your piece Nijla. I'm going to keep an eye out for more of your work.

The point you're making about the erasure of black history is so relevant. The real story needs to be protected and Shared. Shared. Shared. With everyone but most importantly our black youth. I hear young black people throwing around the n word loudly in open spaces, in front of crowds of people. It always makes me cringe and wonder how much of that has to do with the lack of historical reference. I think some.

Sorry for the tangent :) but again great thought provoking piece. 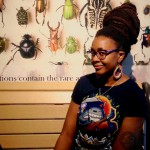