The Dating Game: End Game (Or Ten Ways Not to Dump Someone) | Bitch Media

The Dating Game: End Game (Or Ten Ways Not to Dump Someone)

Breaking up almost always sucks no matter which side of the equation you find yourself on (abusive relationships being sometimes, though not always, the exception). If you are doing the breaking, you've basically got to have some sort of confrontation with someone you cared about (and perhaps still care about) that you know will hurt their feelings, at a bare minimum. If you're being broken up with, someone you care about is telling you that your feelings are not and won't be requited, and that singlehood is preferable to your company, no matter how little commitment or emotional attachment there actually is.

I am old enough and have dated enough to have been on both sides of this ugly divide —and have made enough poor choices to have been subjected to some (in retrospect) pretty hilarious dumping scenes. So, if you are absolutely incapable of ending a relationship with dignity, mutual respect and honesty, at least try not to do it any of the following ways that were done to me.

9. "My [cult leader] says I can't keep dating you unless you join, so how about, for our next date, we attend a meeting?"

8. "My boyfriend isn't comfortable with us getting any more serious."

4. "When I said I wasn't ready to be exclusive, I meant I wanted to have sex with other people. That didn't mean you could!"

3. "I just really think I deserve someone thinner and prettier."

2. "Hey, so, just so you know, last night, I totally fucked this other girl, I just wanted to let you know before anyone else at this party did, since they were all there when we started hooking up."

1. And, presenting in graphic form, the ugliest way anyone ever dumped me: 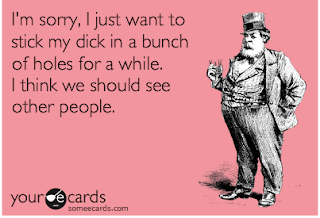 I have to know if this is really all true or exaggerated?

Why joke when the truth is so much funnier?

Personally, I would like to hear the comebacks to some of these. Damn.

I think #3 is just horrible!! I am so very lucky as to not have many horrible breakup excuses. I'm glad you can now realize how stupid these people were and can laugh at it now!

Yup, these are pretty classic. My personal top worst break up was radio silence out of nowhere, then a pathetic two line break up email. Then sneaking into my place while I was at work (where he'd been living as well. Roommates unknowingly let him in) to clear out his stuff. To this day, I never saw or heard from him ever again. (Oh, and he was the classy sort to have been talking to me about combining our finances the week before and he'd just bought a bunch of groceries and made plans for a shared future. It was a couple of days before Christmas, and we had vacation plans the following week for my birthday & New Years.) Real charmer, that one.

Together for almost 6 years, living together for over 5 years. He broke up with me over text message, saying it wasn't about another woman. It was. True story.

The race issue is a creative added touch in #1, but I'm a big fan of any breakup excuse that starts with "my mom." From "my mom thinks I'm too young to settle down" to "my mom thinks I could do better," it's classy territory. (in case you're wondering, I got one of those and a friend got the other)

I got "My mom says I need to think about myself for once." And this was less than a week before our rent was due. I ended up having to pay his half, of course.

I need to be with someone who wants to talk about Star Trek...

guy had his dashboard decorated like the control panel of whatever that spaceship is called...

by Erika Moen
Artist Erika Moen weighs an offer to be in a sexy movie, talking over the possible repercussions with a friend.