The first time I realized that the then-ubiquitous online personal ad banners on websites serviced real people—lots of them—was when I caught my boyfriend of two and a half years using one in 2002.

Lest you think I was snooping or even mildly suspicious (sadly, I wasn't), I had hopped on his computer that fateful morning to check my work email, only to discover that before I could type the second letter in "mail" that his browser filled in "myprofile.personals..." Crying, I called his office and he raced home; he eventually admitted everything, including that he couldn't get anyone to go out with him, and we agreed to try and work it out. I wasn't sure whether it was more humiliating that he advertised to the world that he was trying to fuck someone other than me, or that no one else would actually fuck him. Unsurprisingly, the relationship didn't work out.

Since then, I've known friends who have had many more positive experiences than I with online dating—people who have met long-term relationship partners, people who have begun romantic relationships that ended in good friendships, and even people who have used it to meet sexual partners without using it to cheat on their significant others. But, I've had one more significant other use it to try to determine if the grass is really greener on the other side of the monogamy fence, which made me ever more wary than I was before.

So I basically stayed away, except when I used it to indulge my morbid curiosity whether I could find the people I was dating on a site. And, in the midst of one dating dry spell and on a friend's advice, I scrolled through the ads on one free site but found myself suspicious of each and every person, wondering if the other side of this cropped picture was a smiling (and still current) girlfriend, or if a particularly female-friendly list of movies in that profile was an indicator that someone's significant other had dragged the person along.

Which is not to say that I haven't dated anyone after meeting them online—far from it, actually. From a rather infamous bad date with a commenter on my personal blog to an e-introduction that ended in a mediocre-relationship-cum-best-friendship to many a date arranged over email, I've used the Internet to conduct my dating life, while still maintaining a determined distance from personal ads. Part of that, for me, is the serendipity of meeting someone, that spark before you really know them and the ability to cross-check at least some minimal references are all important—and, given that I am not really the type of person specifically looking for a relationship or even to date for its own sake, putting a lot of effort (and money) into doing so always seemed like a waste of time.

So, what's the difference between using the Internet to start a relationship, and using online personal ads? Damned if I really know... but, even if I did and even if I was looking, I don't think I'd be filling out a Match.com profile. But, for those who do, I wish you better luck than me, and just as good a luck as my ex had: after we broke up, he met his now-wife through an online personals site.

I met my dude of four years on MySpace, which will forever date us fairly precisely to 2005 (well, actually, January 1 2006). I got a lot of requests for sex, so his request to "maybe chat or hang out" really stood out (also the fact that he's a Christian Bale lookalike did not hurt).

He pretends that this did not happen and that we met at a party - which we did, he happened to be at a mutual friend's birthday party two days after messaging me. But I think there's something almost quaint about our MySpace meeting, even if he deleted his account less than a year later thanks to its impending obsolescence (and a triflin' ex).

I met my husband on an online dating site. Granted, you have to be cautious, but you have to be that way no matter where you meet the person, whether it's on the street, in a library, or online. I have had my fair share of shady guys come up to me on the street and the said library, and also online. And you can check the person out before you meet. Plus, there are cheaters that go to any location to pick up a fling and pretend they're not with someone else. The medium is irrelevant in my opinion. If it wasn't a dating site, it would be something else.

As a gay lady, I have found online dating a lot of fun and very helpful. I don't like the idea of 'gaydar' because I think it's based almost solely on stereotypes, and makes me uncomfortable. However, this leads to me not knowing who to hit on at all, much less if I would anyway because I can be quite shy around pretty girls. Online dating sites that are open to all sexualities are great then, because you (assumably) know right off the bat if someone is gay, straight, or bi (I haven't found any sites with further options...).

I met my current girlfriend and several friends through the free dating site OkCupid. I like this site far better than any other ones I have found because it's free, allows for a variety of sexual orientations, and has a culture beyond just dating (personality tests, forums, etc.) so a lot of people just kind of fall into setting up a profile after first using it for something else.

Anyway... my experience with free, mostly non-discriminating dating sites are overall positive. I have STRONG reservations against sites like eharmony.com.

I liked your response, and can relate a tiny bit, but I was curious and maybe over stepping the line to ask why not e harmony. I have never had experience with online dating sites and am in a LTR, but I still get curious about the pros and cons of these sites.

Another queer proponent of OkCupid here...

eHarmony was founded by an evangelical christian and does not allow same-sex matching (although after they settled a lawsuit they did set up a separate site), and in any case they admit their algorithm is based on research of only opposite sex couples. Sites like eHarmony and Match.com require you to pay a subscription fee, and are focused on finding marriage partners.

OkCupid on the other hand is free, open to all users, and doesn't presume that you're looking for a long-term relationship leading to marriage, and is welcoming to queer and poly folks.

This is so true. I'm glad you brought this aspect of it up. I am currently married, but in an open relationship. I only sleep with other women outside of my marriage. So outside of looking for another woman who likes other women (which is complicated enough) I have to find someone that is okay with me being married, too.

But I don't agree with "gaydar" either. I never get hit on by women because everyone assumes I'm straight. The online thing makes this a lot easier.

Your submission has triggered the installed spam filter and will not be accepted.

Just great. Type for an hour, get snubbed by a robot

If you register on our site (you don't have to use your real name) you should have less of an issue with our spam filter. Sorry about the robot snubbing!

i get caught in the spam filter with every comment, have to do a second Captcha each time, and don't mind one bit. On my WordPress blog i must get 20 to 30 spam comments a day for cheap Viagra, Ciallis and other stuff. They Spammed a post i did titled "Stop Spam Comments" with a link to my Comment Policy. It got spammed immediately. Fortunately all comments on that blog are moderated by a human (me).

It seems like there's a whole slew of spam comments that come in after midnight EDT. The nights when i was staying up late and commenting on Bitch Blog posts i noticed that mine was often the only real comment on the topic of the post. That pharmaceutical spam was out of control. Clearly a stricter spam filter was needed here on the Bitch Blogs and i don't mind.

<b>On this post topic:</b> i went on OkCupid looking for pen-pals and still haven't figured out what good a "Quiver Match" is to me. i posted the question on my OkCupid Journal and got zero responses. Maybe someone here can tell me what the difference is between a Quiver Match and a regular match and how, if at all, matches could apply to me.

One couple I know who used a dating site got married, and another is having a child together. On the other hand, I know a woman who's getting married soon, yet she's still actively looking for other guys through a dating site. And as for myself, I've never managed to line up a single date through a website, and I've used multiple ones. So it goes.

I found my current boyfriend on OkCupid. I went out with a lot of "misses" before I got a "hit" so I think online dating is just like anything else.

It's funny you should mention this---I was just cleaning my my OkCupid inbox yesterday. (I'm not quite not how to turn off my profile without completely deleting it.) I'll admit, I kept maybe one or two guys in my inbox in case my current guy doesn't work out.

I met my current girlfriend on okcupid as well and being someone recently out of the closet and with absolutely no gaydar whatsoever, it helped a great deal. I even ran into several people I was either already friends with or knew from school lol.

It's kinda funny how our attitudes to personal and dating sites have changed over the past few years: it seems not too long ago when online lovin was for losers and perverts, but today nearly everyone does it.

Relevant: The Pleasure Dome: Use Your Words 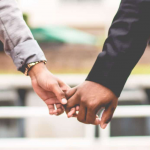