“The Fall” Reverses the Regular Gender Roles of Crime Dramas 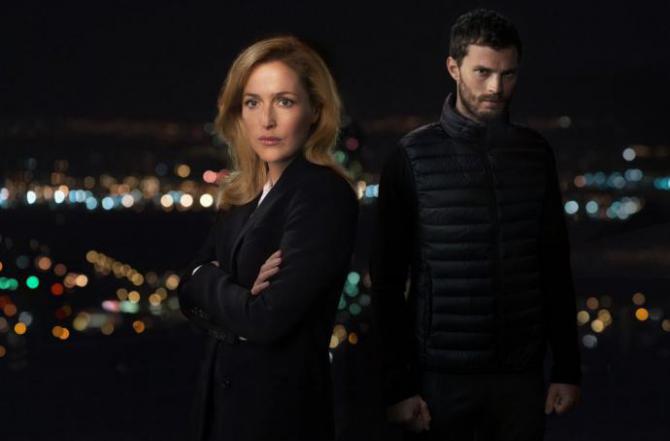 There is a moment halfway through season two of BBC serial killer drama The Fall when the indomitable Detective Superintendent Stella Gibson (Gillian Anderson) rebuffs a pathetic advance from her drunken boss. Afterwards, as he sits nursing a bloody nose on the edge of her hotel room bathtub, he asks Gibson, “Why are women spiritually and emotionally so much stronger than men?”

She replies coolly, “Because the basic human form is female. Maleness is a kind of birth defect.”

I had to pause the show and take stock. Was this still real life or had I finally begun to hallucinate my own fantasies into television shows? While that moment might have been the most overtly feminist line of dialogue spoken on the The Fall so far, it’s far from an isolated moment within the context of the show. From the first episode, The Fall has taken pains to establish—sometimes ham-fistedly—an explicitly sex-positive, pro-women ethos that is rare in such a notoriously fraught TV genre.

In contrast to the range of capable, accomplished, and principled female characters who either assist the ludicrously competent Gibson in catching serial killer Paul Spector (played by Jamie Dornan) or are targeted by him, on The Fall there is hardly a single sympathetic male character. Indeed, showrunner Allan Cubitt seems to take grim satisfaction in representing every brand of male violence (physical, sexual, discursive) imaginable. The men of Gibson’s police department are largely dense, corrupt and victim-blaming. Then there’s also a defrocked pedophile priest, a rage-filled man who beats his wife, and of course there Spector himself, who loves his children, hates abortion, and spends his nights methodically stalking and strangling professionally successful women.

None of this makes for easy watching, but it is exhilarating to see a reversal of the way gender politics normally work in television crime dramas. Here, only the women are fully human. The men are for the most part flattened into monsters, cliches, and plot devices. I, for one, take a guilty pleasure in this. For me, watching The Fall is an incredibly cathartic experience.

Here’s another favorite moment of mine that gives you a feel for the show: In one episode midway through season two, Gibson meets up in a hotel bar with a woman who works as a pathologist. When Gibson has to go deal with some business, she returns to find a name-dropping human fedora is buying her pathologist-date a drink. Gibson sweeps in, takes the two martinis from him with thanks, and passionately kisses her date. When he blusters that he is not a waiter, she dunks on him by asking, “Then why are you still standing there?”

Gibson herself is The Fall’s answer to the endless parade of white, male, hard-nosed, “genius”-type protagonists who have long been a staple on television, like the main characters from House, Sherlock, Breaking Bad, White Collar, Psych, The Mentalist, and Dexter, to name only a handful. The Fall is obviously not the only recent crime drama to feature a tough, capable female detective as its lead—in fact, she’s in good company with Sarah Lund of The Killing, Robin Griffin of Top of the Lake, Catherine Cawood of Happy Valley, and of course, Olivia Benson from Law & Order: SVU. But in comparison, Stella Gibson is primarily an aspirational character. Where other shows focus on writing their female detectives with as much relatable and gritty realism as possible, Gibson is all smooth surfaces and sharp intellect. She possesses multiple degrees, sleeps with whoever she wants, owns an endless supply of pristine silk blouses, and has an incisive understanding of how exactly law enforcement can become complicit in violence against women. She decries monogamy, seeks out both male and female sexual partners, and repeatedly shuts down her male colleague’s attempts to dehumanize, idealize, pigeonhole, judge and dismiss the female victims they are supposed to be protecting. She is not intimidated by anyone–not by the sexist media that attempts to discredit her investigation, not by a group of men who corner her on a dark street, not by the serial murderer who breaks into her hotel room and reads her diary. Gibson is far more like a crime-solving superhero than a real, flawed human being. It’s telling that the few attempts that The Fall makes to establish a personal backstory for Gibson tend to feel awkward and out of place. I like how she’s unrealistic.

Having such a superhuman character at the helm of show whose subject matter is sexualized violence allows viewers—female viewers in particular—to process the real-life horror of that violence in a productive way. Just as Law & Order: SVU offers viewers the fantasy of a “controllable world” and home invasion movies allow a way to express anxiety surrounding domestic violence, The Fall reassures viewers that in a delicious alternate universe, Stella Gibson is out there vanquishing violence and delivering justice through sheer force of will. When watching The Fall, for the length of an episode it is possible to imagine that corrupt police officers are actually put in their place, that intended victims are rescued, that abusers are stopped, and murderers are caught. 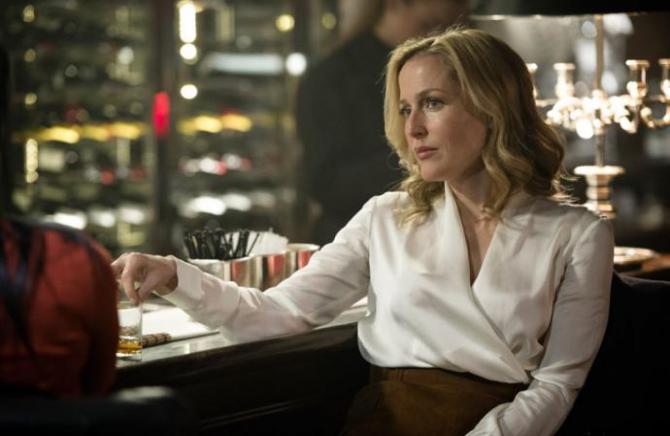 Additionally, it’s refreshing to see a show that presents its villain as a rather ordinary man. Unlike other series (Dexter and Hannibal come to mind), The Fall strips its serial killer of glamour by exposing the utter banality of his evil: Paul Spector is just another woman-hater who uses his very normalcy to fly under the radar.  Although he takes up just as much screen-time as Gibson, Spector is given very little interiority. Gibson pegs the root of his murderous rage as run-of-the-mill misogyny, and we are given no reason to suppose otherwise. Even Spector himself, in his own words, admits that there is absolutely nothing that the women he stalked and killed had done to deserve their fate–how grim that it feels novel to have a show make it clear that no woman should be blamed for her own murder.  The Fall populates its universe with “bad” male characters and “good” female ones not because it is man-hating, but because it is attempting to hammer home the point that the real-life epidemic of violence by men against women is a product of widespread misogynistic ideas that are held by millions of ordinary people–not just the monsters.

Just to be clear, The Fall is not flawless television. The dialogue can be clunky, the pacing is sometimes off, and plot holes abound. But it feels significant. The Fall’s fantasy world in which men are largely ineffectual or dangerous, and it’s up to powerful female characters to save the day is a not an accurate representation of what real-world feminism believes in or strives for. Nonetheless, it’s a cathartic power fantasy for viewers who have been fed the reverse narrative since birth.

Sophia is an aspiring critic and wayward American living in Melbourne, Australia (for now).

Thanks for your insights on this show. I recently started watching it, and while the content is hard to watch, I am a huge fan of Gillian Anderson. All the articles I've read talk about how it confronts the viewer with the challenge that the actor who plays Spector is handsome, so the viewer is confronted with feeling an alliance with him. This is not a challenge that I am faced with, because there is nothing attractive about the actor who plays Spector, although he does do a believable portrayal of him.

Anyways I just wanted to thank you for the article.

I watched the whole series and it brought to mind another well made British crime show starring Dame Helen Mirren, Prime Suspect. Anderson did a good job of holding the tension just under the surface so it was palpable.
Her character, DCI Tennison, was also a flawed but in charge woman who wouldn't take the crap her collegues threw her way.
I am almost 50 so I remember when women started becoming the heroins of a movie or show.
It's a shame that there are so few and that when there is one, it makes the news.

Okay, you kind of pulled it out there at the end with that last paragraph, but I have to say, that you started off on the wrong foot. Calling maleness a kind of birth defect is not a feminist statement, and it is not one of Gibson's overt feminist moments.

There is nothing inherently wrong with men, there is something inherently wrong with sexism, misogyny and violent masculinity. This article glossing over a statement that calls men deficient by birth, calling it an overly feminist statement, is tacit support of a form of gender essentialism and hateful remark that, if said about women, would cause a well warranted and justified outcry.

p.s. That kissing scene was a moment of terrible consent, with Gibson using a woman and sexuality to put a man in his place, without checking in with said woman. It was a territorial and extremely masculine moment. I did not read her meeting with Reed Smith as a date.

I really thought this comment was going to call out the transphobia in that statement but, alas, it's just another "not all men"...

Stating that maleness isn't a birth defect isn't another "not all men" comment, because it doesn't excuse misogyny or patriarchy. It states a simple fact: there is nothing inherently wrong/disordered/pathological with being born male. Just like there isn't anything inherently wrong/disordered/pathological with being born female, trans*, gay, black, latin@, see where I'm going here?

How bout a bit a bit less sighing and flopping about that someone didn't say exactly what you wanted them to, and instead, say it yourself. Go ahead and make the transphobia call out, otherwise this comment just reeks of more-radical-than-thou.