The Feminist Facebook Army: How FORCE Spoofed Victoria's Secret with Social Media (and Didn't Get Sued)

Baltimore feminist group FORCE took the world by surprise last December when they launched a line of fake Victoria’s Secret, dropping underwear emblazoned with phrases like “Consent is Sexy” and “Ask First” at Victoria’s Secrets around the US and promoting the fake Pink Loves Consent line on the internet. The spoof came off brilliantly, using a well-coordinated “feminist Facebook army” to hijack Victoria Secret’s social media and broadcast the a discussion of consent to millions of mainstream shoppers. Last week, I talked with FORCE organizers Rebecca Nagle and Hannah Brancato about what they learned from the Pink Loves Consent campaign, how Facebook and Twitter have censored their spoof, and the details on their next action, a Valentine’s Day protest that will install a temporary monument to rape survivors in Washington DC.

BITCH: What choices did you make while planning Pink Loves Consent that made it so wildly successful?

HANNAH BRANCATO:  The big decision was that we couldn’t sell the underwear. This is a spoof, we’re using Victoria’s Secret’s trademark, so we couldn’t legally sell anything. There was all of this intense energy around the project when it first launched but the only thing people could think of doing was buying the underwear.

REBECCA NAGLE: The first thing they asked was, ‘Where can I buy this?” And I think it was powerful to come back and say, “You can’t buy it, it’s an idea.” Instead of sending people to a checkout cart, we’re sending people to resources, to saying, “Here’s a zine you can make.”

How did you make the campaign go viral?

BRANCATO: We started out with the idea of doing the panty drop [placing screen printed “consent” undies at Victoria’s Secrets around the US]. We thought it would be so much more effective if there was already a buzz around it, so the panty drop actually became the last thing we did. The timing of the campaign was really important. We decided to launch the campaign right before the Victoria’s Secret fashion show. We thought people would maybe be looking for a way to cover the fashion show with a new angle, or consumers would be paying more attention to Victoria Secret’s social media because they’re looking for news about the show. Then we had a plan for how to make it go viral.

NAGLE: Our idea was to hijack the infrastructure they already had to promote their stuff. We tweeted about consent using their hashtags. They have almost 100 Twitter handles—one for each university where they have a  college rep—so we tweeted at them and they thought it was an official Pink thing, so they retweeted us. So that created a level of confusion.

BRANCATO: And the line seemed close enough to the truth to be possible.

NAGLE: One thing that worked well is the message was really positive, clear, and close to reality. People saw it and thought, “Oh, of course!”

BRANCATO: Everyone had the same experience of believing it, realizing it wasn’t real, and then being outraged that it was fake.

NAGLE:  The first stage of the feminist Facebook army was people posting on Victoria’s Secret’s Facebook saying things like, “Oh my god!! Can’t believe you’re doing this! Love the new line!” We had people tweeting with Victoria’s Secret’s hashtags and also our hashtags, so if people search for Victoria’s Secret, our tweets would show up in the feed. The day before the fashion show, we gave directions like, “Tweet at 11am, 3pm, and 8pm!” One of our biggest social media victories was that during the fashion show, we had people tweeting #ILoveConsent and when you looked up the Victoria’s Secret Twitter feed, #iloveconsent was trending right along their posts. Posts talking about how much people love their bodies was right in there with tweets from people feeling bad about their bodies as they watch the show.

BRANCATO:  It was really about numbers of people. So it’s a double-edged sword, because on the one hand you need social media, on the other hand, those companies will censor. Twitter has been great at helping revolutions around the world, but this is much less clear and it’s criticizing a company that they want money from. What we found is they’re less likely to support something close to home.

BRANCATO: Because we got so much attention, it would not have been in anyone’s best interest to prosecute. It would have given us more attention. But the whole time we were consulting with a lawyer about the line we were walking, like that if we’d been doing this to make money, we could have been sued.

NAGLE: What they did was a really typical response for corporations. Victoria’s Secret sent takedown notices to all the various companies that host our information online: Facebook, Twitter, Pintrest.

BRANCATO: The way we understand it is those sites are not obligated to take our stuff down, but they’ll do it if they’re pressured. They don’t want to injure their relationship with Victoria’s Secret. It’s an important thing to talk about because we’re moving to a place where so much information on the internet isn’t posted by individuals but by companies—Facebook, Twitter, Youtube. And these companies censor stuff. Both of our Facebook pages, you can’t search for them. If you type in Love Consent, they won’t come up.

NAGLE: The Love Consent Twitter account is suspended again, too. Part of our strategy was to get an army of people posting about it, writing on Twitter and Victoria Secret’s Facebook page about the line.

How did you keep your main site up?

NAGLE: We had a hosting account that was based here, but then it was taken down for a day, so we switched to a server in Iceland. There are certain servers less likely to give into that pressure we talked about. It’s all about finding a server that has a history of protecting free speech.

The response to this campaign has been overwhelmingly positive, but what criticisms of the spoof do you think are legitimate?

BRANCATO: The big one that’s legitimate and we need to acknowledge is that we specifically are using the strategy that “consent is sexy” and that if we’re talking about sex, it should be joyful. But a lot of people who feel critical have said, “Consent isn’t just sexy, it’s necessary.” And of course we agree.

NAGLE: It’s this argument of, “Why does feminism always need to be fuckable? You got all this attention because you’re using women’s bodies, using sex appeal.” I think what’s happened in feminism is sex has become this very polarizing position where both options are limiting. You have option A, where you’re an enlightened feminist that would never let yourself be objectified and option B, which is like being an ignorant bimbo with your tits out. And both those options are limiting! We’ve had people say, “If you really want to be taken seriously, you need to be in business suits, not your underwear.” And we’re like, ‘Whoa. Actually, I should be able to be in my underwear and be respected. The two shouldn’t be mutually exclusive.” It’s important for us to move beyond the point where our culture is stuck. I don’t think it’s just feminists who do this. When you look at images of women who are sexualized and smart, her sexuality is always the focus, her intelligence is diminished. If she’s supposed to be smart, her sexuality has to be confined in a pantsuit.

NAGLE: Yeah! So there’s this mainstream problem about how women are presented. We need to break those molds. For us, feminism is bigger than these one issue things. Feminism is the idea that people should have more personal freedom and equality. So if we’re setting new standards where we’re saying, “Women can’t dress this way, this way, and this way,” that’s not creating feminism.

BRANCATO: We wanted people who have no idea what consent is to talk about consent.

NAGLE: We really wanted consent to be a mainstream idea. As long as consent is a fringe concept that only feminists and anti-rape advocates are talking about, it’s not going to be effective in ending sexual violence and promoting female sexual empowerment.  I feel like the wall of “I don’t care” has been punctured. I feel like for a long time, discussion of these issues was behind a big wall of apathy. And now there’s a sincerity and need that’s coming forth that’s building momentum. We are media activists who do these things that have this blitz feel, but we’re also interested in building a movement. That’s slower and longer work.

So tell me about your Valentine’s Day campaign.

BRANCATO: This is the first in a series of temporary memorials we’re making for survivors, as part of a campaign to lobby for a permanent monument to be designed and made on the Washington Mall. We are carrying these letters, they’re eight feet tall, that say “I can’t forget what happened, but no one remembers.” It’s a statement by a survivor.  What we’re going to do is carry these to the Lincoln Memorial and hopefully float them on the reflecting pool and then use that image to raise attention for a memorial.

Why do we need a memorial for survivors of rape?

NAGLE: When you think about the psychological effects of trauma, there are individuals who experience trauma, but there are also communities that experience trauma—like a nation at war. The most common trauma for women is sexual violence and abuse and it’s experienced very privately. There’s not a lot of public mourning for women to work through their feelings. Being sexually violated breaks connection and trust in community and can further isolate people. When you look at the experience of veterans returning from war, our society recognizes that in some way. While we’re nowhere near perfect, we recognize and honor their loss at these public memorials. We honor the trauma they’ve gone through. This is a step in creating a society where survivors feel supported.

One of the things I love most about social media is the control and exposure it gives communities in pushing their message. I'm so glad these campaigners used social media in such a clever way to target Victoria's Secret's audience and others. So often messages get lost because people inadvertently end up preaching to the converted, or at least only reaching them.

It will be really interesting to see if and how this campaign impacts perspectives on consent, sexuality, etc. I hope it will at least open up a discourse.

Thanks for your campaigns!

you and the operation you executed are so awesome :) 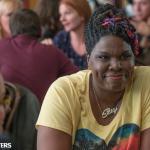