The Games We Play: Imagining How Girls Play | Bitch Media

The Games We Play: Imagining How Girls Play

When I was a wee sprite of a thing, I remember changing my idea of what I would be “when I grew up” frequently. I wanted to be a fisherman like my Papa and uncles at one point. I believe I spent some time thinking that being a firefighter sounded cool because the hose truck looked like fun. I had aspirations for several years to become an animator for a major studio, though looking back, hand-drawn cartoons and movies were long gone by the time I would have entered the field. I had an ulcer in my eye at sixteen and spent some serious time considering ophthalmology, should music not work out.

I am sure there may have been some time where I thought that baby-sitting or raising kittens might have been fun as a career choice. I still like kittens, really. I never, though, imagined that my choices were limited. It probably had to do with the strong influences around me who always said I could do anything I put my stubborn mind to. I think that young girls are influenced by the powers that surround them when they imagine what their future lives could entail.

As a fan of the Nintendo DS, a portable console that I think has been instrumental in getting younger girls interested in video games, I like seeing games that appeal to a broad audience. I myself have several games for the DS, a couple that are rather like Harvest Moon with a RPG twist, having fighting mini-games. My daughter has several of the Pokemon iterations, and more Harry Potter games than I can remember. One of her favorites is a game called Diner Dash, where the objective is to seat, feed, and keep customers happy in order to keep your restaurant flourishing.

The Imagine games, however, took the young girl DS game line to the next level, marketing stereotypical games with a driving force that screamed “These are just for you, girls, these are what you WANT!”. Ubisoft presented a line of games with a variety of jobs that girls can “imagine” themselves doing, such as wedding designer, superstar, or, yes, babysitter.

I want better for young girls and future woman gamers. Sure, design and give them games like Imagine: Fashion Party, but maybe give them some variety, like, Imagine: Police Officer, or Imagine: Architect. If you have them taking care of babies on one cartridge, let them design and plan cities with another. I hear Urban Planning is quite the career aspiration. Widen the horizons, and help spread the message that young girls have a future where their limits are becoming boundless and their opportunities are beginning to encompass what they can, well, imagine. Hell, give them Imagine: Video Game Designer, because we obviously need more women in this field with the sense to make decent games.

Ubisoft had, and still has, an opportunity here to speak to young girls, to show them that their worth is beyond their ability to soothe a toddler and look pretty. The Imagine line, in my mind, is falling short and missing this chance for a reaching out moment. All they’ve managed to do, again, is repeat old messages of limiting gendered roles.

Who is to say, also, that despite the aggressive “girls only” marketing that young boys wouldn’t like–or aren’t already playing–some of these titles? Perhaps there are young boys out there who genuinely would like to learn to maintain his A-list celebrity status, or play at being an animal doctor. Or even be a babysitter. The problem with this targeted, segregationist, marketing is that it has been excluding girl gamers for years, and is drawing more unnecessary gender lines where none need exist.

I am not against games that get young girls interested gaming. More girls and young women gaming could mean that more women tackle the gaming industry in years coming. I am, however, angry when I see them brushed to the side and presumed to not be important enough to present with proper variety or good games. My younger self wants to know where the firefighter game is.

I don't often go into the video game store, even though I'm an avid gamer. I went in when my friend was picking up a game she'd pre-ordered, and took a look around. I was appalled that there was an entire row of a wall display hyping these games. At 41, I was a child during the 70s women's movement as well as the 80s backlash. To see this stuff still around makes me want to barf.

The Sims 2 Pets (for DS) has a veterinary aspect to it. People drop off their pets and you have to diagnose them and then fix them up or give them a groom job. You can design a male or female avatar. I played it a few times, it's pretty fun. I could see a lot of boys and girls liking it.

You used the word "segregationist" and I couldn't agree more. What you're describing (and I will take your word for it, being a young childless adult without much of a grasp on children's marketing) sounds like the old "separate but equal" solution, with people divided by type and expected to be okay with it, while upholding and perpetuating stereotypes. It also kind of reminds me of Peggy Orenstein's "Cinderella Ate My Daughter," about girl culture and her daughter. Personally, I think that until people are willing to let go of archaic gender/sex stereotyping, toys "for girls" and "for boys," rather than "for kids" will continue to dominate the market.

For an "Imagine: Video Game Designer" type game, I would recommend the RPG Maker series. I don't know if there are any recent iterations of that series, but I think you can scour Amazon or a used game store for the Playstation version.

When I was very small, I had a firefighter game on the family computer. You would drive the fire truck through a maze to get to the burning house, and every level the maze would become more complicated. ...Thanks for reminding me of that game!

I've been loving this series, as a lifelong video game player.

I remember one firefighter game... sort of. It's really old, had those bouncing babies that'd come falling out of a burning building and you had to catch them with... one of those trampoline-like things, and then catch them again as they bounced. This was also one of the few games that my father played. (He also likes: tetris, bubble shooter, wii golf).

I know all the The Sims games are considered to be 'for girls' (though I'm not sure what the marketing is like: we just don't see much game marketing here), and a lot of boys and men play them anyway. But it's considered to be kind of embarrassing to admit to it, or when someone discovers it.

When I was really little (like 4) I wanted to be a doctor (my aunt was a doctor), then I wanted to be a writer and illustrator. When I figured out I can't draw for **** I reduced it to just writer and a bit later added interpreter. During my teens I also briefly considered "something with history", but went on to study English and specialise in translation. Worked as a translator for a while, found out I might like editing and proofreading even more. Now I'm doing linguistics, but I kind of also want to do something official with building computers instead of just hobbying. I always kept 'writer' through all of it though. Although by now it's more of a 'how to get published' thing than an idea of 'being a writer when I grow up'.
I always knew babysitting was... not for me. Even so I once asked my mom if she thought it would be a good idea if I tried to get a babysitting job, as a good experience to have for later, the answer was something like "No. Noooooo." :D

I hear from family in that field that aerospace engineering is in dire need of more women in the field. Perhaps they could do an imagine game for that.

Oh, goodness, I remember that game! Ha! Thanks for reminding me!

Unfortunately I don't have the reference with me, but for my game design class we read a couple of articles about women gamers and the types of games girls like. If I recall correctly, the findings were as follows:
-girls like challenging games, games that make you think
-girls don't like games that kill you a lot/make you start over much earlier as much as boys do, though some are certainly into it. Many preferred to be able to backtrack and try again.
-fewer girls than boys get deeply into games that are all about racking up a high score
-'girly' symbols and colors (unicorns or pink or what have you) did not noticeably increase the appeal of a game to girls, and few girls would add them if offered the chance to change aspects of an existing game

The research was done by a game studio that wanted to make appealing games for girls (and not just cutesy games that might appeal to their parents), not by psychologists or anything, and the sample size was smallish. The people running the studio were mostly female gamers who were sick of seeing only cutesy princess games aimed at girls.

Still and all, the results are interesting. I wish I knew what the article was called! 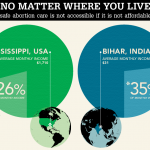 by Sarita Santoshini
By constantly focusing on sex-selective abortions and being careless with language and imagery, Indian media has reinforced existing stigma around abortion in general.