My name is Dylan Ryan, a name I coined from my early years of sex work, working as a stripper at The Lusty Lady in San Francisco. I wanted a somewhat androgynous name so I chose from various rockstar last names, hence Dylan. I got into sex work through a combination of volunteering and then eventually working for an organization called The St. James Infirmary and working at a sex toy retailer and sex-education hotspot called Good Vibrations. I was 22 and found myself inundated by sex and sexuality, much to my own choosing, and it was exciting and inspirational. I was also in a fairly sexless relationship which provided a challenging juxtaposition to all the sex around me so I decided to start stripping to help with my flagging ego and lack of sexual validation in my personal life.

People getting behind the camera and showing the world what their sex looks like is a direct way to try and not only represent themselves but demystify both queer sex and sex work. People making choices to engage in taboo and socially “deviant” choices from a place of empowerment and a desire to be seen is really powerful. I think we need more of that if we are to see a broadening of these particular horizons.

Previously:  “Cleaning Up” OWS and Our Country’s Historic Fear of Contagion, Essence, Revealed

Dylan Ryan, you are the most badass. Thanks for this freaking awesome, affirming, article! 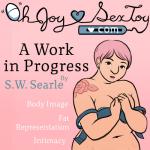