The Body Electric: The Higher the Hair the Closer to God--Halloween Queers Us All! | Bitch Media

The Body Electric: The Higher the Hair the Closer to God--Halloween Queers Us All! 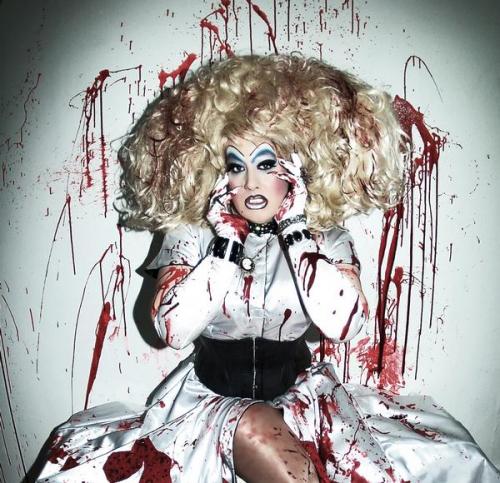 Peaches Christ (pictured) is probably one of the most famous drag queens on the planet. I'm thinking about Peaches--and a lot of other spectacular queens--today because she regularly deals in the sort of campy, performative drag that blossoms in cities across America--on the straightest of straight men as well as the campiest of queers---on one night only. What, dear reader, am I talking about? You've guessed it: Halloween!

Halloween, for some, conjures up images of sticky-faced children seeking chocolate in a kind of menacing way (they frighten me a little); or the impulse to make even the most mundane costumes "sexy" (as in sexy mechanic, sexy lawyer, sexy baseball fan, etc. and so on an on and on) but I, for one, think of Halloween as that magical time where bros shave their chests and legs, slip on wigs and heels, and hit the town.

Why does this happen? Granted, I live in San Francisco where anything is possible in this arena, but I remember being just as impressed by the Boston University frat guys when I lived on that side of the country. You haven't seen anything until you've seen a herd of duders in drag.

Some might argue that the costumes are sexist--on the "bro's up" vaguely-women-hating tip. I can see that, but you can't deny that drag is gay. In fact drag, by its nature, is a critique of gender performance. It is a comment on the way binary thought about what makes us "men" and "women" is absurd. Drag is camp, drag is fun, drag is embodying stereotypes and then amping them up to such a degree that they explode a little. It is a guerilla assault on a system that oppresses everyone in its rigidity.

My theory is that bros love drag because it gets at some sort of unconscious truth. Maybe its deeply buried, but once a year they can put on some makeup, look in the mirror and experience a flicker--if only for a moment--of, "What the hell is this all about, anyway?"

This is my theory, and its one that makes me feel all warm and fuzzy about the state of things, so I'm hesitant to put it up for a vote. But I can't help myself, so I'm asking you. What do you think about the Halloween drag effect? Frightening, festive, or unwitting cultural criticism? Happy Halloween!

Aw, I wish I agreed, but I've seen too many straight guys pretending to be "gay for" their mates in that nudge-nudge-wink-wink-I-can-only-say-these-suggestive-things-to-you-because-I'm-soooooo-damn-straight way, that I can't see much in the way of critique just cuz a bunch of 'em go putting on women's clothes. I see them enjoying *something* absurd about the performance of gender here, but I strongly suspect what's sticking out as entertainingly absurd to them is not their own performance of masculinity, but the horrendously funny idea of them getting into the gear of the opposite gender when they identify so strongly with the very other end of the spectrum. To the extent that putting on a frock seems ridiculous to them, I reckon it just serves more strongly to bind them in identification with the gender they feel more comfortable performing.

although your comments are ideal, Page, i'm going to have to agree more with Rebecca, just from what i've seen in my own experiences. If a guy is dressing up as a woman, he alwyas has to be "ooh la la" hitting on their buddies, talking with lisps, being complete morons, mocking drag queens. Or even in some scenerios, take the completely wrong idea of what it means to be a girl- as if, by just slipping on a dress and heels they now know absolutely everything about us. Inflating their balloon breasts because they're not big enough, complaining that the heels are hard to walk in, that their eyeshadow is itching. I mean, its not even like every girl wears makeup and dresses and heels, or have giant balloon breasts for that matter. But those that do suck it up and deal with it, but by complaining about the discomfort- the guys are showing how manly they are in some twisted way, you know? That by complaining and whining about something hurting or being uncomftorable, they are proving and making a show that this is something they would never do, and are therefore, manly
I'm sorry if this is confusing to read-it's confusing to write- my brain is in dissaray. It's just, I can't help but always feel just a little bit insulted when i see the guys i do see in drag. I've never seen it from your point of view before, the breaking gender stereotypes by emphasising them, and i really admire that. But i also know that perspective is way beyond any of the highschool redneck boys I'm surrounded by each day. Whats weird, is that, for rednecks, they act kind of superior for not being racist, even though their parents are, but gay bashing is in complete full throttle in my school and it's driving me insane. That seemed related to this post somehow, i think i was just thinking of my school and gay issues within it while reading your post, and i responded to it in a way that was way off topic.
But, good article nonetheless, i'm emailing it to a friend :)

I've been mulling over this post since yesterday when it went up and I'm still no closer to an answer about what the deal is with duders dressing like women for Halloween. I've definitely seen it from a few angles, from the drunken mockery of frat guys who are "SO straight and masculine" it's just absurd humor, to some guys who actually seemed to enjoy the change for a night, to guys who have gone as one of their female friends (and vice versa).
What I find interesting, more than the reasons behind why the guys might be trying on a different form of gender performance (intention or no, that IS what they're doing), is the way in which it actually makes gender presentation on BOTH ends of the spectrum seem absolutely ridiculous. This is not to say that there is inherently anything wrong with these presentations, just that it makes it clear how much we're all wearing theatrical costumes so much of the time.
Like it or not, wasted duders have, Halloween after Halloween, 100% turned hetero-normativity on its head, making it seem just as absurd as any professional drag queen does.
So I say, thank you frat guys across the US. Thank you for making both hyper-masculinity AND hyper-femininity seem like a romp through a fever dream. You have given me that, at least.

I've spent a fair amount of time around crossdresser, he/she, chick-on-a-stick, and find the mockery of women to be distasteful. I've often heard them say, "I'm better than a woman." They will spend hours playing in makeup and heels. And I have found that they are not nurturing, this is one of real woman's best quality.

The spirit of the dudebros dressing up isn't to enjoy playing with gender, but because OMGSOCRAZY to dress up as a woman. Just like people dress up as axe murderers and convicts (as well as a list of other "undesireable" things to be), Halloween for dudebros and other similarly minded people is about dressing up as the LAST thing you'd ever want to be in real life. And for dudebros, the last thing they'd ever want to be is either a man in drag or a woman.

Think about the converse, how many heterosexual cisgender women do you see dressing up in drag on Halloween? Generally no where near the same numbers.

i agree and disagree. i think halloween does send up gender in important, potentially expandable ways. in this sense--sorry to cash in on my russian lit cache--it's a bakhtinian carnival. true, carnival inverts established hierarchies and norms, but only temporarily. in fact, carnival lets us let off the steam built up by such rigid systems, only so that we can return to them with renewed vigor once the holiday ends. all this said, i don't think we should give up the glimmer of gender utopia that halloween lets us glimpse. we should just think about how to make it last longer than a day.

Yes! That's it! The inversion of hierarchies, whether intentional or not, breeds enough dissonance to glimpse the way in which nothing is inherent.

As for the "chick-on-a-stick" comment, I think you mean "chick-with-a-stick" and I really wish I wasn't reading either one of those derogatory terms on a feminist site. And "he/she??" I can't even begin to address the disturbing connotations that begs. Being threatened by people skilled in performing the artifice of gender is another form of dissonance. It might be more productive to explore the vitriolic inner response than to spew hate speech.

I know it's not respectful or PC, but most of what comes out of the BU Frat Boy Type's mouth sounds like bullshit to me. How many times have you overheard conversations between these hypermasculine, hat-wearing, half-drunk college kids that bore you to tears? I hear it a lot, and what's more - they sound bored, too. And it's because what two hypermasculine guys can safely talk about is so limited. Caring is restricted to two or three issues (and I really am stereotyping here): sports, booze, and how she looks. Beyond that and you're running the risk of coming off faggy. So despite that these guys who dress up as girls do so, they say, or imply, to mock the ridiculousness that is women's dress, womanhood - I choose to believe it's a desperate bid for freedom the one day of the year they can get away with it.

If a guy is dressing up as a woman, he alwyas has to be "ooh la la" hitting on their buddies, talking with lisps, being complete morons, mocking drag queens. Or even in some scenerios, take the completely wrong idea of what it means to be a girl- as if, by just slipping on a dress and heels they now know absolutely everything about us. Inflating their balloon breasts because they're not big enough, complaining that the heels are hard to walk in, that their eyeshadow is itching. I mean, its not even like every girl wears makeup and dresses and heels, or have giant balloon breasts for that matter.