The Lady Is a Tramp: What isn | Bitch Media

The Lady Is a Tramp: What isn 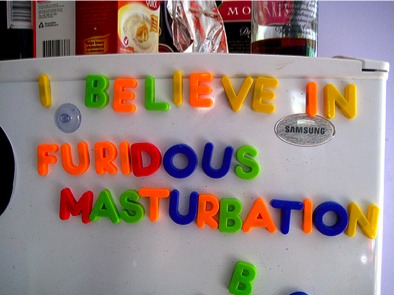 [I]t’s okay to sometimes view it as a crotch maintenance & find it satisfying, whole, but not necessarily empowering.

That people with disabilities do it too!

[A] deep discussion of penetration. [S]eriously.

I can’t say that I’ve really seen many identified feminist convos about jilling off. [C]an only say in general I would say that one thing missing in a lot of convos is basic anatomy and how to’s.

A couple of people to whom I reached out on Facebook echoed PostmodSexgeek’s response regarding the feminism’s general silence about this, be it in print or online. Cat Mungcal said the only times she read about it were “A Love Letter from an Anti-Rape Activist to Her Feminist Sex Toy Store” by Lee Jacobs Riggs in the anthology Yes, Means Yes and my old (and soon-to-be revived, I swear!) blog, The Cruel Secretary.

Mandy Van Deven had this answer–

Maegan La Mala Ortiz had this to say–

Hmmm….I could see Samhita’s point. Here’s what two other women of color said regarding it:

Sexologist Bianca Laureano looked at the question this way—

Thanks to everyone who was gracious enough to respond to my question!

Thanks Andrea! You have amazing Facebook friends by the way.

I've been kinda thinking about this recently, and since you've invited us to discuss via the anonymous platform of the internet, and since no one's commented yet, why not, I'll divulge in full. I was in a manipulative relationship with a man who was 8 years older than me from the ages of 17 - almost 22, in which we had basically the most extreme heteronormative chauvinist pornographic kind of sexist sex. While my own feminist education and understanding of kyriarchy has helped me get myself back in so many ways-- I'm even in a healthy, happy partnership now-- I still find that whenever I masturbate I still gravitate towards thoughts of that degrading kind of sex... then I feel guilty about being a "bad feminist," even though I know that's a silly concept. Mandy and Bianca both touched on this in their comments, especially when Bianca talks about "disassociating the pleasure from the theories on oppression." I wonder if other feminists have experienced this, or how they've navigated themselves through it, or to what extent all of us have to untangle the oppression out of our personal sexual kinks.

I have been preaching in this vein for years! I mean, I don't necessarily know if I'd expect many mothers to buy vibrators for their daughters (props to yorus for being that comfortable), but they should be teaching their daughters that sex should never be shaming, or disgusting, and often is is enjoyed alone and that's great too. Anatomy lessons are necessary- women do not have the benefit of external organs on display to learn- which makes them seem secretive from day one. Never do we want teenage girls feeling as if their pleasure is at the whim or control of a man, thought here is nothing wrong with that either. Put women in charge of their goods. The novel Cunt address this in part.

Concerning the lack of conversation, though...while it's obviously still a conversational taboo in most circles, I think the reason that the feminist convos don't tend to go further than, "We do it! Yay!" is that masturbation isn't easy, or sometimes appealing, to analyze. Sexual fantasies tap into the id to an extent that stream-of-consciousness often doesn't, and the images or scenarios that appear may not be as crafted and self-revealing as a scene in a movie or book. We don't necessarily want to actualize everything we envision, a lot of it might not even make sense, and what's in our minds isn't always indicative of who we are as sexual beings. On a more physical level, what works in private may be totally different from what we'd bring into a partnered situation. I hope that makes sense...

From an older woman, here:

1. Enjoy yourself.
2. Sexual pleasure doesn't always have to have a meaning or a reason or make sense.
3. Fantasies don't have to be things you would ever want to try in real life. The content of the fantasy doesn't "say" something about you or your morals/ethics/status as a feminist.
4. Politics (including racial/gender politics) and sex don't *have* to be lumped together. Sometimes they are connected, sometimes they aren't.
5. Your clit knows what it wants. Maybe it doesn't. Listen to it, treat it nicely and it will tell you.
6. Just because lots of other people out there may have some conception of how you should be or what you should feel or respond to something doesn't mean you have to be that way, feel that way, or respond that way. It's bad enough others try to dictate our public lives. Do we have to let them dictate our personal playtime, too? Sheesh.
7. Honestly, even as feminists, we spend way too much time obsessing deciphering the coding and not enough time getting off.
7. Sometimes, I don't care - it's just hot. No, that doesn't mean I've internalized the oppression, I just happen to have a great opportunity and the inclination to get off, and would rather take advantage of it now and kick some ass later.

I like the term "fap" because it's funny. Yes, it's straight cisgender male framing, but it's a funny word and the first time I heard someone say, "fap fap fap" I laughed so hard. Female identified folks definitely need something as catchy and funny. nothing too wordy though.

"Buffin' the muffin" is a good one. (Wish I'd made it up, but I don't know its origins.) There's always "double-clicking the mouse," which feels a bit dry or clinical, but cracks me up with its image of a computer window opening at the moment of orgasm.

(because I'd feel weird publicly identifying myself in relation to this, and I shouldn't have to feel that way!)

I don't know how to have an orgasm, and, like Bianco Laureano says, it's an issue that people persist with the assumption that orgasm is the end result of masturbation. I think there is more acknowledgement nowadays that sex - especially heteronormative sex - isn't going to guarantee female orgasm, but there's still the assumption that if you can't have an orgasm with your partner, you at least know how to climax by yourself. Well, I don't. And not for lack of trying! I experience sexual pleasure, anyway, and I know that it's counterproductive to focus on it as a goal - it's definitely not going to happen for me that way. But I would appreciate not being made to feel like the only freak in the room when people make those offhand comments as if everybody experiences it the same way.

I also do not orgasm. That does not mean I do not have fun- and trust me, I have lots of fun. But I have to agree that it feels demeaning and narowmined to have people assume that sexual experiences end in orgasm and that if you do not orgasm that it is bad/unproductive because you or your partner failed to bring pleasure. That's simply not true! Pleashure, just like sex, gender and orintation, is on a spectrum. I love sex, solo, parallel or partnered. Nether my partners or myself have done anything wrong because I lack orgasm.

I like and agree with much of what was said. However, to be honest, I don't necessarily think that the treatment of white v.s POC female sexuality is really so vastly different. I mean, as a person of color I am ever vigilant to differing attitudes and treatment in regards to the subtext of race in identity politics. It's just, i don't think that in contemporary society there is a great divide in feminist discourse when it comes to realizing and accepting our bodies and desires, to me its a universal issue that is addressed in all communities. To say that the issue of addressing sex positive attitudes with young women in order to foster healthy relationships to sex and the body is an issue specific to POC denies the larger picture, which is that this is still very much an issue for all women regardless of race or ethnicity. That's just my thought.

Part of what Bianca Laureano said strikes with me.

Children do it as soon as they figure out that it feels good to stick their hands in their diapers, and often times parents react with mortification instead of understanding and a quick discussion about modesty (such as where and when is appropriate to enjoy yourself). Instead of giving first lessons in sex ed when they arise so many parents miss the opportunity altogether. So, I think that parents, especially parents of young children, are missing from the conversation. Adults are not the only ones who have figured out how to get themselves off (albeit for different reasons), but this creates a unique opportunity to open doors for discussions on sexual education as children grow older.

<a href="http://randombabble.com/2009/09/02/talking-to-kids-about-sex/">People don't talk to children about sex enough</a>. Any form of it. There is age appropriate sex ed talk that can happen starting when kids begin playing with themselves.

What about if fantasies <i>do</i> play into a sexist outlook? I like to be controlled in the bedroom and a least half of my fantasy life is about that, is focused on being under someone else's control and as I identify as straight-leaning on the Kinsey scale, most (not all, but most) of these fantasies involve being controlled by a man. I think discussion of this kind of alternative preference seems to be missing; am I still feminist if I enjoy this kind of alternative sexual lifestyle, if giving up control plays a serious role in my fantasies?

Forgive me if this has, in fact, been discussed to death elsewhere; I didn't see anything else in the comments about it and I'm new to feminist thinking.

Welcome to the feminist community, Isidore! I think (and I think many would agree) that yes, you ARE still feminist if you're submissive sexually, including in a male/female context. Consent is key, so as long you've communicated your desire to your partners, along with any limits it might have, your loss of control is healthily orchestrated and you still have your autonomy in its set-up. As for fantasies, they are completely up to your own mind, and direction is totally yours; there's no such thing as a "wrong" one. I don't have many references to offer on the subject, but I know that the book <i>Yes Means Yes</i>, edited by Jessica Valenti and Jaclyn Friedman, has an essay related to this topic by Stacey May Fowles.
Hope this helps!