The Long Goodbye: Oprah and Franzen Fake it | Bitch Media

The Long Goodbye: Oprah and Franzen Fake it 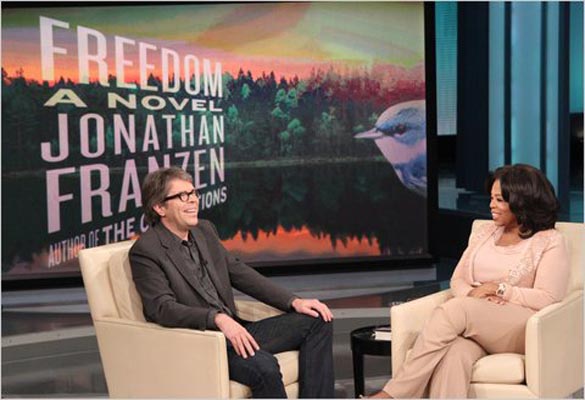 Earlier this month, celebrated author Jonathan Franzen finally graced The Oprah Winfrey Show stage, an appearance roughly nine years in the making. Some of you may recall the press that surrounded Winfrey's book club selection of Frazen's novel The Corrections in late 2001. Post-selection, Franzen expressed some discomfort with having a corporate "Oprah Book Club" logo attached to his creation. Oprah, stating she didn't want to make anyone uncomfortable as the reason, canceled Franzen's appearance on her show to promote the selection. It didn't hurt The Corrections sales, but it did blemish the author's personal reputation for a period.

In September of this year, Oprah chose Franzen's new novel, Freedom, as December's book club selection. On December 6, he met Winfrey on the stage. Oprah introduced the segment saying, "…Jonathan Franzen…someone I've been waiting a long time to finally meet." Oprah barely suppresses an eye roll and the audience laughs. "Don't start with me people!" 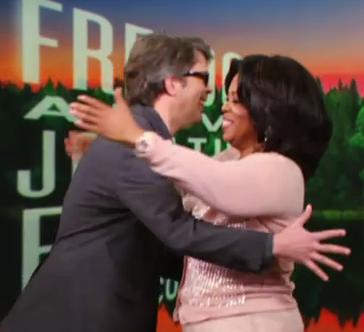 Franzen arrives, barely suppressing an eye roll of his own and walks straight into Oprah's arms for an awkward embrace and seemingly obligatory exchanges of "it's an honor to be with you!"

They talk a bit about Freedom, but this is The Oprah Winfrey Show, so you know what comes next: Oprah integrates herself into the story. "We have a little history together," she begins. "You voiced some concerns, and as I remember it, and I didn't want to make you feel uncomfortable. It still was and remains a book club selection, but I said 'well if you were uncomfortable then we will not have that book club dinner.' And I had to read the press clippings to remember what happened. What do you remember?"

"Well," Frazen responds, "It's a long time ago, so one can be forgiven for forgetting. One can be encouraged to forget. I spoke in long sentence and then little pieces sounded bad and your feelings were probably understandably hurt and next thing we knew it had become this 'thing.' And I think it was a probably a good decision to let things cool down."  Oprah nods in agreement.

They discuss this a little further and then move on to the explore the huge media spotlight on Freedom and its author, and Franzen's writing process in general. There is very little discussion about the book itself on the show (viewers are encouraged to go to Oprah.com for that).

OK, there are three things happening here that strike me.  The first is the issue of memory recall.  When Oprah and Franzen evoke what occurred between them nine years ago, they acknowledge that memories can be sometimes be murky.  It's hard for me not to think of James Frey and the hysteria that surrounded his book A Million Little Pieces (AMLP) when it was determined that some parts of the story were greatly embellished.  Post discovery, Oprah invited Frey and and publishing giant Nan Talese on the show to discuss the scandal and "truth."  And almost all agree—including the three people on the stage that day—that it was nobody's finest moment.  However you feel about what went down, the irony here—Oprah recognizing that impressions can sometimes unintentionally transition into "facts"—is not lost on me.

Second, and perhaps most obvious to those reading this series: Oprah has to be part of the story.  And her audience members eat it up, which makes me wonder what came first: Oprah's need to be front and center, or the viewers/fans fervor for all things O.

And finally...When did the book club episodes stop focusing on the books themselves? Oprah used to engage people in stories by reading portions from the books she was promoting (note: viewed starting at time code 1:33).  When did that change?  And through the course of that change was something lost?  Is it simply a case of fait accompli?  Oprah's selecting a book translates into serious sales no matter what so why put the effort in?

Post-show, The Wall Street Journal caught up with Franzen at an event and asks if he had "fun" on the show.  "I don't think fun is the right word," Franzen responded. "It was work. There were no disasters."  Referring to Winfrey: "I think I like her more than she likes me."

It's a strange comment, and one that implies that being "liked" by Oprah is really the the ultimate measure of "success."

I also thought it was hilarious when Franzen and Oprah talked about (something like) how one of the themes of his book was freedom from the need for so many possessions and they chatted about how we are too materialistic in this world and Oprah has realized that "things" are not what's important and meaningful. And then 5 minutes later she gave Kindles to her audience and launched into another one of those montages of audience members going cuh-razy over free stuff. And I'm going <i>cut to Franzen, please, please, cut to Franzen for his reaction to the sobbing and speaking in tongues going on around him</i> but, you know, they didn't.

Ha! Yes! That was pretty choice.

I'm sure that Franzen must have been humbled to be in the presence of such a renown literary critic ..... not.

correct me if I'm wrong, but isn't this HER show??

And what's wrong with giving out gifts? If she had given away copies of the book, would it have been such a big deal? Why is a kindle ( with which to read books) any different?

I think the point Rebecca was making was the irony inherent in Oprah participating in a discussion about how the accumulation of material items seems to have a negative correlation with happiness, and then turns around and gifts the audience with what some would agree is a pretty materialistic item (as compared with giving the audience the actual books, perhaps).

Don't get me wrong, I'd be happy to get a free Kindle. My point was that the Oprah fan reactions are pretty extreme, in my opinion. Like they found out their cancer was cured, not that they got a really nice gift. [That is, the fan reactions that they SHOW in those montages - those with tears streaming down their faces and jumping up and down. I'm sure some audience members just smile broadly and say to their neighbor, "Wow, that's pretty awesome." But they don't make the montage.]