The Long Goodbye: Michelle Rhee Gets the Winfrey Endorsement

This series would be incomplete if we didn't discuss the show. And the December 6 episode of The Oprah Winfrey Show had former Washington, D.C. Schools Chancellor, Michelle Rhee taking to the stage. Rhee was on to promote her new organization Students First, which she says is intended to start a revolution in this country on behalf of the nation's children. Michelle Rhee elicits strong opinions, and the point of this post is not to analyze them here. This is about Oprah. She'd want it that way.

What bothered me about the segment was this: If the show were really interested in education reform, as Oprah claimed, the people behind it would have invited other stakeholders to share their perspective on the challenges and successes in current reform efforts: students, teachers, unions, parents, politicians, school administrators and other reform leaders. Again, as of late, when Oprah has the opportunity to facilitate a meaningful conversation around a complicated topic, she appears to squelch it in favor of presenting a narrow, simplified view. And due to Rhee's popularity in the press, and this year's release of Waiting for Superman, her name has become synonymous with education reform. Slate reminds us that the mission of Winfrey's new network is "to entertain, inform and inspire people to live their best lives."  Perhaps with that in mind, Winfrey views Rhee as the manifestation of that mission: dream big, lead and be your best self!  Whatever it is, Oprah presents Rhee as the person to get behind without bringing other perspectives into play. 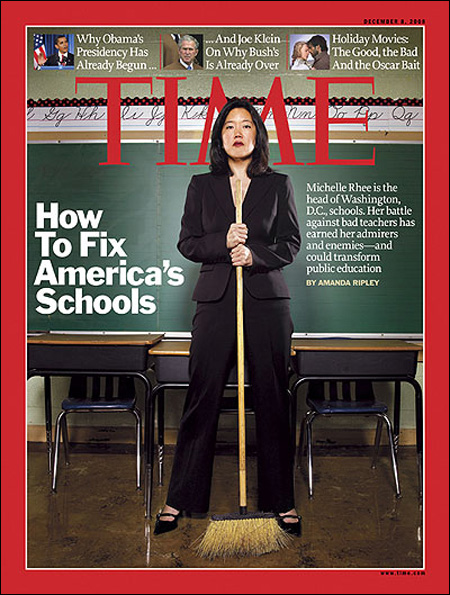 First Oprah presents the issue according to Rhee. "You think the problem is teachers who do not work." Rhee agrees. "You all know I love teachers," Oprah continues, "I consider myself to be one with this platform everyday. Really good teachers also want really good teachers…we're talking about good teachers, so don't waste your time writing me if you're a great teacher. And if you're a bad one, I don't want to hear from you. Right?"

Before bringing it home for the big endorsement. "This is a seminal moment for us, where the citizens of this country choose to be an educated country…we're either going to fall further behind or choose to move forward. It's really in our hands and I believe that Michelle Rhee is one of the people who can turn this dire situation around. She cannot do it alone (cut to Rhee nodding), that's why she's asking for a million people to join her. Get yourself fired up…let's stop complaining about it, log in and DO SOMETHING. Thank you Michelle, I'm rooting for you!" And then huge hug and cut to commercial.

In this era of data overload, people want someone to break it down for them. Oprah has the power, influence—and, yes I believe responsibility - to present certain issues as the multi-faceted, complex topics they are.

Thank you for bringing up this episode. I felt my face turn red as I was watching this episode. "Doing something" amounts to logging into a website. I've really hated how Oprah tackled the issue in her two-part episode as well. She took the side of the Waiting for Superman film with a very narrow view point. The film, and Oprah, barely mention or recognize that education reform isn't just about (overworked,underpaid) teachers but PARENTS and PARENTS getting involved and being aware of what their kids are learning. It is not brought up that some teachers are told to teach this from this book and get these kids through your class. Oprah instead chose to spend two episodes praising charter schools and denouncing bad teachers. What I found most infuriating was that in the 2nd part of the series, she showed some of the reactions of the teachers who messaged her. She showed a video of a young teacher complaining about how teachers were represented in the 1st part, and then Oprah followed that clip with a clip of an older teacher stating "The ones who are complaining are the bad teachers"

Overall, this is why I don't like Oprah. She covers topics very narrowly, and expects her viewership to follow and swallow every thing she says.

is an expose by someone, anyone on Oprah's disdain for unions, made quite obvious here. The good-hearted residents of DC had had enough of Rhee and are still cheering her departure from the DC school system. The reality is that working parents that are working because they MUST WORK to support their families HAVE NO TIME to spend being involved with their children's education. This pro-parent stance made clear on the show is problematic and unrealistic. While I can agree that good teachers are necessary, it takes longtime experience to become a good teacher. That's what unions are for, to encourage anyone whose heart is in the place of wanting to become a good teacher, to have the access and support that is needed to become one free of corporate bureaucratic involvement. Rhee is part of a conspiracy to overthrow all of them and Oprah is preaching to that choir.

Ha! I didn't watch the show but when reading this I can actually hear her in my head. You are dead on with your reviews of her various shows. Keep up the good work. I almost don't want the long goodbye to end so I can keep reading your commentary. (almost)