The Many, Many Failures of "Hot Pursuit" | Bitch Media

The Many, Many Failures of “Hot Pursuit” 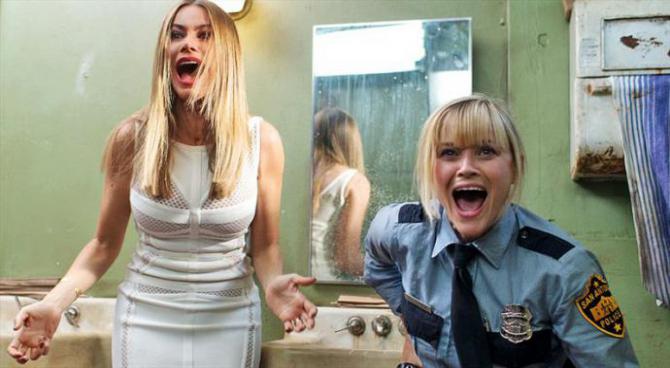 Sofia Vergara and Reese Witherspoon should be screaming, “Why are we in this terrible movie?!”

Hot Pursuit clocks its first transphobic joke within five minutes of the opening credits. With two female leads—Sofia Vergara and Reese Witherspoon—and Anne Fletcher directing, cop comedy Hot Pursuit might seem at a glance like a girl power film. But David Feeney and John Quaintance wrote the script and humor at the expense of women threads throughout the film, whether it’s homophobic jokes about queer women, crude body humor, or snide swipes at the trans community.

Like most critics, I found Hot Pursuit interminably painful. It’s not just the gaping plot holes and poor cinematic construction of the action comedy—it’s the execution of a film that so clearly doesn’t know what it wants to be, while so obviously being written for the male gaze. On the surface it was presented as a witty lady cop/inadvertent sidekick comedy, but what it felt like was a misogynistic kidney punch. As a film clearly marketed to appeal to women, Hot Pursuit instead comes across as more insulting than anything else: This is what Hollywood thinks of women and it wants women who buy movie tickets, one of the largest spending demographics, to know it.

Rose Cooper (Witherspoon) is the police officer who wants to be just like her dad, but got stuck in the evidence department after an unfortunate incident on duty. Daniella Riva (Vergara) is the wife of the man tangled up in a drug cartel who’s agreed to testify against his employer—and she becomes a woman Cooper is sworn to protect. Hijinks predictably ensue when a shootout takes out Mr. Riva and the two women are forced to go on the run from cartel killers and crooked cops.

From the start, Hot Pursuit’s plot is painfully obvious: Trust me when I say that it’s not a spoiler to mention that of course there is a crooked cop at the top of the department and of course Riva is plotting to kill the drug lord herself—because he killed her brother and she wants revenge. Naturally, Cooper falls in with a lovable felon along the way, and eventually loosens up those dress blues and embraces life. Of course everyone lives happier ever after, complete with Orange is the New Black references.

From a purely aesthetic perspective, Hot Pursuit is a terrible movie, a pity, considering the talents of the costars, who were obviously phoning it in for a paycheck. While some of the handful of people in the theater might have been laughing, it sounded like uncomfortable, despairing laughter as the film sank into its worse moments. The fact that everyone in the theater fled as soon as the credits started rolling—despite the tantalizing prospect of a blooper reel—was a bad sign. 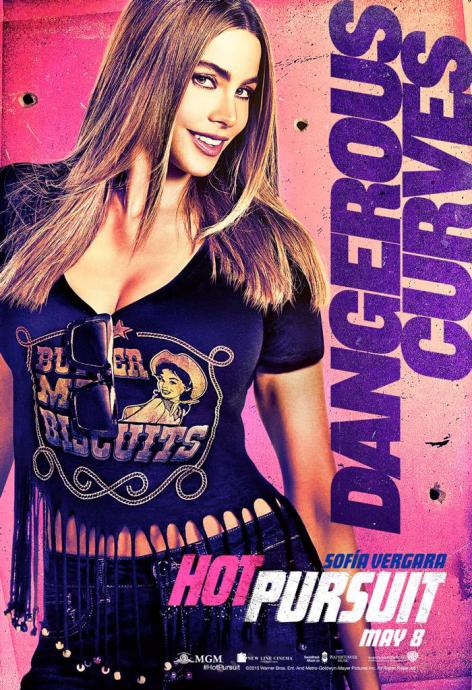 One of the big parts of the film that feels uncomfortable is Vergara’s role. She’s once again typecast as the “spicy Latina,” thrown into an assortment of outfits that shove her breasts into the center of lingering camera shots. She tottered across the screen in an veritable smorgasbord of impractical shoes, impressing audiences with her seemingly shallow personality—because attractive women don’t need to be intelligent, nor is there any chance they might be. While she threw in a few withering comments about Latina stereotypes, perhaps designed to offset the fact that her character was a stereotype herself, they fell flat.

Witherspoon, meanwhile, was wedged into unflattering clothes designed to make her contrast as dramatically with Vergara as possible—a flat, stocky body to Vergara’s sky-high curves. She spoke in a deep Texan twang to counter Vergara’s sultry Spanish accent, and moved across the screen like a windup toy, mimicking the uptight, rules-oriented character she was supposed to be playing. Both roles were deeply unfunny. Constrained by the script and the costume design, neither actress was allowed to be a full, rounded character, as the film was too busy flinging joke after joke at the wall in the hopes of making it stick. None of them did, and some slid off with a resounding and unpleasant plop, leaving an unsavory smear along the way.

It’s not just the trans joke at the beginning of the film, or the racism, that’s cringe-inducing. We also see multiple jokes playing on Cooper’s small, masculine frame—the peak moment, of course, is when she pretends to make out with Mrs. Riva in the line of duty for the viewing pleasure of a hick with a gun. Then we have a bathroom scene featuring Cooper and Riva discussing the placement of a wire and one of the most painful scenes of the movie, in which the two women conspire to escape a pair of crooked cops by faking the need for menstrual supplies. The scene is played up for laughs—look at the terror men have of menstruation!—but instead just reinforces the popular notion that periods are gross and abhorrent and that the word “tampon” is as hilarious.

The sexism in the script could perhaps have been salvaged by deft directing and acting, but it’s doubtful. Gender stereotypes are so embedded in every thread of the story that it would have been nearly impossible to construct the film in a way that made for fun viewing. The sexism is maybe supposed to play as commentary on sexism and cultural attitudes about women, but instead it comes off as straight-up conventional sexism.

The real elephant in the room about Hot Pursuit is its subject. This is a feel-good cop film released right in the midst of a national conversation about problems with police. We see Officer Cooper tasing and seriously injuring suspects not once but twice, with both incidents played up for laughs. Meanwhile, Cooper is depicted as the ultimate white hat: Her father was an esteemed police officer, she’s putting crooked cops in jail, and she’s willing to go to any lengths to protect her charge. Those lengths apparently include exposing people to the risk of serious harm for the purpose of cinematic jokery, a cruel twist of the knife for those across the country currently mourning—and burying—sons and daughters killed by police officers just like Cooper. 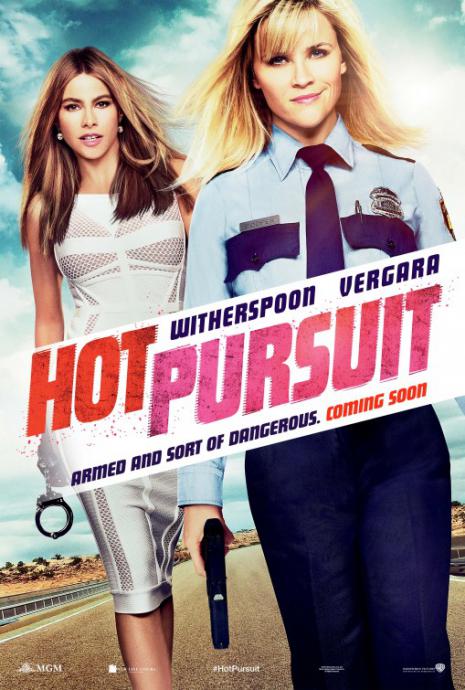 I’m all for escaping reality into a light-hearted comedy for a while, but it was impossible to not think about recent headlines about police violence while buying a ticket to a film whose poster has a smirking cop carrying a gun over the tagline “Armed and sort of dangerous.” In Hot Pursuit, earnest cops come across as too earnest, making it seem like bad cops are flukes. Meanwhile, the crooked police come across as overplayed.  Authentic depictions of cops are extremely rare and Hot Pursuit certainly didn’t pull it off. Cooper routinely disregards basic police training and if actual police officers were consulted on the film, one imagines they must be writhing in their desk chairs at the moment.

The depiction of police in pop culture matters, as it plays a crucial role in our cultural understanding of police and how we relate to law enforcement. Movies like this one create an all-in-good-fun vision of law enforcement. The bad cops are inept and the good ones catch them. The good cops sometimes break the law and abuse their privileges, but that’s all right, because they’re doing it for a righteous cause. There’s little nuance in movies like Hot Pursuit, unlike other cop comedies that do manage to probe our complicated relationship with police, and the need for reforming the role of police in society—Brooklyn Nine-Nine, for example, routinely takes these issues on in its 30-minute episodes. If scripted television—often denigrated when it comes to comparisons between film and television—can do better than a feature-length film when it comes to responsibly handling the depiction of police, it’s a bad sign for American pop culture.

In the end, Hot Pursuit is a box office flop, but not because of the way it treated law enforcement. It failed because it simply wasn’t funny, and even audiences tolerant of misogynistic, racist, transphobic, and homophobic humor can’t stand it, because the jokes just weren’t funny. In the game of Officer Cute Little Lady versus the world, Hot Pursuit was DOA.

s.e. smith is a writer, editor, and agitator from Northern California. smith serves as the Deputy Opinion Editor for The Daily Dot, and Social Justice Editor for xoJane.

Overall, I liked this article and the commentary on homophonic and transphobic jokes. That's why I found the "hick with a gun" comment a bit jarring. Terms like "hick" ring pretty classist since they're usually used to invalidate and denegrate poor rural communities.

I haven't seen the movie -- but I appreciate you taking the time to review it. I remember passing a billboard for it a few days ago and feeling this sinking feeling in my chest, as I thought about the unrest in Baltimore and nationally regarding police brutality. I'm so glad you remarked about that very important aspect of the many oversights this movie seems to have.