The Media and The OBAMA MARRIAGE | Bitch Media

The Media and The OBAMA MARRIAGE 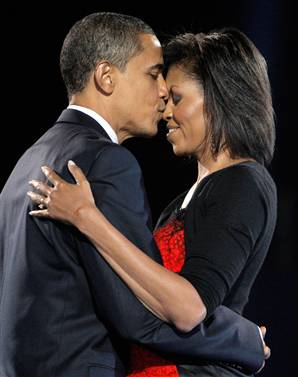 Wedding season is upon us again, but instead of focusing on that bridesmaid's dress fitting your cousin will kill you if you don't attend, why don't you focus on the only marriage that America cares about? You guessed it, the OBAMA MARRIAGE (that's right; it's in caps because it is so unbelievably important). Whether it's because they love to love it or love to hate it, members of the media can't seem to get enough of the OBAMA MARRIAGE lately. Some fun facts:

The Obamas go on dates!

Sometimes these dates happen in Paris!

Some husbands think Barack Obama is ruining their marriages by going on these dates!

Some single women are looking for their own Barack to take them on dates!

Back in the year 2000 (remember way back then?) the OBAMA MARRIAGE was in trouble! Could it be because they weren't going on enough dates?!?

Well, the reason behind it all is most likely that, a) Barack Obama made his marriage to Michelle and his commitment to his family a large part of his campaign for the presidency, b) the U.S. has had some pretty boring/crappy marriages in the White House over the years, and c) the Obamas are kind of hot. But reasoning aside, obsession with the OBAMA MARRIAGE is sweeping the nation and dividing us into three separate camps: The Lovers, The Haters, and The Republicans. Which are you?

The Lovers
Members of this camp are waaaay into talking about the OBAMA MARRIAGE and how awesome it is. They love to read about the date nights, the romantic slow dances, and the strolls along the Seine. Media coverage of The Lovers skews decidedly female, publishing articles like "What Single Women Can Learn From Michelle," Jenée Desmond-Harris's piece on finding your own Barack.
Celebrity members include: Joy Behar, Beyonce Knowles, and OPRAH
Camp Song: "You and I" by Stevie Wonder (OMG it was the Obamas' wedding song!)

The Haters
Members of this camp seem to be mainly single whiners who are tired of hearing about how awesome the OBAMA MARRIAGE is. Either that, or they are married whiners who are jealous of how easy the Obamas appear to have it (what with the private jets and all). While media for The Lovers may be gendered female, articles by and for The Haters are gendered male, the best example being Sean Gregory's piece in Time yesterday, "Barack Obama, Stop Ruining My Marriage." Why Gregory thinks he is being compared to Obama is a mystery, but the gist of the article is that Barack Obama is making America's husbands look bad by being too attentive to Michelle, and the comparison just isn't fair. (It also doesn't exist, except for in the minds of egotistical Haters.)
Celebrity members include: Jon Stewart, Harry Reid
Camp song:"Hey Jealousy" by The Gin Blossoms

The Republicans
Members of this camp are mostly, well, Republicans, who think that the OBAMA MARRIAGE is a frivolous waste of media time and taxpayer money. They also believe that the journalists are too easy on the Obamas in general, as detailed in this San Francisco Gate article, "Love or lust, Obama and the fawning press need to get a room."
Celebrity members include: Rush Limbaugh, Dick Cheney, and Ann Coulter (sounds like a fun camp, right?)
Camp song: "Let the Eagle Soar" by John Ashcroft

Which camp are you in? And why do you think the media loves to cover the OBAMA MARRIAGE?

I am DEFINITELY not a republican, but I have to agree that all this coverage on the Obama marriage is a complete waste of time. If their marriage is going well, then good for them, but I really don't care.

(I'm a lover, although not an obsessive one! :D)

I like the depictions of the Obama marriage because I think it does subvert traditional gender roles to an extent. I think it is funny that married men complain that Barack is "too attentive" and loving with his wife. Sure, their model obviously wouldn't work for everyone but it is nice to see that the first family at least looks like they have some things figured out.

But I am also not in like with how cheesy the coverage has been. I don't really care about their romantic dates. I hope they find a new angle soon.

Three thoughts: firstly, one reason some people seem to be so enthralled (mainly republicans, or racists, or both) has to do with the stereotypes that the couple breaks, especially the perceived racial ones. There are many negative stereotypes about black couples, which Rick Santorum so disgustingly mentioned in connection to his critique of the first couple. Secondly, with all this talk of how attentive Obama is to Michelle, it's important to keep in mind that he was away from his family for months in DC and on the campaign trial- maybe he's making up for lost time? Finally, no matter how much coverage there is, we'll never know how good/bad their relationship is or what it feels to be a part of it.

I'm in the Like Camp, but I was already in Obama Marriage overload during the campaign. I like the fact that they have their date night, and although it does turn into a bit of a media frenzy, I guess it's good for NYC & DC tourism. As a foodie, I'm more interested in learning about the reason for their restaurant choices than learning more about their marriage. Also, it's just the nature of even a very happy marriage that they are bound to have some bumps in the marital bliss road during his presidency. It will be interesting to see how the media handles that if it happens. Great post!

I find it hilarious that the Republicans are such haters. You'd think they'd be pleased that we finally have a couple in the White House who make a great model for all those family values they are so keen on: They support each other, they work on their marriage to make sure it lasts, they are attentive to their children and raising them in a healthy way...Oh you'd think that until you remember that they are Republicans, and therefore base hypocrites.

Whatever, I think the media frenzy is kind of annoying, but to be expected. And I think men who whine that it's making them look bad should perhaps start thinking about how it can make them look good (i.e. by being better partners). I love seeing a couple in the media who treat each other as equals, support each other, and take the time to make each other happy. We need as many good role models for relationships as we can get.

Didn't George and Laura, George and Barbara and Ron and Nancy model family values in their marriages? I don't know who's supposedly complaining about the kind of husband Obama is -- I think the gripe is that the media is obviously (come on, it's no shocker) in love with the Obamas politically and therefore overload the public with fluff pieces and little objectivity.

But I agree they seem like a very nice couple/family...it's just obvious that the other previous "husbands" in the White House weren't quite fawned over in the same way. Although I did read Ronald Reagan's letters to his wife which were truly eloquent and inspiring - we should all buy our husbands a copy of that book.