The Mexican Government Shows How NOT to Promote Breastfeeding | Bitch Media

The Mexican Government Shows How NOT to Promote Breastfeeding

“Don’t turn your back, give them your breast!” This phrase is the linchpin of Mexico City’s controversial new marketing scheme to promote breastfeeding.  We all know that breastfeeding is something healthy that helps both moms and kids, so what can be so bad about a campaign promoting it? Take a look at the ads:

The campaign features celebrities who are topless, save a photoshopped banner sporting the campaign slogan.  The images look like your typical lingerie or perfume ad: the models are skinny, with toned bodies, light skin, and flowing hair.  Let’s just say they are highly unrepresentative of the vast majority of Mexican mothers.

Close to 15 percent of Mexico’s population is indigenous, of whom the majority are of a much browner skin tone than the women in the ads.  In fact, colorism pervades the majority of Mexican ads, newscasts, and soap operas where the stars are generally light-skinned, tall, and skinny.  We all know what a harmful impact it can have on young girls and women’s self esteem when they never see see their own images represented in what is considered beautiful in their own country.

These ads have drawn an outrage on social networks, with women calling out the government’s inability to understand that their images perpetuate sexist stereotypes. The pushback successfully convinced the government to change the campaign and actually feature more commonplace mothers in their ads.

When the campaign first hit billboards, the publicist Oscar Ortíz D. Pinedo said that the government created the campaign to let mothers overcome their fear that their breasts would become deformed if they breastfeed.  However, studies show that the vast majority of new moms who don’t breastfeed are worried about practical concerns like their baby’s ability to latch on and whether breastfeeding will hurt—not their figures.

One of the campaign’s own models, actress Camila Sodi, declared that the campaign was in “bad taste” once she saw the complete version and attempted to disconnect herself from it.  A group of feminist organizations issued a public statement where they recognized the benefits of breastfeeding but emphasized that “the strategy of the Mexico City government does not successfully transmit the importance of breastfeeding and exploits cultural stereotypes and unreal beauty standards that don’t impart any information nor promote people’s exercising of their rights.” In a country where feminicides have skyrocketed over the past few decades, their statement goes beyond criticizing the campaign and also questioning why the government allows the mainstream media to continually promote sexist messages that “legitimize gender inequality, cultural stereotypes and violence against women.” These critiques were even brought before the countries national human rights commission as a violation of constitutional rights. One group of women created a campaign which women posing similarly to that of the government’s but with visible signs of pregnancy, including stretch marks. 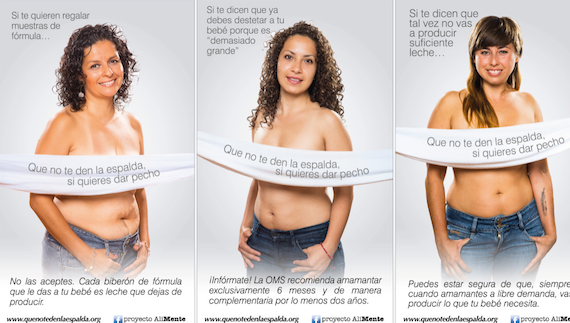 Some critics took the more humorous route and created memes taking aim at the campaign manipulating an image of Miguel Mancera, the chief of Mexico City’s government featured in the same topless pose. A group of female comics adopted the style of the video and made a satire of the popular vulgar expression, No Mames, which literally means don’t suckle, but is more commonly used to mean, “you’re kidding.” The women started a new campaign with the comic phrase “No Al No mames”—basically joking that to promote breastfeeding you must stop using this popular phrase and stop telling people to not suckle.  The comedians also remind Mexican Citizens that this million dollar campaign (14 million pesos) was produced with their tax money.  To put that figure in perspective, keep in mind that minimum wage clocks in at just under $1,500 a year.

After so much outcry, Secretary of Health Armando Ahued said that perhaps they were mistaken and agreed to rework the branding of the campaign. He had previously defended it saying that previously they had use commonplace women and that it did not have an impact.

There is a need for a campaign to make breastfeeding more socially acceptable. But this supermodel advertising spree is not the way to do it. According to a national health and nutrition survey the statistics from 2006 to 2012, babies fed by only breast milk dropped from 22 percent a 14.5 percent in urban areas and from 36 percent to 18.5 percent in rural areas. Women who breastfeed their kids in public places can face harassment and nasty comments.  “The government should have a true public policy that allows women to not feel ashamed when they take their breast out and create the proper economic and social circumstances so that they can do it,” writes Sopitas.com blogger Filosofastrillo, who pointed to a well executed campaign in the United States showing realistic looking women who are forced to feed their babies in the bathroom, to hide their barren breasts. 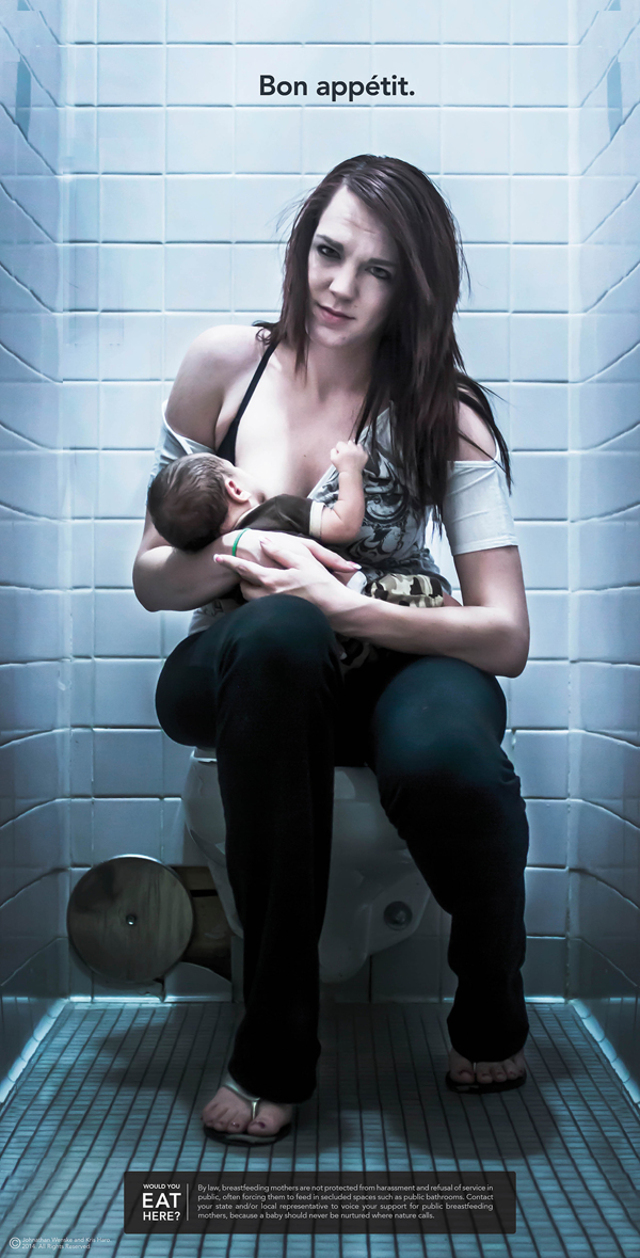 In the coming weeks, the Secretary of Health will produce campaign images that might actually appeal to breastfeeding women and also promises to create breast milk banks and spaces in government offices to allow mothers to breast feed their babies. While it is unknown how the final campaign results will turn out, it is clear that civil society and feminist critics successfully shut down the government’s absurd sexist campaign.

Andalusia Knoll is a freelance journalist originally hailing from New York City, currently based in Mexico City.  She is a regular contributor to VICE News, Free Speech Radio News, Truthout and Democracy Now!

There's a typo - I think you meant bared not barren. (That would be a problem.)

Wow, that original campaign is so condescending on multiple levels. "Don't turn your back" suggests that women who choose not to breastfeed are uncaring--beside the fact that the metaphor doesn't hold up. Bottle-feeding infants also tends to happen in-arms just like breastfeeding. Also that dude in the second image--seems to suggest that we need the boyfriend or husband's endorsement.
As a nursing mother, I totally identify with the assessment suggested towards the end of this article: that a successful campaign to promote breastfeeding would be one that targets the public and works to eliminate the shaming that nursing moms are subjected to. The problem isn't that we don't feel like supermodels when we nurse. The problem is that many of us find it difficult to get the support we need inside and outside our families.

Indeed, the second photo may be confused for people who doesn't know that actress, she is Maribel Guardia, and that's her son, she raised alone and it's like proud of that... but I think it's still weird, because she's like 50yrs old and it's far from the time of breastfeeding hehe...

The 2nd set of pictures of women with real and beautiful bodies is part of a project called "AliMente". They have very interesting information and activities that you can read, share and support here: http://quenotedenlaespalda.org/

I object to your use of the word "real". The thin women presented do have real bodies, they just aren't representative of most women's bodies. Which of course, no bodies are.

If you are referencing the probability of airbrushing, than it is important to SAY that, explicitly, because thin and toned women are real, and have real bodies. It is the idealization of these women's bodies, and the utilization of their bodies as a weapon against women who have different types of bodies that is the problem, not the real, legit bodies of thin and or toned women.

There is a way to fight against beauty standards that are a violent tool used against all women, without shaming and denying the existence and legitimacy of the women who actually have the bodies that are idealized/weaponized. Because they DO exist, and they ARE people too.

by Randa Jarrar
Auntie Randa's take on "The Simpsons" as refugees and confronting your family's fatphobia.