The Misogynist Leader of an Influential Megachurch Sparks Protest 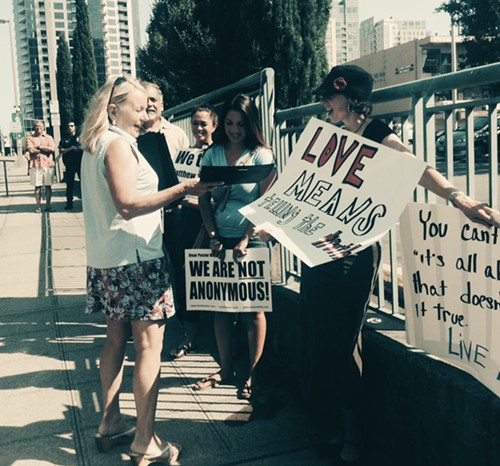 The misogynist leader of a Seattle-based megachurch is in hot water with former staff and members of his congregation.

Mars Hill is a evangelical church that Mark Driscoll, Leif Moi, and Mike Gunn founded in 1996 as a respite for disenfranchised young adults attracted to the local grunge culture. Since then, it has sprouted 15 churches in five different states, preaching a socially conservative brand of Christianity draped in a hip male-centered aesthetic: young worship leaders play electric guitar as male pastors incorporate pop culture references into their sermons, all while professing an approach to Christianity that casts women as subservient to men, views premarital sex as a terrible sin, and sees the increasing acceptance of homosexuality as a sign of the coming Apocalypse.

Now, he’s at the center of protest organized by former members of Mars Hill. This July, Mars Hill ex-members formed a Facebook group called We Are Not Anonymous as a place to voice their concerns—it now includes over 1,000 people. On Sunday, August 3, 2014, approximately 80 ex-Mars Hill Church leaders and members led a demonstration outside the church in Bellevue, Washington. In response to the criticism, the church sent out a press release saying, “This past Sunday outside our building about 60 professing Christians led a protest, left a bit of trash, and slandered good men.” Those speaking out allege Driscoll committed repeated acts of plagiarism and had a lack of accountability and financial transparency—donations that were supposed to be going directly to the church’s projects in Ethiopia and India were instead going into its general fund. The status of $3 million raised for a now-canceled Jesus Festival remains unclear and the church refuses to release their public finances that will answer questions about the salaries paid to Driscoll and the executive elders, as well as church assets under their management. 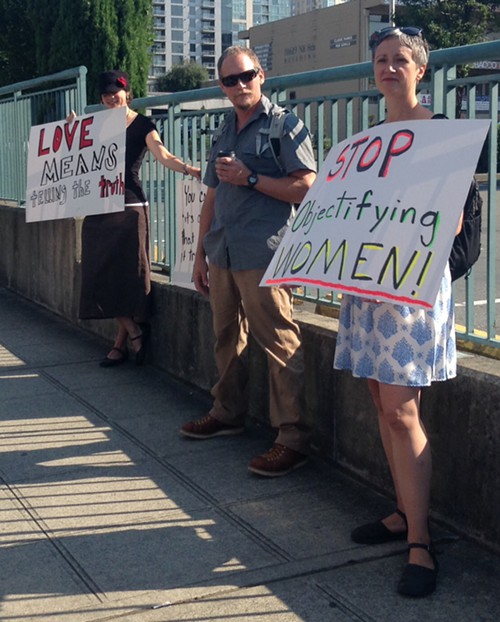 This month’s protest outside Mars Hill in Bellevue drew a substantial crowd.

Driscoll himself is a poster boy for muscular Christianity, a machismo form of the faith that’s a response to the rise of the seeming feminization of Christianity. Driscoll talks about being a devout follower of mixed martial arts and describes Jesus as a Warrior Christ. This macho approach to Christianity has contemporary company with sports icons like Tim Tebow and the secretive DC-based fundamentalist group The Family.

Recently discovered documents previously destroyed by Mars Hill illuminated how in 2000, Driscoll commented on the church’s blog using the moniker of Braveheart character William Wallace II. In graphic detail, he described how the weak feminine males at Mars Hill were proof “we live in a completely pussified nation.” Throughout his sermons and speeches, Driscoll jokes about flexing his muscles and has joked that he will break his detractors’ noses, once adding, “There’s a pile of bodies behind the Mars Hill bus and by the grace of God, it will be a mountain when we’re done. You either get on the bus or you get run over by the bus, but the bus ain’t gonna stop.”

In a 2009 New York Times magazine article about macho Christianity, writer Michael Paulson aptly described Mark Driscoll as “one of the most admired—and reviled—figures among evangelicals nationwide.” Some of the current dissent in the church started growing back in 2007 when Mars Hill’s sense of community shifted drastically when Driscoll changed church oversight from a plurality of shared leadership of 24 key leaders to a model he labeled “prophet, priest and king.” This shift in power placed full leadership responsibilities among a very select group of executive elders with Driscoll functioning as the lead pastor.

It’s desirable to dismiss Driscoll as a fringe figure similar to Fred Phelps of Westboro Baptist Church, but he’s not: he and his wife Grace published a guide to relationships called Real Marriage (Thomas Nelson, 2012) that garnered national media attention, as well as considerable controversy. For example Wendy Alsup, the former leader of women’s ministry at Mars Hill and one of the few women Driscoll respects, blogged about how this book discussed in depth the sexual and family baggage of the wife but not that of the husband. Throughout this book, one finds Driscoll using the Bible to justify his desire for his wife to be sexually available at all times, with a particular focus on her willingness to perform oral and anal sex. There’s almost no regard of those actions he should do to give his wife pleasure.

Following Alsup’s public critique, former Mars Hill elder Paul Petry and his wife Jonna formed a website in 2012 called Joyful Exiles. This site is one of several online presences formed by ex-Mars Hill leaders and members that documents and discusses what they say are Driscoll and other church leaders’ ongoing history of abusive tactics directed at those connected to this church network.

In response to the recent protests, Driscoll announced that he is going to take off six weeks while the church looks into charges against him.  Meanwhile, both Mars Hill and Driscoll have been dropped from the Acts 29 Network, an all-male coalition of over 500 Reformed evangelical church planters. Also, Driscoll continues to be dropped as a speaker at events like the Act Like Men Conference and Mars Hill cancelled their annual signature Resurgence Conference.

Robert T. Smith, a former deacon at Mars Hill, says he thinks that the protests have drawn so much attention that Driscoll may finally be listening to criticism. “Mark won’t respond to a bleeding heart story,” Smith says. “But he will respond to not being able to pay the light bill.” 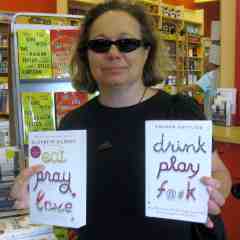 Why is preaching premarital sex a sin now wrong? It is biblically wrong, the church isn't a secular organization. It's has a purpose and there are certain beliefs that those who join agree to.
While homosexuality is also sinful in God's eyes, those who are it shouldn't be discriminated against or treated like less of Christians.

Progress is great, but we cannot just altogether change things to suit our behaviors and human inclinations. I bet if a person said they were born to love children in a sexual manner, you would all be up in arms about that because you socially believe pedophilia is terrible. Those people in South Africa who marry children would probably condemn you all as bigots as well. We humans like to pick and choose what's convenient, no problem. But God does have standards.
Premarital sex and sleeping with the same sex are blatant sins!!! Sin can be forgiven hence humans shouldn't judge BUT it pays to know and try to live right.

Because creating a culture of shame around sex and framing certain kinds of sex as "sinful" or "impure" creates a really unhealthy culture around sex. It disempowers people and creates shame around one's own body and its basic human functioning. Healthy choices and positive self-esteem don't come out of shame and disempowerment.

On the marrying children note, one word: consent.

Sex is fun and no one's religious beliefs is going to stop me from doing it:)

because christrian "morality" has been pushed on people who aren't christian as law for too long, and most of us are sick of it. and before you balk, here are the examples - birth control only being made available to married women, gay marriage still being illegal in some states, and until recently all of them, corporations suddenly having religious freedom to force their beliefs on others, laws that seek to outlaw or make abortion inaccessible, the list, sadly, goes on.

pre-marital sex and homosexuality aren't "blatant sins" to those of us who aren't christian and/or don't believe in god, thus what we do is none of your concern.

Christ, rape is biblically sanctioned, and blended fabric is forbidden. The Bible is really clear on both those things. You do your own picking and choosing when you wear poly-cotton blends and don't force girls to marry their rapists like they did back in the good old biblical days. Of course, you could also ask yourself, well, if the bible is a bit off on the rape question, maybe the bible isn't the best rubric by which to judge a moral life. Heavens no, instead you should try to force it on others, because progress can only progress so far.

If you're going with a bible-based theology, premartial sex is a maybe. After all, a man is allowed to sleep with his slave (no mention of women being able to do the same, but based on other rules, I'm going with an emphatic "Hellz, no!") . We're not down with that anymore because 1) consent and 2) SLAVE. Given the time and culture the bible was written in, a lot of things in it need to be re-interpreted for modern lives. Is sex one of them? You need to decide that for yourself. I vote yes, but that's me. The god I believe in is an all-merciful, all-powerful entity who cares more about the fact that I'm an asshole to people, than the consentual caring sex I had with a dude I wasn't married to.

The article says "views premarital sex as a terrible sin." Not just a regular sin. Most people know that the Christian faith frowns upon premarital sex, but even some of the most devout Christians I know take part or have thought about doing it. I know it's right after "thou shalt not kill" in the ten commandments, but there are levels. The use of the word terrible makes me believe that this church thinks premarital sex is up there with murder, while most people would consider it a much lesser sin than such. Christian or not.