Surprise! “The New Normal” is New and Also Normal

A sitcom about a married couple who loves each other, wants a baby, and has wacky acquaintances is hardly groundbreaking new territory for network TV. NBC’s new Ryan Murphy show The New Normal is another in a long line of focused-on-the-family television fare, but with one significant twist: The married people at its center are gay men. That’s interesting, sure, and I’m all for more diverse representations on the big networks, but it doesn’t change the fact that this is a standard, predictable, dare I say “normal,” new show. Bryan (The Book of Mormon and Girls’ Andrew Rannells) and David (The Hangover’s Justin Bartha) are an adorable couple with a nice house and even nicer clothes. They conform in many ways to traditional sitcom married couple tropes: One (David) is sensible, responsible, straitlaced, and loves watching sports while the other (Bryan) is flighty, impulsive, emotional, and loves to shop. They decide to have a baby after Bryan buys a miniature cashmere cardigan at Barney’s. Because gay!

I did laugh at that Mariah Carey joke.

Bryan and David choose to use a surrogate, a nice small-town young woman named Goldie (Georgia King) with a 9-year-old daughter named Shania who could out-precocious that bespectacled kid from Jerry Maguire who knew all those facts about bees. Wacky enough for you? But wait, there’s more! Goldie’s nana (Ellen Barkin) is along for the ride, and she is also a bigot. It’s obvious we’re supposed to laugh at her ignorance and her homophobic/racist/anti-semitic jokes, but they left me feeling uncomfortable and tired. The best Barkin moment (and she is undeniably a great actor) came when she admitted that her homophobia stems from her marriage to a closeted gay man. I hope we get more emotional moments like that from Barkin, but something tells me we’re likely to hear more “black and gay stew” lines instead. LOLz!

Nana’s racism is directed at Bryan’s assistant Rocky (NeNe Leakes) who uses Bryan’s money to buy herself diamond watches and admittedly kickass shoes. Yes, we’ve only seen the pilot, but so far Rocky functions mainly as a punchline for the white people in the room—though she did get one good dig in at Nana, and considering the two women’s love of pretty hair and fine jewelry, my fingers are crossed for a charming friendship between them.

At its heart, The New Normal appears to be a sweet, sentimental show along the lines of Modern Family and every other sitcom with a baby on board. Murphy tries to inject a bit of edginess with the gay jokes and the bigot jokes (and the aforementioned precocious 9-year-old), but this show is as soft and cuddly as the newborn Goldie will presumably give birth to at some point. Speaking of, it’s hard to tell where this show will go once the baby is born (my guess is that they’ll stretch the conception and pregnancy processes out for at least two seasons), but it’s likely to be charming, sappy, and safe.

To be fair, Murphy has his reasons for wrapping his “controversial” show in a family-friendly package. For many, the premise of a gay couple having a kid is, in fact, controversial. One Million Moms organized a protest of the series, and one Utah affiliate has already refused to air the pilot when it premieres on September 11. With knee-jerk jerk-y reactions like those, it’s no wonder Murphy and NBC are playing it safe—but it doesn’t make The New Normal any more exciting to watch.

Hulu is streaming the first episode before the show premieres, along with The Mindy Project and a few other pilots. While it doesn’t make for thrilling viewing, a few of the performances—Barkin’s and Rannells’ especially—make The New Normal worth a watch.

While I see you have gotten some points of the sitcom correct, there needs to be a wider scope when reviewing this show, Now, it is called "The New Normal." Meaning two men who love each other seen in BED ("Modern Family" never did that!!) doing what couples do, talk. There is no over the top gay angst, overbearing father or mother or a convienient lesbian thrown in for good measure, unless NeNe Leeks starts a new career as a sassy black one. Here the show seeks to demonstrate that a gay couple wants to live thier lives just like everbody else and are not plotting the destruction of the American family or seeking to overthrow some Christian value that is a hot Tea Party topic this week. Justin Bartha makes the sitcom as he is the "I didn't know you were gay" character, which echoes Will Truman from "Will and Grace." His three dorky and straight friends do not make a big deal that he is gay as he is just "one of the guys", better looking and better dressed, but just a bud. Georgia King's Goldie is every girl we knew in High School who made mistakes but was never jaded and lived up to her responsibilites no matter how many creeps she chose to date. She is the girl your Mom wishes you would bring home instead of Brittany. Any Brittany. Combine Ann Romney and Callista Gingrich and add a healthy dose of Ann Coulter and you have Goldie's nana (Ellen Barkin) whose portrayal of women see every day on our news shows is spot on. Coulter would call her a "lightweight." The show works on several different levels and surpasses the insanely predictable and boring "Modern Family". Shania is your average smart kid (I was one too) that finds fitting in with "average" children a struggle but still keeps a rich fantasy life. As grown ups we have to put with with "average" adults but we also keep our fantasy life. This show, if it continues to stretch it's bounderies will be a hit.. Any show that pisses off someone in Utah has to have redeeming social values. 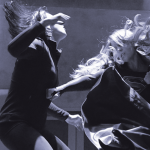